This page details one or more prototype versions of Sonic Mega Collection.

While the logo wasn't really changed, everything else was. A Japanese version of the early title screen is present in the final. It also plays the extended title music heard in the Demo FMV, which is absent here. When going from menu to menu, or a different game, the music stops once the screen goes black, instead of as soon as the player has made a decision.

When the game starts up, the first thing you see is "Licensed By Nintendo", which doesn't appear in the final. 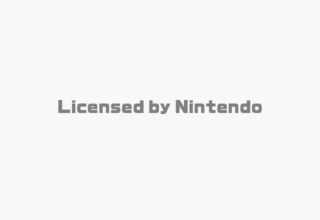 The version of Sonic Spinball used is the first revision, which included two Sonic 1 songs; the final version uses the (much more common) second revision with Howard Drossin's music since Sega doesn't own most of the Sonic 1 soundtrack, and hadn't licensed the music for Spinball.

Both Flicky and Ristar are absent from the game selection.

Sonic CD was originally supposed to be on the disc, but it wasn't due to "emulation issues" and "disc space" (the latter is debatable since the disc had plenty of space left that was taken up by Japanese demo screens and three unused videos). Sonic CD is on the menu, right there, for all to see. 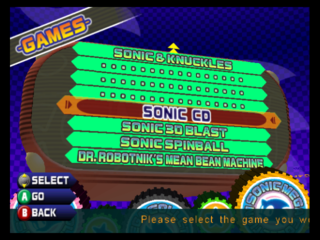 Selecting brings up an explanation like the other games, and you can view its European manual. 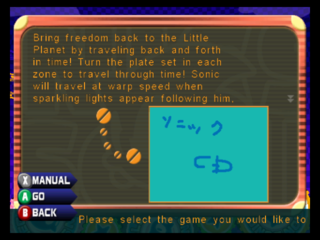 The picture is a placeholder image with crude Japanese writing with "ソニック CD" (Sonic CD) written on it. It remains in the final, albeit unused. Loading the game just brings you to Sonic the Hedgehog. The description reads:

Sonic the Hedgehog: The Movie

The extras menu contains two entries for Sonic the Hedgehog: The Movie/the Sonic OVA, both being for part 1 and part 2 respectively (like how the original Japanese version was two parts). Its possible that "space limitations" or licensing issues prevented the film from being included, and no other references can be found on the disc. Their descriptions read:

Located in the root of the disc is an uncompressed ROM called sonic3.bin. This is actually the Japanese version of Sonic the Hedgehog 3, and is unused because all the ROMs are located in sonic\us\roms.

A very strange image of a blurry block with the Japanese character あ, which means "Ah". There are also some dark yellow lines that appear to have been cropped from a much larger image.

resident.tpl, gm_resident.tpl, and gm_resident2.tpl have graphics from EX Jinsei Game II (EX人生ゲームII), a PlayStation 2 game that was released almost a year later (November 2003) by Takara.

Developer VR-1 Japan had previously developed Jinsei Game titles for Takara under its former name "POW Games", so it's likely they were also working on EX Jinsei Game II at around the same time as Sonic Mega Collection.

Above isn't all the graphics, but you get the idea.

Here is a translated table of the discernible tidbits of Japanese on the graphics (going from top left to bottom right):