In Sonic Riders, you play as Sonic and his friends (or the newcomer Babylon Rogues) as they ride (obviously) air-based hoverboards, skates, and bikes in a race to win the World Grand Prix.

A test level was found in the PC version of the game. It is a long, oval track with no interactable objects, aside from some item boxes and the lap finish line, and some missing textures that were replaced with custom textures by modders. Invisible walls prevent you from falling off the track. Discovered by Yacker, a veteran coder from the Sonic Riders Competitive Community, while modding the PC version of the game.

Present in the PS2 version's executable are a couple of strings related to the libraries used for this game.

If you create a folder called "ScreenShot" in the PC version of Sonic Riders and press the F11 key, the game will save a screenshot to the folder.

Note: Out of the box this feature doesn't work on modern OS, because the developers set the DISCL_EXCLUSIVE flag in the call to DirectInput's SetCooperativeLevel function. This causes the game to swallow keyboard input messages, blocking hotkeys, including their own. 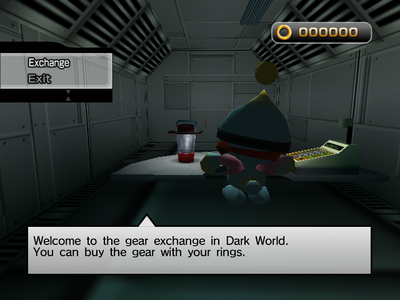 The Chao that runs the shop has its lower body fully modeled but this can't be seen normally due to the fixed camera showing you the front only.

In the Windows version, every character in the non-CG cutscenes that has eyes has their eye pupils fixed to a forward-looking position and not moving around. This is not seen in any other version of the game.

In the last non-CG cutscene in the Babylon Story Mode, some characters (mostly Sonic, Tails, and Knuckles) appear to have their mouth misplaced on their face. This bug is also present in the GameCube and Xbox versions.

There's no decrease to the volume of the background music in the PC version. This bug occurs in places such as:

In the gameplay, characters have lines for landing a trick correctly, as well as incorrectly, attacking others, being attacking by others, etc. In the Windows version, almost every character has lost lines for at least one of the above in the English voice bank; however, the Japanese voice bank has no missing in-game lines.