This page details one or more prototype versions of Sonic Rush.

The E3 2005 demo of Sonic Rush allows playing of an early version of Zone 1 Act 2, followed by the first boss battle. Only Sonic is playable.

A few bugs were fixed by the final:

The icon that would display on the DS menu has a three pixel difference in Sonic's eyes.

The background music in this build is composed by Teruhiko Nakagawa and is similar to the musical style of the Sonic Advance games, as opposed to the pop-inspired style by Hideki Naganuma used in the final.

The demo recycles voice clips from Sonic Advance 3, when Sonic was still voiced by Ryan Drummond.

Placeholder files for both Acts of all seven Zones from the final are present, but most are blank and unplayable except Leaf Storm Act 1, Leaf Storm Act 2 (which is normally available), Water Palace Act 1, and Dead Line Act 1. 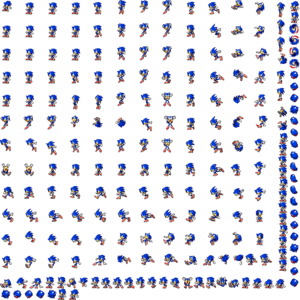 Sprites for Sonic and the Akatento badnik from Sonic Advance 3 can be found in the overlay files. These can be seen in-game by exploiting a camera glitch (which doesn't work in the final game) or a savestate corruption that is saved at the split second the sprite appears that causes Sonic's model to disappear. 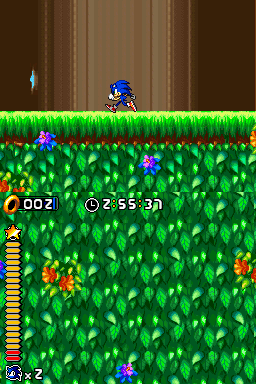