Released by drx as part of the February 23, 2008 proto dump, this was a semi-early build of Sonic 3D Blast on the Sega Saturn, dated October 8th 1996 (Exactly one month before its final American build date).

Several Zones either have unfinished art, or borrow art straight from the Genesis version. 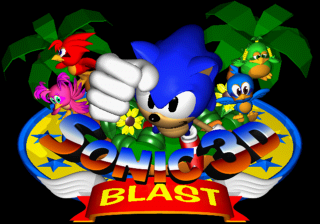 The title screen is a higher quality version of the one in the Genesis game.

The menu buttons use a more watery texture, and also all buttons are start, as previously mentioned. The background also uses a higher quality version of the menu background seen in the Genesis game's 825 prototype.