This page details one or more prototype versions of Sonic the Hedgehog Pocket Adventure.

A prototype was dumped on January 2017 by drx of Hidden Palace fame. The prototype is dated from October 22, 1999 and has a decent number of differences.

Unlike the final version, these are present and don't crash the game. They use South Island's tiles and can be fairly glitchy. 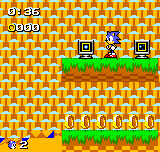 This stage is pretty simple, it features a ramp with a line of rings and a platform with shield and invincibility monitors, after that there's a straight line with some buggy tiles which have strange collision, a bridge appears after the glitched tiles that leads to the Mecha Sonic fight, after it's defeated the normal cutscene happens (though it is a bit glitched cause it's not Aerobase's layout) and Sonic is placed in Test Stage 2. 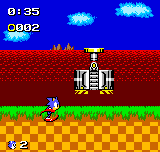 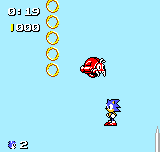 This stage is even simpler than Test Stage 1, it has no tiles or background, instead it has a light blue color throughout the level, it has a vertical line of 5 rings on the spawn area, a Motobug is also there, but it doesn't spawn when the player enters the level, the player has to go away from the beginning area and back into it to spawn the Motobug, right after the Motobug and rings there is a fan object from Aerobase, right beside it there is an invisible platform that lacks collision on the bottom, there is one of the tubes from Secret Plant in the level which shoots the player up the course, a Clucker can also be seen from Aerobase, and after that it's a straight line to another fight with Mecha Sonic, after it's defeated, the Mecha Sonic defeated cutscene happens and after it ends the game hangs on a black screen.

Unlike the final version, there exists a Motobug in the game. There are two variants in the game - one red, one yellow. They are also the first two objects listed in the game too.

Retrieved from "https://tcrf.net/index.php?title=Proto:Sonic_the_Hedgehog_Pocket_Adventure&oldid=1334963"
Categories:
Cleanup > To do
Games > Games by content > Prototypes
Games > Games by series > Sonic the Hedgehog series