Sonic Classics has Sonic 1, Sonic 2, and Dr. Robotnik's Mean Bean Machine all in one, handy Mega Drive/Genesis cartridge. Sonic Classics (known as Sonic Compilation in Europe) was one of the first ever multi-game Sonic compilations to be released. The game was sold in the mid-to-late 90's, in the Mega Drive/Genesis' last few years before being discontinued (in most regions), and it's clear this game was produced for the sole purpose of making a few bucks before the dying console became completely irrelevant. The exact release date for Brazil isn't known, but it was probably released in early-to-mid 1997. 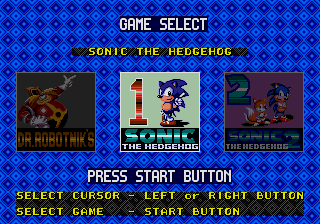 A shaded font. That's pretty much it.