This page details one or more prototype versions of Sonic Unleashed (Xbox 360, PlayStation 3).

The Xbox 360 Preview build of Sonic Unleashed is a debug build from in between the E3 demo and final build, predating the latter by almost two months. Unfortunately, only the first disc of this build has been found and dumped, and the second is most likely lost, but even the disc that we have has a wealth of differences compared to the final. The build date is unknown, but three were found.

The preview build videos are quite obviously placeholders, as the lighting on the characters is very basic. The particle effects and Werehog fur shader are also missing, as well as any audio that isn't the character's voice.

Aside from this, the scenes were re-animated as well. Sonic transforming into the Werehog is basically just a more detailed version of the preview video, but vice-versa omits Sonic's little hop at the end.

The title screen was adjusted in the final to wait until the player presses Start before panning up to show the cracked planet.

Though a work-in-progress version of the final menu is accessible from the title screen in this build, the old main menu from E3 still exists in the files and can be accessed with the "Install" debug menu.

While the level model and textures are missing, the collision and object layout for a version of Savannah Citadel resembling an early trailer can be found.

The following strings are drawn to the screen when playing pre-rendered cutscenes.

The player's coordinates are drawn in this format in-game.

Can be used by pressing LB, RB, Back and Start in any order. This key combo restarts the game, likely referencing the command used on the Nintendo DS to restart software.

Can be used by pressing LB and RB. This key combo immediately maxes out your Boost Meter, only has an effect in-game. 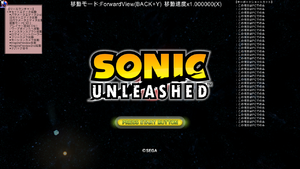 Can be accessed by pressing RB 10 times in quick succession then Right Stick, pressing again closes it. Doing this once on a bootup ensures Right Stick presses load this menu. This disables movement of the mouse cursor and makes it visible. In-game can also freely move Sonic through collision. There's a bug where the UI is not removed when loading or exiting a cutscene with the menu open but reloading the menu fixes it. It's really wise to not choose options when playing cutscenes as the game will crash. 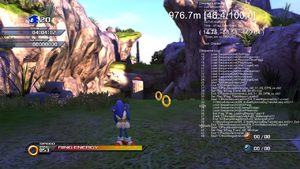 Can be accessed by pressing the Left Stick and X, pressing again closes it. This can only be accessed in a level. 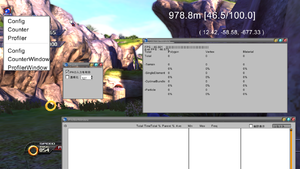 Press LB, RB and B to show the debug UI texture and a cursor to be controlled. You can also move or resize windows or the debug button by holding A and moving the stick. Clicking it with the cursor will access the Developer Menu, pressing it again will exit it. Using Y in the combo disables the cursor and just shows the icon as well. The game still reads general inputs so be careful when using it. You can also simply drag the debug button to move it for a session. Every change to the UI is reset after reloading the menu.