After the success of Mario Party, Sonic followed in the plumber's footsteps in the party genre with Sonic Shuffle, which was unsuccessful thanks to the cheatsy AI and excessive load times (not as bad as that Sonic game from 2006, mind you, but still pretty annoying).

Present in the SUBPROG directory are files for debug tools, such as a model viewer and a level viewer which includes a small debug system. To access these features, replace TITLE.BIN with any of the below files: 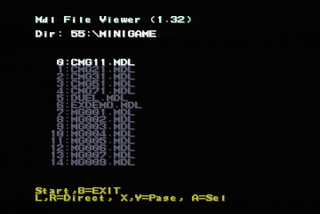 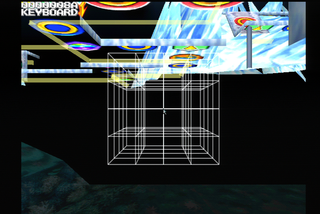 Lets you view the game's maps. This uses the Gindows debugging system seen in the Rez prototype and Scud Racer early SDK sample. 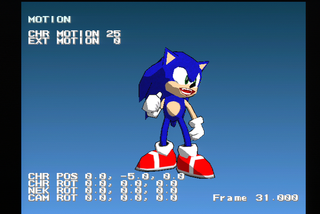 Lets you view character models, although only Sonic, Tails, Knuckles, Amy, Illumina, Lumina, and Void can be selected. Note that this file is referred to as "High Poly Viewer" within 1ST_READ.BIN.

Only available in the European release, the game allows you to choose which frequency it should use for its display signal: 50Hz or 60Hz.

The US and Japanese version of the main menu do not have the "LANGUAGE" option, where it would be necessary for certain European regions to change the language to understand the game.

In the US and Japanese releases of the game the file MOJI.PVM in the MISCDATA directory is an archive which contains textures related to the game's fonts. The file within this archive called hanyo.pvr is texture of a font with alphanumeric characters 0 to 9, A to Z, lowercase a to z, as well as ! and ?.

In the European release of the game there is no MOJI.PVM and instead there are four other 'MOJI' files, the latter of which add diacritical marks to support more languages used in the European region.

Eight 1024×768 wallpapers can be found by placing the Dreamcast disc into your computer. The files on the disc are 24-bit bitmaps (BMP), but here they have been converted to PNG.