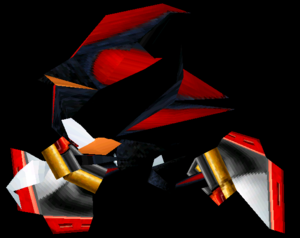 When Sonic performs the Light Dash, an afterimage model can be seen for the duration of the technique. This isn't the case for Shadow, but he does have the appropriate model stored within TERIOSMDL.PRS, along with the rest of his model data. 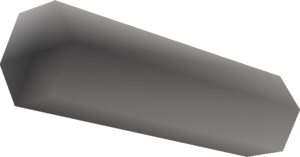 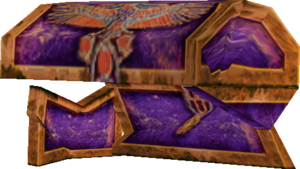 An unused broken version of the treasure chest found in Wild Canyon. 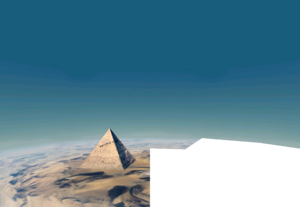 A more primitive version of the skybox seen in Grind Race.

It's well known at this point that Sonic's shoes were changed to Soap Shoes late in development, however the majority of SA2 was done at that point, so there's a bunch of leftovers.

The Hero Story intro has Sonic wearing his classic shoes until he jumps onto the wing, the shuttle launch scene in the Dark Story still shows them (likely due to it being a prerendered cinematic), and one of the screenshots in the credits shows his classic shoes. All three of these were fixed in Sonic Adventure 2: Battle, but all of the game's artwork still depicted him in his classic shoes prior to the 2012 Port.

Present in all of Sonic's cutscene texture files (E###TEXTURE.PRS) are textures for the shoes, the original Light Speed shoe upgrade, and a number of blank files. Of note is that these textures feature red soles, as opposed to the gray soles seen in The Trial and early screenshots.

The Trial's textures can be found in the scene where Sonic & Shadow turn super. 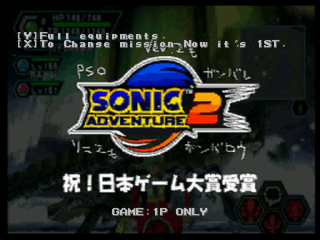 There is a debug menu in all versions of the game which is accessible by replacing ADVERTISE.PRS with TITLE.PRS.
For the GameCube version, replace advertiseD.rel with titleD.rel or use the NTSC-US Action Replay code:

The menu has the following options to choose from:

The GAME and DEMO options will ask you to choose a character or character set and a level. The list of levels includes all that character's normal stages, Chao World (misspelled as CHAO WARLD) and the test levels (BASIC TEST, SONIC TEST or KNUCKLES TEST), which do not exist and crash if you try to select them.


The Event Test not only lists all the events and allows you to view them, you can also stop cutscenes with the B button, and speed them up or slow them down with the shoulder buttons, even making them run in reverse.

The debug menu uses an older demo cycle which has both a different character order and stages for Eggman, Knuckles and Shadow. As previously mentioned, these stages have reserved cameras for demo playback that are never normally seen due to the changes:

The Trial, Preview and May 7 prototypes all contained an extensive Debug Mode that could be accessed by enabling certain flags. In the final version, this mode has been entirely removed with the exception of a few leftover features:

Sonic Adventure 2 includes the same free movement mode from the previous game that lets the player move a character anywhere on the map. c The controls are as follows:
Analog Stick = Move
Analog Stick + X = Move Up/Down
A = Exit Free Movement mode.
B = Go to the current character's start position.


During development all characters were able to enter this mode, but in the final game this mode no longer exists for the treasure hunting characters (Knuckles, Rouge, Chaos and Tikal). It can be seen by setting their Action ID to 58.

Board in Metal Harbor

In the trial, a flag can be enabled that allows Sonic to gain access to a board by pressing Y on the second controller. This flag is enabled by default in the final game, but its functionality has been removed almost entirely with Metal Harbor being the only level in the game that the feature will still work in. This was fixed in the GameCube release. 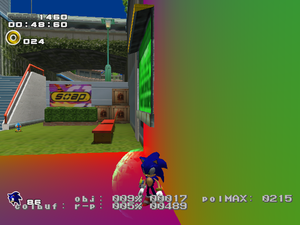 While it can't be seen in-game normally, the only remaining part of the debug display left in the game is a mode that when activated will highlight any geometry the character is currently colliding with. This mode is still present in future releases.

Located in TEXT_E.prs is an early level and boss list, missing several stages present in the final game and featuring some interesting boss names.

Knuckles and Rouge have hint files for Cannon's Core, but their contents appear to be exact copies of Wild Canyon and Dry Lagoon's Japanese hints.

Each stage contains a number of Japanese placeholder strings. The first message always occupies the default message slot and displays if an Omochao or other text source is created via hacking without a valid message ID. These are the only messages in the game that use colors.

If the game disc is inserted into a PC, a set of wallpapers can be found:

BIBLIOGR.TXT is a short history of Sonic games up until the game's release.

The game runs a disc check to make sure it is being run from an official GD-ROM rather than a copied disc. If this check fails, Eggman will fall through the floor when he starts his section of Cannon's Core, although the level can still be completed by navigating to the end. This cannot happen on emulators, even when using a pirate copy.

In Sonic Adventure 2, each character is represented with a specific musical genre for their theme songs and levels. Sonic's are high-energy rock, grunge rock with a focus on bass and vocals for Shadow, energetic rock/synthesizers for Tails, industrial metal for Eggman, hip-hop and rap for Knuckles, and fusion jazz for Rouge. The final level Cannon's Core implies that it would emphasize this all the more so, if not for two skipped files that follow the game's internal C_CORE_X.ADX music file naming scheme.

In a filename-skipping situation similarly found in another certain Sonic game, the file order omits two slots in the directory for unknown reasons. If we follow the aforementioned genre scheme, with the segment order and the character featured, we can infer that each segment had a unique individual track for each character (and by proxy, the corresponding represented genre for them). The industrial-theme track "C_CORE_2.ADX" would suit Eggman more than Rouge and Knuckles, for one.