Shadow the Hedgehog loads up and goes grimdark!

Word 0x805EC170 in the USA GameCube version allows us to set GameMode State, giving us access to some debug/testing modes

A menu controllable with the D-pad and Start button to select in PORT1 allowing to play any SFD in the game. Shows additional debugging information while the cutscene plays. 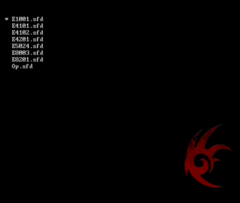 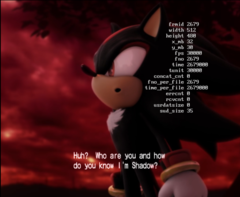 A stage select menu found only in the PS2 OPM 102 Demo of the game. Functionality seems to be broken, even loading "stg0100 (City1)" which is present in demo version crashes.

Can be accessed by pressing R3+Circle at the title screen.

Boss stages and test stages are not selectable in this menu.

The GUN Soldier loads different textures depending on the stage id.

0 is the default case but is never observed in the game. 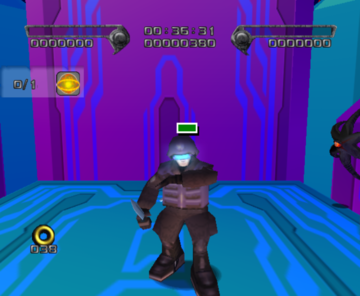 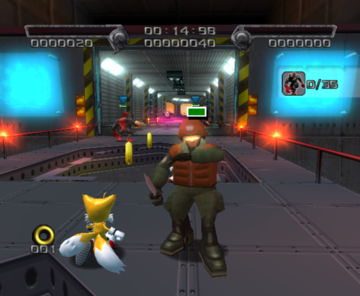 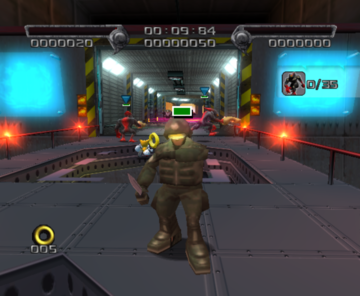 The game's root contains a file named debugmodels.one (4,972 bytes). Within the file are several DFF files named "CAPSULE_MODEL", "CONE_MODEL", "CUBE_MODEL", "CYLINDER_MODEL", and "SPHERE_MODEL". The file is loaded at game boot.

The game object: SetOBJ[25][92], "DebugMissionClearCollision" uses the Cylinder and Sphere models to create a spinning 'M' inside a sphere for the object. 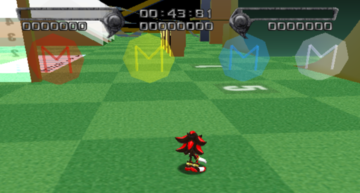 The PS2 version of the game also contains DEBUGMODELS_HI.ONE (41,260 bytes). Within the file are the same models but each are much higher poly versions. 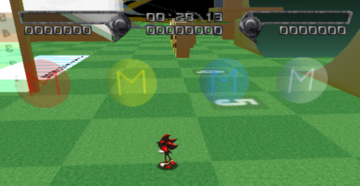 The "character" folder (which contains the model data for Shadow, the Shadow androids from multiplayer mode, and the friendly NPCs) has a file named eshadow.one. It contains a copy of shadow's models and texture from shadow.one with different render flags assigned to the model files, to give a transparent look as if Shadow had Espio's chroma cammo technique from Sonic Heroes.

This file is loaded by stg0200 (Digital Circuit) and stg0403 (Mad Matrix), but goes unused. Model is shown below as it appears when enabled in NGC version, and with a No Bloom hack applied. 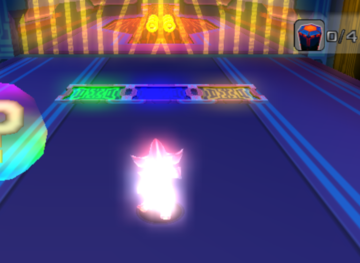 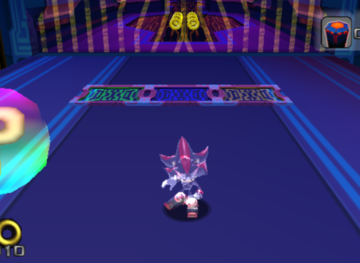 SetOBJ[07][E5] This game SETObj is unused yet has a full model, texture, animation, and game behavior coded for it. setid.bin has no stages linked to this object. However the data for the object can be found in stg0403/stage0403_gdt.one (Mad Matrix). labeled "WAKKA".

The object is a large hollow hexagon and spins at a fixed rate. It resembles the hexagons found on the circuit paths, but much larger.

There is no player collision with this object, suggesting it may have been decorative.

An early VFX pass on the cutscene of the Eclipse Cannon's firing shot. It features unfiltered audio of Black Doom's voice in both English and Japanese on separate channels. It can only be found in the Xbox version of the game as E5022.sfd.

A large amount of unused animations remain, mainly for Shadow. Some Sonic Heroes animations (ported to Shadow's current model skeleton) exist, such as the TrickRing animation.

This test level is made of a flat surface with various areas to test physics including several paths that twist around. 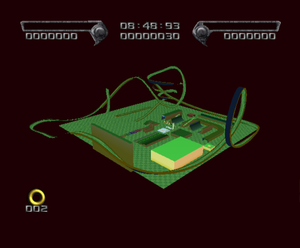 Physics testing map. Has lots of testing areas for slopes.

Has UV Texture test geometry and a single spline.

stg0005 is loaded by all game versions during the Sky Troops intro in-game cutscene (event4201_sceneA). In most game versions the stage is actually empty.

In the GameCube version (all regions), the developers forgot to remove the original event creation stage. You can briefly see some of the test stage in the background during the event.

It is highly likely the stage was used as the base when creating the event scenes in the game.

Stage 9900 is found only in the GameCube version and contains several oddities:

All of the different region Xbox .xbe have different headers; however build date and time is identical.

Pre-Oct 16 builds, the US version of PS2 and GC only, have what is known as Chaos Control Glitch (CCG) in the speedrunning community.

In the affected builds, there are 1-3 frames of input available when activating a checkpoint, allowing to execute another action in these frames.

The EU GC version has some functions shifted around compared to the JP GC build, but in-game differences have not been noticed/documented yet.

There is a change to BkWorm (any variant of Black Arms Worm) object's AttackCallback behavior.

EnemyAIState_BKWormAI_WaitAppear: underground, the player has not yet gotten close enough for its shadow to appear and trigger it to surface

- Built prior to October 16 (GameCube US and PS2 US versions):

This difference means with a vacuum or lock-on type weapon the BkWorm can be defeated before it ever surfaces.