This is a sub-page of Sonic Origins.

This Retro Engine version of Sonic 3 & Knuckles was created specifically for use in this compilation, and it has numerous improvements and changes when compared to the Genesis original. 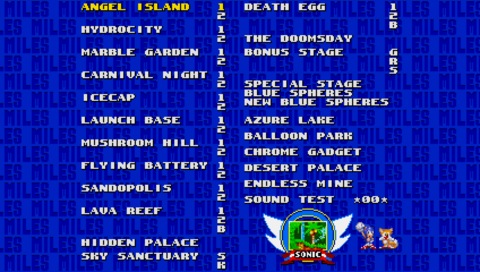 The Level Select is enabled the same way as in Sonic the Hedgehog 3: Up, Up, Down, Down, Up, Up, Up, Up. Notably, Origins removes the requirement of needing to enter it in the rather narrow timeframe between the Sega logo background turning black and the white flash just before the title screen.

If performed correctly, you will hear a ring chime. Then, scroll down the list of menu options and select Sound Test. As in prior games, the Sound Test allows several cheats:

Alternate versions of the "Press Button" text, reading "Press Start" and "Touch To Start". "Touch To Start" appears to be a leftover from the initial mobile proof-of-concept Taxman & Stealth had made in 2014.

An option on the title screen for the Blue Spheres modes. It's selected through both the collection's main menu and the Level Select.

All of the previously unused bonus stage spheres. In addition, there's also a new "?" sphere. This is used for when the random monitor cheat code is enabled.

Monitor icons for a clock, three shields, an Emerald, and a spring. Similar icons appeared on the previous remasters of Sonic 1 and Sonic 2:

The Clock monitor appears in Sonic CD's Debug Mode, originally meant to cause a time freeze effect but doesn't work properly there.

Sprites of Knuckles piloting the Tornado.

An older version of Eggman & Eggrobo's sprites, which features Eggman with black glasses.

An unshaded ball with "TEST" written on it.

Sprites of Eggrobo in the Egg Scorcher Mk.III in the background of Angel Island Act 2, zooming away during the Egg Drillster Mk.II fight in Marble Garden Act 2, a version of him in the Egg Mobile in a variation of the post-Big Arms graphics, and in the Egg Inferno in the Lava Reef Act 2 boss sub-Act. Only the Angel Island Act 2 sprite is currently unused in regular gameplay.

A test stage with simple graphics and lots of slopes. The Taxman previously mentioned that "Blueprint Zone" was made to test RSDKv5, and the object graphics for the stage could be found in earlier versions of Sonic Mania, suggesting this to be a very old leftover.

The game appears to be based on Sonic Mania, as there are a lot of leftovers from it hidden in the files and codes.

Retrieved from "https://tcrf.net/index.php?title=Sonic_Origins/Sonic_3_%26_Knuckles&oldid=1330414"
Categories:
Cleanup > To do
Cleanup > Works In Progress
Subpages