From The Cutting Room Floor
< Proto:Sonic the Hedgehog 2 (Genesis)
Jump to navigation Jump to search
Other languages:
English • ‎polski • ‎русский 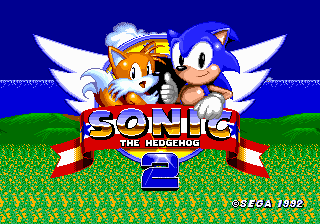 The Nick Arcade prototype of Sonic the Hedgehog 2 is a very early build with many visible remnants from Sonic 1, such as level names and music. It is very incomplete, with missing enemies and levels plus graphical glitches everywhere. However, the basic layouts for a few levels have been completed, and Tails has been implemented.

The prototype was dumped by drx and released to the public on November 7, 2006. It was given its name due to its similarity to a version of Sonic 2 that was showcased on the last four episodes (81-84) of the game show Nick Arcade, as this build appears to be very close to (if not exactly the same as) the build used on the show; two of the episodes can be seen here and here, and all four can be viewed on Paramount+.

As an additional note, this is the only known Genesis cartridge to use a holographic label, which was scrapped as it would make production costs for the cartridge itself very high. 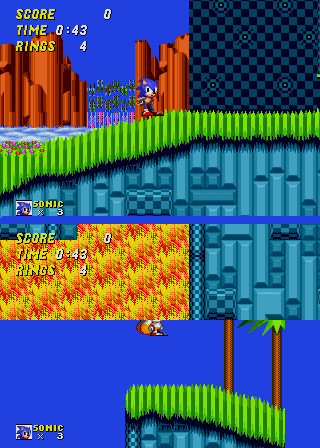 The title screen is different, with a particularly well-known design: not only does it appear in the Simon Wai build, it also appears in the final game's instruction manual, as well as the Master System and Game Gear versions. The version seen in the manual is the same as the second picture above.

The game cycles through four demos: Chemical Plant, Emerald Hill (2P), Hidden Palace, and Hill Top. This would be the last time that new demos were recorded for the game before the final build; all other prototypes use the inputs from this build.

Sonic's sprite in the Nick Arcade and Simon Wai builds is much closer to his design in Sonic 1. His idle frame is identical except for shorter shoes and an added shine on the side of his head. The August 21 build changes the shape of Sonic's eyes and adds some shading to the top of the eye.

Sonic's blinking frame in the earlier prototypes is a bit strange. It looks less like his eyes are closed and more like his pupils are all all the way at the bottom of his eyes. The final game thankfully adds flesh-colored eyelids to the sprite.

Sonic's eye design wasn't updated in all frames: In his looking up and crouching down animations, they just added shading to the top of the eye without actually changing its shape.

Sonic's walking animation has 12 frames of animation in earlier versions compared to the 8 frames seen in the final sprite. The minimum animation speed is also double what it is in the final game, and shows much more of the American "mohawk" design.

One of the easiest to see changes: In the Nick Arcade and Simon Wai builds, when Sonic runs, his shoes and legs go into a cartoony blur. This was toned back in the final version to as it was in Sonic 1, just affecting his sneakers. Oddly, these early sprites were used in a teaser for Sonic 4 - Episode I. This kind of sprite was later reused in Sonic Mania whenever he or Knuckles are going full speed.

Sonic's skidding animation is very different here. It starts out with a new, unique beginning before reusing a few frames from Sonic 1, then turns around and starts pushing in the other direction. The final two frames will loop until Sonic either stops completely or does a different action. The beginning of the animation was later reused in Sonic Mania.

In the original game, Sonic's body moves but his hands didn't. In the early prototypes, his hands move but his body stays level. The final sprite splits the difference and moves the body and hands in different frames. Oddly, there is orange coloring on his shoes, because the sprites were based off of Sonic 1's sprites plus a minor coloring oversight. This orange shade would be the darkest shade of red if given the first game's main palette.

The balancing animation is just a faster version of the Sonic 1 animation with added head shine and an orange mouth, due to sprites being based off of Sonic 1's sprites plus, just like the pushing animation, an oversight in the sprite's coloring. The final game adds four new balancing animations based on how far Sonic is from the edge and whether or not he's facing the edge.

The only difference in Tails' graphics is an added shine to his spinning sprite.

Buzzer's sprite was touched up a bit between the Simon Wai and August 21st builds: Its head was redesigned to be less ant-like, more detail was added to the abdomen, and the jets were straightened out.

Crawl's early sprite (0xA9580 in the ROM) is very different from its final design, lacking any kind of walking animation and only able to put its shield up in one direction.

All three signposts were originally symmetrical. Only Robotnik's remained that way.

At 0xA3C16 is a sprite of what looks like the breakable blocks from Sonic 1. It's so generic that it could have been for any stage, but it's most similar to the Hill Top bricks. These were unused from Sonic 1.

At 0xA4368 is a graphic for a fireball. The Hill Top boss in the final game can shoot out fireballs, but those fireballs grow and shrink in size and have three frames of animation. The older sprite would probably be animated like the fireballs in Sonic 1's Marble Zone:

The BBat badnik uses palette 01, but it looks a bit odd. If it's set to use palette 00 (Sonic and Tails' palette), the ear and flame colors look a lot better. This wasn't fixed in any build of the game before its art and coding were removed from the ROM entirely.

This badnik appears in Oil Ocean Zone in the final game, though its behavior is slightly different here:

A triceratops-type badnik that appeared in a mockup screenshot of Hidden Palace Zone. It slowly moves back and forth, and when Sonic approaches it, it activates its thrusters and charges at Sonic like the snail badnik. It is placeable in Hidden Palace through Debug Mode, but its graphics are garbled without using a PAR code.(01C1D8:0007)

A crocodile-type badnik, first seen in a mockup screenshot of a scrapped desert Zone, though it's unclear whether this enemy was intended to appear there. It slowly moves back and forth, opening its jaws if it's facing Sonic and is within 64 pixels of him. It is placeable with debug in Hidden Palace Zone, but its graphics are garbled without using a PAR code.

The seahorse badnik from Oil Ocean Zone has two distinct variants, neither of which match how it behaves in the final game.

A piranha-type badnik. It will move 32×(lower four bytes of subtype) pixels to the right before leaping, then jump in a high arc. Exactly how it works depends on its initial and current Y positions:

It is placeable with debug in Hidden Palace Zone, but its graphics are garbled without using a PAR code.

This is the Sonic 1 lamppost with a very different design than the one seen in the final version of Sonic 2. It is placeable with Debug Mode in Emerald Hill Zone and Hill Top Zone. They appear in Green Hill Zone, but the graphics are garbled.

00: Static monitor. Does nothing when broken. In the final game (where it's also unused), this damages the player.

03: Robotnik monitor. Also does nothing in the proto and damages the player in the final, but this one is used in the final's 2-Player mode.

08: Mystery monitor. Does nothing when broken...in this build. In the Simon Wai prototype, it activates Super Sonic's palette, with the rest of the attributes later being activated in the August 21st and Pre-Beta prototypes, before being replaced with the Teleport monitor in later builds.

09: Spring monitor. Only present in this prototype and the Simon Wai build, but it does nothing when broken. Two guesses on how this would have worked:

Chemical Plant Zone Platforms
The code in this version seems to be reused from object 52 in Sonic 1, which was used for the moving blocks in Marble, Labyrinth, and Scrap Brain Zones. Subtypes 02-03 (Marble Zone block that moves right when stepped on, then drops when it hits a solid tile), 04-07 (hidden block in Labyrinth Zone Act 1 activated by switch that leads to the quicker route), and 09-0A (sliding platforms in Scrap Brain Zone) are all unused in this build.

00: Chemical Plant Zone boss. The code was completely removed and the pointers to it are set to 0. Leftover symbol data call the subobjects "bossvac" and "vacumeguy". Its graphics do remain in the ROM, alongside leftover entries for loading them. However, the code was rediscovered in the August prototype, and can be ported over to the Nick Arcade prototype. With just some small object ID and pointer fixes and restoration of those graphics load entries, it'll work just about right out of the box, as shown in the above video.

The behavior is different to the final, generally having slower movement.

A humongous object list can be found inside the ROM, along with some raw source code.

Something interesting to notice is this group of code:

These lines of code are in the block that makes up Hidden Palace Zone's debug list from an earlier build. The content in the list appears to be identical to the actual compiled version in the ROM; however, it does give us information on the objects in the Zone that may have been previously unknown:

These same lines are duplicated in the debug list for Emerald Hill, but unused because the game is told that Emerald Hill's debug list will have 18 entries, and the Hidden Palace enemies are all after entry number 18.

This chunk of uncompiled code also indicates that the Zone order present in this build was going to be changed even at this early stage. Emerald Hill's debug list is labeled as Zone 00, which is Green Hill in this build but Emerald Hill in later builds. Similarly, Hidden Palace is labeled as Zone 08, which is where it resides in later builds and the final.

The second set of editXtbl labels seems to correspond with the debug lists of Sonic 1, but doesn't exactly match any extant build. Notably, the edit2tbl and edit6tbl lists have entries prefixed by asterisks, which don't seem to appear in the final game. The asterisked entries in edit7tbl exist in Sonic 1 REV00 only.

Inside the ROM, mixed in with the symbol tables and debug mode source code is what appears to be leftover RAM contents from the assembler that includes additional symbols, and also assembled code. What should be noted is that the data is from a previous build, and some objects do indeed have different code.

Differences include different positioning, a lack of hitbox for the drill, and a weird bobbing movement for the ship's body. The wheels also do not detect floor collision until they fall off the body.

Retrieved from "https://tcrf.net/index.php?title=Proto:Sonic_the_Hedgehog_2_(Genesis)/Nick_Arcade_Prototype&oldid=1351903"
Categories:
Cleanup > To do
Cleanup > To investigate
Subpages