These five betas, labeled Beta 4 to Beta 8 in the Sega QA Archives, are internal testing builds spanning eight days that were created as the Sonic the Hedgehog 2 project was nearing completion. All six were released by drx as part of the colossal February 23, 2008 proto dump.

While nothing prior to Beta 4 was found in the archives, the eventual release of the September 14th prototype confirms that the CENSOR prototype is from the Beta 1-3 period. 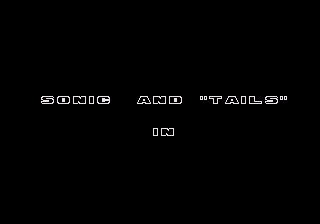 Beta 4 lacks "Sonic and "Tails" / Miles In" screen, and shows this version of the text in all Beta builds.

In all Beta builds, the demos play in this order: Chemical Plant, 2P Emerald Hill, Casino Night, Hill Top. They're still using the same inputs as the demos in the Nick Arcade prototype, with Casino Night using the inputs for the old Hidden Palace demo; clearly, recording new demos wasn't a high-priority assignment. 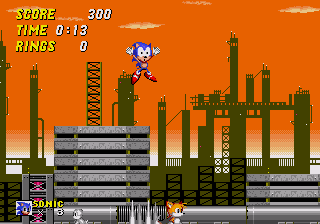 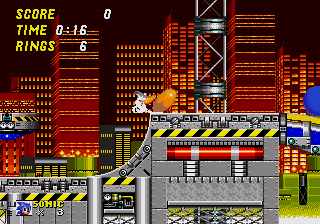 In Beta 4 to Beta 7, the amount of time the screen is locked after the player lets go of the Spin Dash is exactly 20 frames, regardless of how fast the player is going. 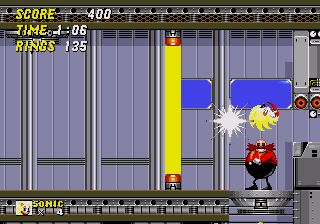 This can cause problems when the Spin Dash is revved up too much, especially when playing as Super Sonic: the player can outrun the camera and bypass most sprite-based obstacles, like the barriers in Wing Fortress Zone and Eggman's running sprite in Death Egg Zone. 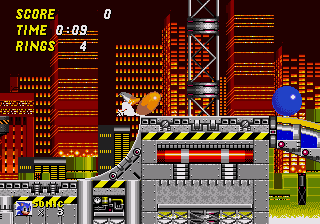 To fix this, the screen-lock time was changed. The game now takes the initial inertia after the Spin Dash into account, and freezes the screen between 20 (the slowest Spin Dash speed) to 12 (the fastest Super Sonic Spin Dash speed) frames. The player is now unable to outrun the camera after a Spin Dash. 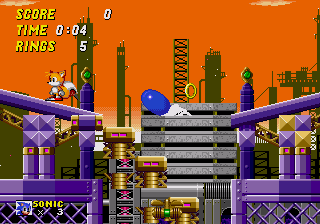 If the player is Spin Dashing on a platform that crumbles when the player steps on it (like the rectangular platforms in Aquatic Ruin and the ledges in Oil Ocean), they'll remain in the air until they stop holding Down. This wasn't fixed until REV00.

The Super Sonic transformation is in various stages of completion:

Super Sonic doesn't produce any invincibility sparkles when he runs.
The increased speed and acceleration are not enabled - this is set by the transformation sequence in later versions - but the player can get the increased speed/acceleration if they either get a Speed Shoes monitor and let it expire, or go into the water and then jump back out. 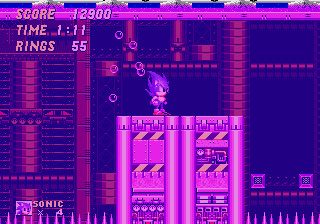 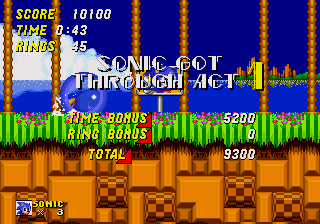 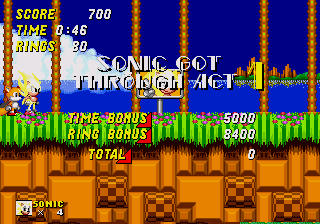 In all Beta versions, Sonic can keep his Super transformation at the end of the Act. The ring total on the results screen will be whatever rings the player had when they passed the signpost. 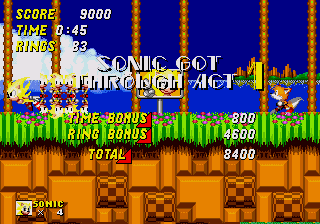 There's one problem with this: Super Sonic's invincibility stars are overwritten with font and continue icon graphics, leading to the mess you see here. The final version fixed this by transforming Sonic back to normal at the end of the Act, but ended up introducing a much worse bug.

The Act Clear screen has an additional period after the word "Act" but before the act number. The Total text is also higher up due to the lack of a Perfect Bonus. The period was removed in Beta 5, but the spacing (and the existence of the Perfect Bonus) wasn't changed until the final.

Beta 6 and Beta 7 use Sonic's continue icon for Tails. Beta 6 calls Tails "Sonic" at the end of the Act, while a new continue icon was drawn for Beta 8.

In Beta 4, the camera locks earlier than it should whenever an Animal Capsule is onscreen, causing the Capsule to be off-center. 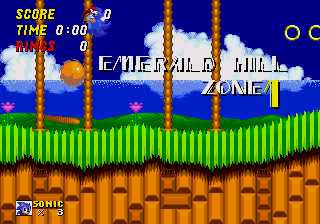 If the player holds any of the jump buttons as the Act starts, they'll start in the air after the title card scrolls off. Fixed in Beta 8. 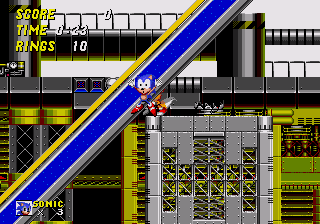 The collision check for getting crushed seems to be less lenient in Beta 4. The easiest place to see this change is in the lower path at the start of Chemical Plant Act 2, on the platform above the second transport tube with the Super Ring monitor. In Beta 4, if the player walks all the way to the left, they'll be crushed. In other versions, they're able to get to the end without dying.

The Stage Select screen in Beta 4 is about the same as it was in the Simon Wai prototype. Wood Zone and Genocide City Zone have been removed, Sky Chase Zone and Sky Fortress Zone have been added, and Death Egg Zone only has one Act. Wing Fortress is still called "Sky Fortress" on this screen after the August 21 proto, and even though Hidden Palace Zone is listed, it can't be selected. 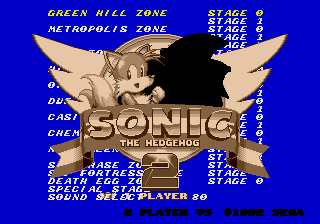 Betas 5 and 6 try to use the same setup, but the new title screen logo blocks out a lot of the text. 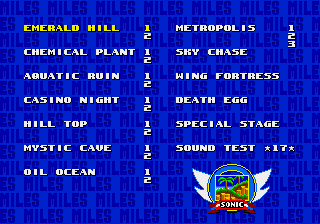 Beta 7 implements the final stage select. However, in this version, the player can't press Left or Right to go to the other column. That feature was implemented in Beta 8. 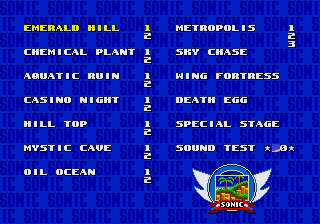 The sound test numbers in Beta 7 are initially glitched. Moving the cursor to the sound test option fixes that. 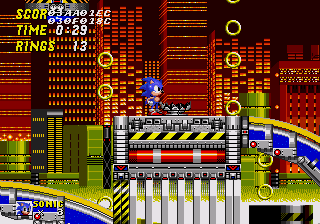 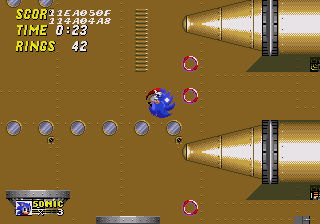 The "red ring" objects (the pinball mode toggles in Casino Night and palette changers in Wing Fortress) are visible in Betas 7 and 8 as long as debug mode is active. These are the only versions in which the player can see these objects.

Each Special Stage has a different layout to the final game - bombs don't even make an appearance until Stage 4. All of the stages were changed to their final layouts in Beta 5 except for Stage 6, which stuck around until Beta 8 before finally changing in REV00.

The ring values for Sonic / Tails alone also changed, but the changes weren't as drastic as Sonic & Tails together, only differing between 5-15 rings. Note that these changes made Special Stage 4's ring requirements harsher when playing solo than when playing as a team. The stages have different palettes to the ones used in the final, though the palettes for Stages 1, 3, and 5 were eventually reused for Stages 2, 5, and 7 respectively. These palettes are also present in Beta 5, but the stages use their final palettes from Beta 6 onwards.

In Beta 4 and Beta 5, rings sometimes disappear when the half-pipe is doing the transition animation from straight to curved. Once the tube has finished curving, the rings will reappear. This seems to have been fixed in Beta 6. The "X RINGS TO GO!" message doesn't appear until Beta 6. 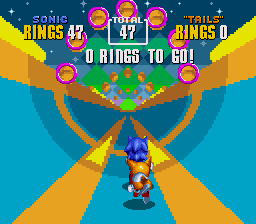 In Betas 7 and 8, the message will keep flashing even after the player gets enough rings. The yellow parts of the stage flash different colors occasionally in this version including green, red, and white. This is due to the cycling palette used for the rings that mark the end of each section being loaded too early. In Beta 4, the background doesn't flash different colors when obtaining the 7th Chaos Emerald.

The color order of the Special Stages the Emeralds represent are different compared to other versions. In Beta 4, the order they're collected is represented in the table below (with color positions kept in the final in bolded text):

Beta 4 only displays one Chaos Emerald on the screen no matter how many Emeralds the player has. In Beta 4 and Beta 5, the results screen uses the name "Tails" regardless of the console region, and the Emeralds are positioned higher. Beta 6 attempts to add the red triangles seen from the normal results screen to the Special Stage results, but something went wrong and the graphics are badly corrupted. This affects the small font and the Emerald graphics. This was fixed in Beta 7.

Beta 4 and Beta 5 don't acknowledge that the player has collected all of the Chaos Emeralds. Beta 6 adds the "All Emeralds" message but swaps around words a few. Fixed in Beta 7. By Beta 6, the letter E in Emerald was also kerned to the letter M. 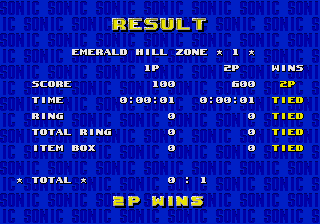 There's an oversight in Beta 4 and Beta 5: If either player gets a Time Over, the stage will reset and then immediately go to the results screen. This sets their score, time, ring, total ring, and item box numbers to what they were the last time they hit a checkpoint; or, if they never hit a checkpoint, to zero. Beta 6 fixes this by jumping to the results screen after a Time Over. Beta 6 is the first version to implement a 60-second timer after one player gets to the end of the Act.

Tails is always called "Miles" in Beta 4 and Beta 5. It changes appropriately from Beta 6 onward. 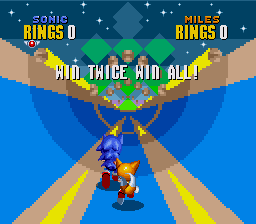 In Beta 4, after the first round of a Special Stage, the "MOST RINGS WINS!" message was originally written as "WIN TWICE WIN ALL!" This message was revised in Beta 5.

The palettes for Special Stages in 2P VS are also different to the ones in the final game.

Beta 4 has no ending at all. After the Death Egg cutscene plays, the game resets to the Sega logo. 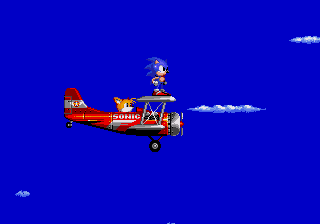 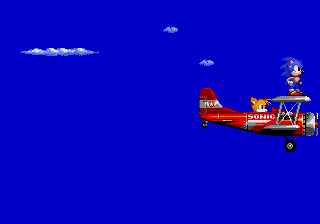 In Beta 5, a rough version of the final cutscene has been implemented: Sonic falls briefly before Tails catches him. Tails flies straight from the right - there's no attempt to make it seem like he's moving the plane up to catch Sonic. After 64 frames, Tails flies off to the right, off the screen. After about three seconds, the cutscene ends and the game resets to the Sega logo. There is no special ending for Super Sonic. 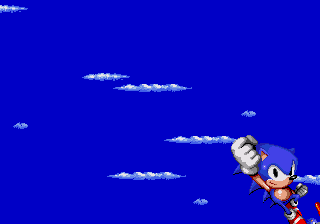 In Beta 6, the cutscene is close to what it would be in the final version, but the part where Sonic jumps off the plane is glitched. The large Tornado and large Sonic sprite both spawn in the bottom-right corner. There's no special ending for Super Sonic, and finishing the game with Tails plays Sonic's ending. 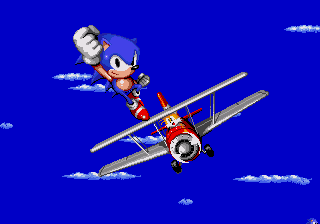 Beta 7 spawns Sonic at the right place, but forgets to delete the tiny Sonic & Tails sprite at the bottom-right corner. This was fixed in Beta 8. Beta 7 is also the first version to implement a special ending for Super Sonic; it's identical to the one in the final version. Tails is still missing his ending cutscene. 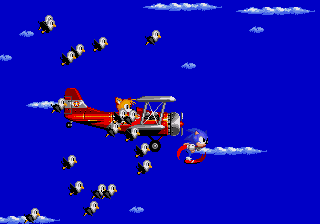 Something in Beta 8 glitched the Super Sonic ending up: Sonic starts out Super, but after a second he transforms back into regular Sonic, running on air. 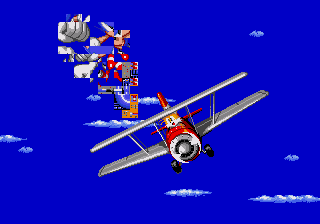 The game loads the large Super Sonic sprite at the start of the ending, but tries to give it the normal Sonic tilemap once he transforms back, resulting in this glitched mess. 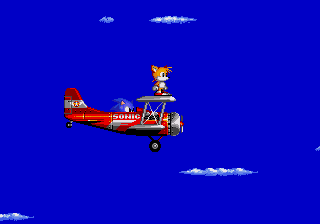 Beta 8 is the first version to implement an ending for Tails. It's almost there, except for the part where Tails' tails sprite is missing. 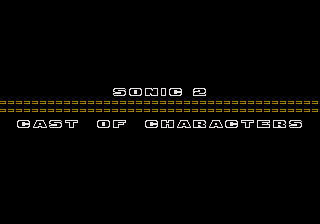 In Beta 6, there's an odd segmented line in the middle of the screen. This was removed in Beta 7. 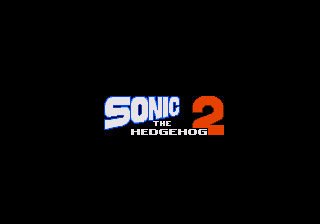 A Sonic 2 logo was added at the end of the credits in the final version. The credits had to be sped up a bit to fit this screen.

From the Simon Wai prototype up to Beta 7, the main part of the invincibility effect is two sets of large sparkles that go into one of three different positions every nine frames. Beta 8 uses a more complicated effect: A circle of rapidly moving invincibility sparkles that cycle every 48 frames.

The sub-effect of the invincibility effect, in earlier versions, is a collection of small invincibility sparkles that trail the player and change direction depending on what direction the player is heading... in theory. This was working fine in the Simon Wai prototype, but after that something in the code glitched. 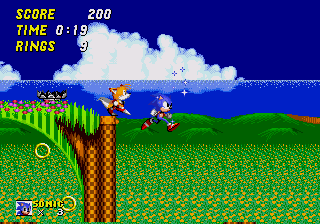 Stego's sprites were the same as they were in the August 21, 1992, September 14, 1992, and CENSOR builds. They were later deleted by the time of Beta 5. The updated sprites weren't widely known about for a while, so most proper implementations of the badnik, both unofficial and official, only used the Nick Arcade sprites back then.