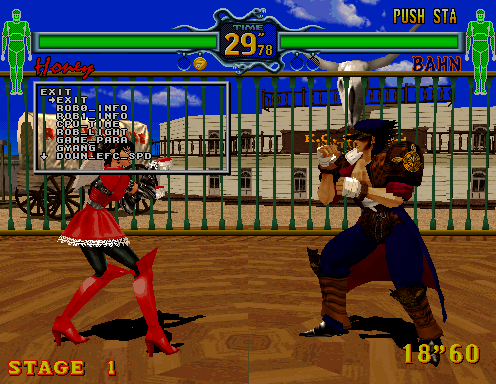 Fighting Vipers' debug menu can be accessed in a similar way to Virtua Fighter 2's and in the exact same way as Sonic Championship's.

This script created by Link and BiggestSonicFan can be used with the Nebula Emulator, and simplifies the button code to holding the Service Switch and pressing Button 1 simultaneously , after which Button 3 and Start on the 2P controls will start Debug Mode as normal.

A very well-known piece of trivia: Sonic and Tails are both hidden in the game. As the story goes, a programmer added Sonic and Tails to Fighting Vipers in his spare time. While intended as a joke, Yu Suzuki showed the result to Hiroshi Kataoka, who then showed it to Yuji Naka, who in turn loved the idea and approved of it being developed further - the result being Sonic the Fighters.

Sonic and Tails share a character slot, with Tails considered to be Sonic's 2P color. Both have a unique nameplate (unsurprising given that the 1P and 2P color nameplates for all characters are stored as separate graphics), but only Sonic's is used in-game. The duo also share a single bio, though it's mostly blank.

Somewhat less well-known is that a couple of the staff members responsible for making Fighting Vipers are in the game too!

Character DUM3 (Sonic is DUM2) is Daichi Katagiri, listed as Game Co-Ordinator in the credits; he also has a proper, unique bio for the Character Select screen. Character DUM4 appears to be Hiroshi Kataoka, the game's director.

They're fairly glitchy, particularly in that the head models seem to get swapped out a lot - during his victory animation, Kataoka's head suddenly changes to Katagiri's. The Nebula emulator also makes them look reflective, though this may be an emulation issue (evidenced further by the fact that they outright don't appear if hacked into older versions of the emulator). They also have slots for alternate costumes, but having a mirror matchup seems to glitch their graphics even further. Unlike the rest of the characters, the character models of these characters uses a simpler texture mapping and basic models akin to the characters in Virtua Cop, another Sega AM2 game.

Unlike Sonic and Tails, the Sega employees will crash the game upon the start of a match, as they seemingly lack intro animations. As such, the only way to load them into a fight is by using the Debug Menu during a match or memory editing.

As with Virtua Fighter 2 and Sonic Championship, Fighting Vipers' debug menu includes a Polygon Test for checking every single polygon object in the game. Some notable examples are included below.

A yellow, donut-shaped object that doesn't appear to be used by any fighter or stage in the game. This could be intended to be a ring from the Sonic the Hedgehog series, as it's relatively close to the models for Sonic and Tails in the Polygon Test and in Sonic Championship, fighters drop rings in true Sonic fashion whenever they are attacked; perhaps the programmer responsible for Sonic and Tails in Vipers toyed with that here? 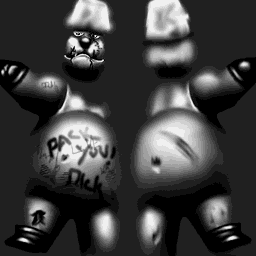 While technically not unused, in Old Armstone Town stages, Kumachan's face and stomach tattoo reading "ALL THE SINNERS SAINTS" are actually laid over this texture, which appears to be an early draft for Kumachan's design. He's dramatically more gruesome-looking here, and his chest appears to say something along the lines of "FACK YOU! DICK", which is just lovely.

In the USA and Export versions of the game, Honey is instead named Candy. The Western version also gives her weight, whereas the Japanese version just says "Secret". On a general note, the US/Export versions give measurements using the imperial system.

In Japan, advertising for Pepsi Cola was present throughout the game.

In the game's second attract mode, Tokio is seen with a can of Pepsi. It's missing in the USA/Export version.

Likewise, all of the Pepsi branding was removed from Picky's Diner stage, and replaced with more generic advertising.

Picky himself also got caught in the changes; in Japan, he has the Pepsi logo on his 1P Color's skateboard. It's changed to a "HYPER VIPER" logo for other regions.

Pepsiman is not present in the Arcade version; he was only added for the Saturn port.