This page details prerelease information and/or media for Splatoon.

Splatoon was planned as early as 2012, which was one of the team's seventy video game ideas they thought up of in the span of six months after the Wii U's launch. They had trouble deciding on what the setting and aesthetics would be like, where their playable characters originally started out as tofu blocks, to rabbits, and eventually humanoid squid characters which would be Inklings.

It became a surprisingly big hit when it was launched, especially in Japan and formed a new competitive scene for the game. It also set Nintendo a new standard on the shooter genre; something that had not been done for decades since Yoshi's Safari!

Splatoon was shown off for the very first time at E3 2014. While the foundation for the game was settled down, it was only "10% complete". It was very well received by the crowd even though it was still in development.

Urchin Underpass This was the only playable map in the demo.

It had some unfinished areas of the map blocked off by oil pumps, there is a placeholder striped floor in the blocked off sections when the map is shown from above in the results screen. The map was also unpolished, with the glass floors being completely not opaque. There was also slight changes - some platforms were only reachable by going up steep ramps etc.

At E3 2014, various people could try out the demo of the video game.

https://www.youtube.com/watch?v=9EXKQQmm9EE The game was shown off again, this time at the Nintendo Direct. Two new stages, which were the Blackbelly Skatepark and Camp Triggerfish were shown off along with the Octo Valley campaign. 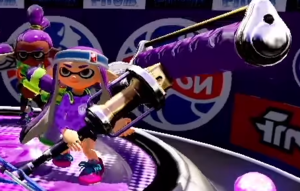 The video to the right showcases a few of the changes from the April Trailer.