This page details prerelease information and/or media for Super Mario RPG: Legend of the Seven Stars. 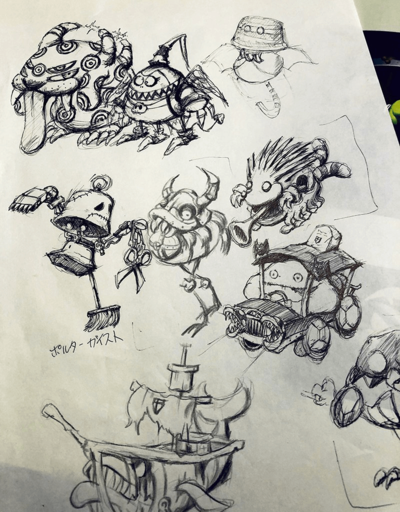 A handful of conceptual enemy sketches realized by Kazuyuki Kurashima, the game's monster designer and character supervisor. This sheet includes quite the handful of scrapped enemies, some rather odd, with only Belome and Punchinello making the final cut. 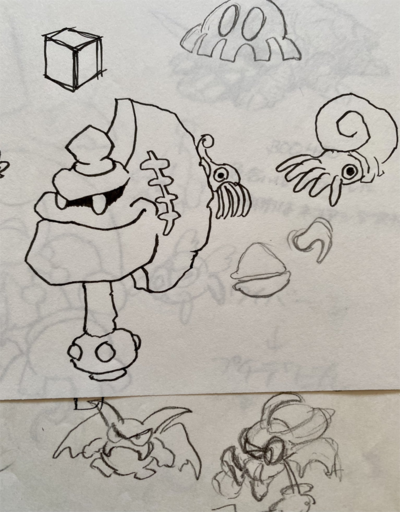 Additional early enemy concept art was later showcased by Kurashima on his Twitter. While undated, it looks quite a fair bit rougher than the ones that followed.

Interestingly, extra sketches can also be seen bleeding through this page: 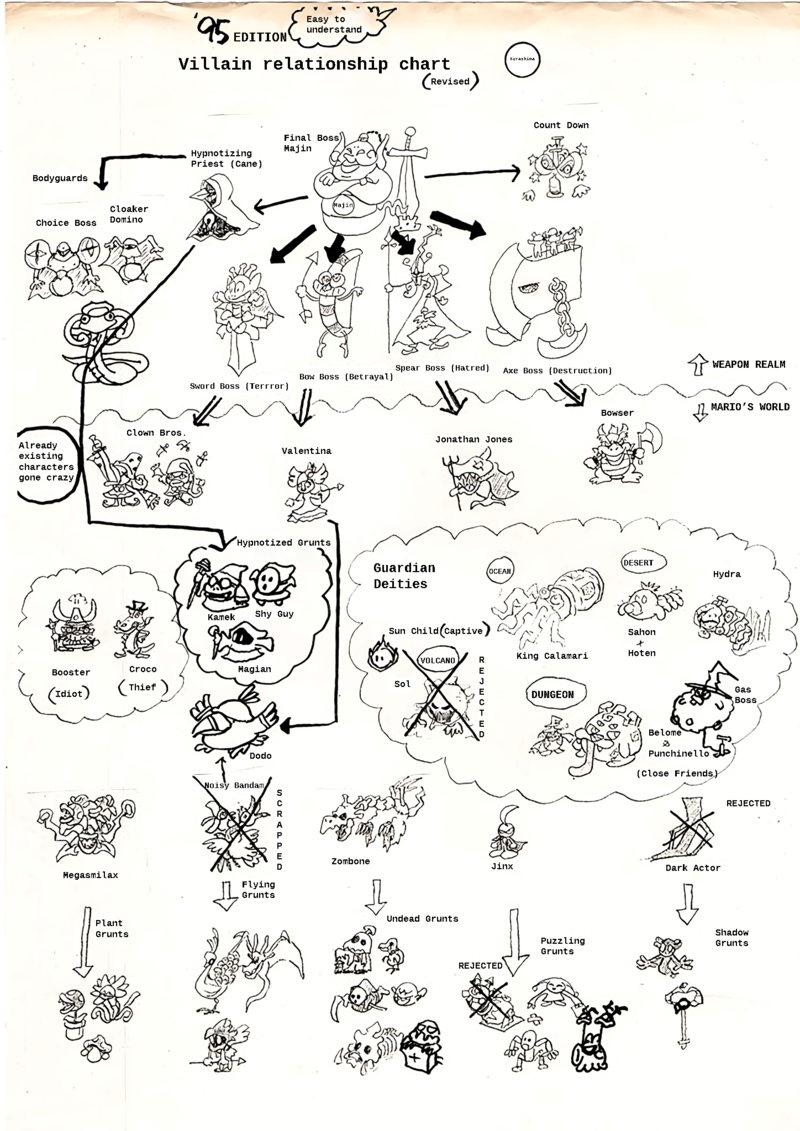 Dated 1995 is this conceptual chart made by Kurashima. This chart aims at giving a clear look at the relationship between the game's various antagonists, which is formatted as a hierarchy of sorts. Various elements were ultimately changed, repurposed, or scrapped entirely for the final game.

The top half of the chart is dedicated to the main bosses that are part of Smithy's Gang and originate from the weapon dimension. Almost all of them use placeholder descriptive titles rather than names, meaning that while already conceived, work still had to be done on them. Interestingly, the Clerk, Manager, Director, Gunyolk, and the Factory Chief are missing entirely. This is likely due to the Factory not being a thing yet at this point in development, with it perhaps being introduced with Smithy's later design revision making him a blacksmith. Boomer is also missing, suggesting a later inclusion.

The characters in this section are as follows:

The bosses and enemies encountered in the Mushroom Kingdom, this section taking up much of the chart. First and foremost, worth noting is the relation between the four bosses listed here and the four members of Smithy's Gang. This relation was likely just a question of worldly parallels, as in the final game aside from Yaridovich and Jonathan Jones no pairs ever interact with one another (and even then these two are rivals). Moreover, it wouldn't make a whole lot of sense for Bowser and Blade to be linked for example. The characters in this section are as follows:

Interestingly, there exists a section which lists "Guardian Deities", or quite literally bosses which would reside in a given place, and were not associated with Smithy's Gang. The characters in this section are as follows:

The remainder of this chart is comprised of secondary bosses, which are shown as overseeing groups/types of enemies, giving us an interesting look at the game's early design process. Characters like the Hammer Bros, Bundt and Chef Torte, or Birdo being missing is likely due to them only being created due to story rewrites.

The characters in this section are as follows:

Yet some more concept art showcased by Kurashima. It appears to be from a more recognizable stage of development, though some interesting differences still remain. 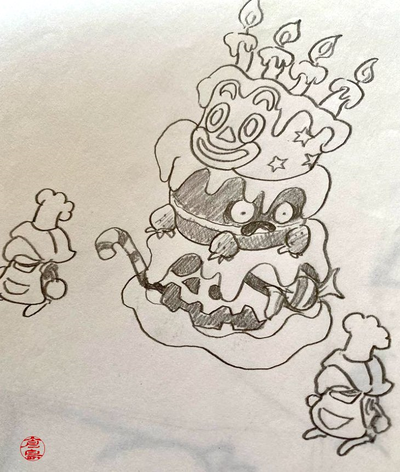 Conceptual artwork of Bundt, Chef Torte and his apprentice. Here, Bundt is shown with only four candles, as opposed to the final game's five. 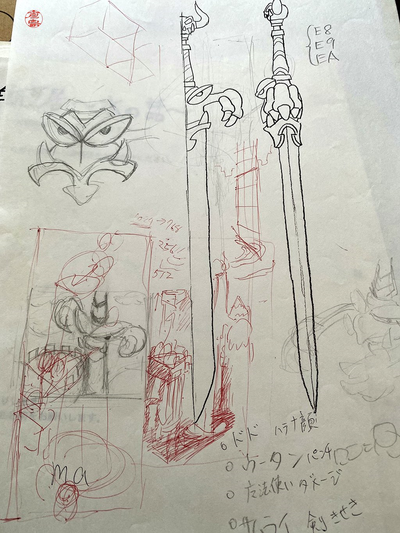 A concept page of Exor, complete with a model sheet and a sketch of his battle arena. Worth noting in the lower right corner is an alternate battle pose for Exor, with his hands reaching outward. Meanwhile, in the final game his crossguard hands never move, and neither are they used as a means of attack. This idea was likely dropped due to making the battle too complicated, as the played would have had to balance fighting Exor's two hands, both of his eyes, his mouth, and his hilt. 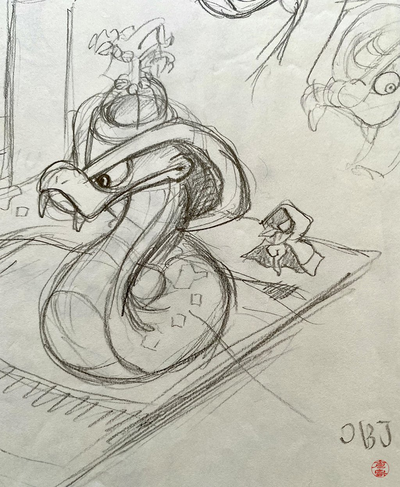 A pretty standard piece of concept are depicting Mad Adder and its arena, as well as a now finalized Domino. What isn't standard, however, is the presence of the cut "Hypnotizing Priest" character, revealing that he managed to stick around for longer than originally thought. Given the fact he sits in the back of the arena, it's likely he would have offered buffs to Domino and Mad Adder, or perhaps even tried to attack the player and their team. 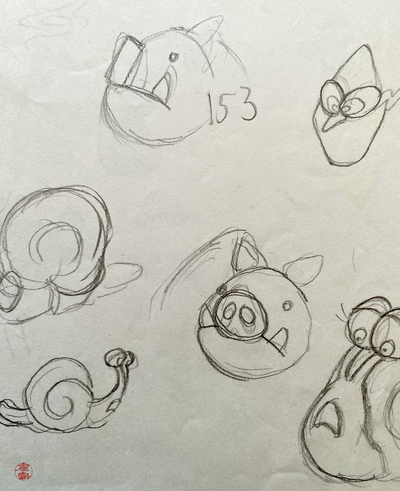 A small handful of cut enemy concept sketches, including a stern boar/pig head, and a giant distressed snail. Also shown here is a head doodle, which vaguely looks like Bowyer.

A known total of four separate concept art sketches were drawn up for Geno. Interestingly, all of the designs feature Geno with a sword. The final game instead opts for finger guns as his main weapon and an elbow cannon as his alternate one.

We can see use of the third-listed concept art design in a short looped test sprite animation for Geno, revealed by the game's character designer, Kazuyuki Kurashima. 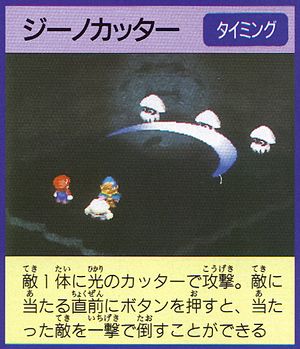 The graphics for Geno's Geno Whirl (Geno Cutter in Japan) move once had a blue crescent design, instead of the yellow/orange saw shape of the final.

Retrieved from "https://tcrf.net/index.php?title=Prerelease:Super_Mario_RPG:_Legend_of_the_Seven_Stars&oldid=1190330"
Categories:
Cleanup > To do
Cleanup > Works In Progress
Games > Games by content > Prereleases