This page details prerelease information and/or media for Ufouria: The Saga.

A US version was planned for late 1992 but cancelled due to its quirky design (which is also the reason the US release of Mr. Gimmick was scrapped, although a US prototype for that game was dumped, unlike Ufouria). A US Prototype was also found for Ufouria and it was dumped on March 23, 2021. The screenshots in the ads show slight differences from the European version. 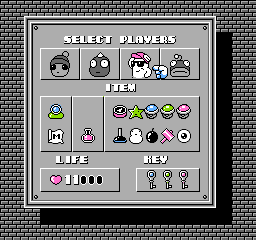 In the item subscreen, you can see the star that was used in the pre-release screenshots.

The stars while Shades is charging up was replaced with hearts. Interestingly, the star graphics are used for an item in the final game. The screenshot also shows numerous layout changes. 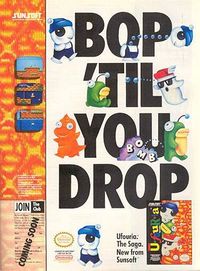 An early advertisement for Ufouria. You can see Bop Louie's head bops straight.

An obvious change here is with the HUD. The early version shows several copies of the current character's head above two counters of indeterminate function, whereas the final version features a life meter and crystal counter. Besides the fact the map has gone through some changes, another minor change is that in the final, Bop Louie's bop attack comes at an angle, while in an earlier version it went straight.

The area went through some obvious layout changes including removing an enemy and some rope obstacle.

This pre-release shot contains the words "LICENSED BY NINTENDO OF AMERICA, INC." hinting an American release was planned.