Ufouria is a platformer which features four characters with different abilities, all traversing an open, non-linear world. Sadly, the game seems to have had a rather rough development process, given the sheer amount of unused assets and strange data found within the ROM.

The game was not seen in America until 2010, when it was made available on the Wii's Virtual Console service.

While it doesn't affect the game's music to a large extent, there are very unusual quirks in how Ufouria handles its sound.

Due to a programming error, the triangle channel of the title screen music is silent after a hard or soft reset. It can still be heard by returning to the title screen from within the game (e.g. by getting a game over, or entering and exiting the password screen).

It should be noted that most OST releases of the game's soundtrack mistakenly use the missing-triangle version. As of this writing, only the recording found on Takusan Hebereke (DPCX-5039) appears to use the correct version.

In what appears to be a widespread issue across some games (including Double Dribble, Mr. Gimmick, and Klax) that use the NES sound chip's sample capabilities, Ufouria's DPCM samples are corrupted, causing the drum and bass samples to have a hissy overtone.

An explanation can be found in the aforementioned Double Dribble page. 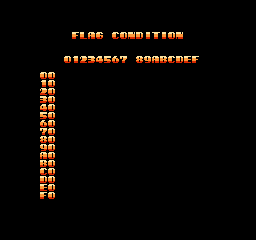 Tilemaps for the flag editor in the "Forple" prototype exist in the final game. The three packed tilemaps at 0xC249 exist in both ROMs albeit unused. The font must be loaded into the non-animated background CHR area in order for the strings to display properly. The pointer table indexes for the tilemaps are 0, 1, and 2, respectively.

Both versions of the game contain numerous unused graphics, some of which appear to be from much earlier in the game's development. It seems that the game underwent some rather drastic changes, possibly due to either tight deadlines or limited ROM space.

Many of these graphics also reveal that Ufouria and Hebereke were in development at the same time, and that Ufouria may in fact predate Hebereke.

Several frames of the UFO boss zooming in from the background. As this is stored with the title screen graphics, and the title screen loads several appropriate palettes, it's safe to assume this was meant to be shown there.

Found Only In Ufouria

Numerous unused animations for Bop-Louie, including what may be a couple of idle animations. Note that these are all blank in Hebereke!

Same as above, but for Freeon-Leeon. Who knew he was a talented singer?

More animations, this time for Shades/Sukezaemon. Apparently he enjoys a nice cup of tea.

Unused animations for Gil/Jennifer. Note that he appears to have actual swimming frames here, whereas in the final game he just sort of...walks underwater. He's also the only character to not have some kind of "blowing steam" animation.

A single frame of O-Chan posing for the camera. (Yes, this also appears in Ufouria.)

Graphics that depict an unknown cat character (possibly an early O-Chan?) and early Bop-Louie being...hanged? It's worth noting that the hanged cat graphics are in the same CHR bank as (and line up perfectly with) the large bird that carries you across gaps midway through the game, so the two were likely connected at some point. The hanged Bop-Louie is also stored in a nearby bank, and may be part of the same scenario.

Animations for a cat boss, which could use some kind of bubble attack. This was very likely a scrapped second form of the armored knight boss, as it appears in an adjacent CHR bank. In the final game, the knight's second form is completely defenseless and doesn't even move.

Interestingly, this cat boss seems to resemble the unknown cat character seen above!

Some sort of rock-throwing penguin dude with shades. Was this to be an enemy, or a playable character?

A ninja enemy that would hurl shuriken at you from the ceiling.

A whole set of animation frames for the little minion dude that the final boss swings around, showing that he was once more than a mere puppet. Apparently they were killable, too, judging by the presence of a life crystal sprite in the same CHR bank.

Either an earlier design for Popoons (the little faces that stomped enemies turn into), or just another enemy. Looks like it could have rolled around.

An unused frame for this blobby obstacle shows it being hit/pushed from the side. It's possible that it once served as a much tougher roadblock than it does in the final game, where it can be defeated with just a couple of jumps. For some reason, the top-right corner of the graphic is missing in Hebereke.

A drooling block, similar to the one in the very first area of the game, but with "awake" and "asleep" states. It's possible that at one point, waking one of these blocks would have provided a shortcut to an earlier area of the game.

An older version of the springboard sprite, before it was reshaded and mirrored to save CHR space. (Final springboard on the right for comparison.)

Graphics for a cut world map legend exist in the final game, albeit unused. It can be seen used in the US prototype.

The title screen is completely different between releases.

The two first player characters are different between regions. In Hebereke, you control a penguin named Hebe and a girl in a cat outfit named O-Chan. Meanwhile, Ufouria puts you in the shoes of the bug-eyed snowman(?) Bop-Louie and the lizard Freeon-Leon. The two remaining characters were left unchanged, but were renamed from Suzekamon and Jennifer to Shades and Gil, respectively.

Ufouria seems to be based on an earlier build of Hebereke, as evidenced by the unused Bop-Louie sprites found in every version and the Freeon-Leon sprites being present alongside O-Chan in one of Sunsoft's development disks. Bop-Louie is less anti-aliased than Hebe while Freeon-Leon is barely anti-aliased at all.

The character portraits in the dialogue were changed. Interestingly, the unchanged characters suffered from this change too, as they look anti-aliased and less round in Hebereke.

The character icons in the sub-menu were changed to match the overworld sprites.

The crows attack by dropping poop onto the unsuspecting player in Hebereke. This was changed to a 16-ton weight in Ufouria.

The Game Over screen in Ufouria is rather bland, whereas in Hebereke, it uses ornate lettering, similar to the "The End" lettering used in the game's ending.

For some strange reason, the tilemap data from Ufouria is present in both versions' CHR ROM, appearing as scrambled tiles in a tile editor.

The ending is slightly different between both releases. After the staff credits in Hebereke, waiting on the Sunsoft logo for a long enough time earns you a bonus message from Hebe, complete with a "The End" graphic afterward.

In Ufouria, this scene is directly after the epilogue between Bop-Louie and friends and right before the credits, so the game ends on the Sunsoft logo instead.