There was an early font present in the European version. One notable difference is that the final font is anti-aliased and removes the shadow.

Present in the Japanese version (due to the different Sunsoft logo), the mascot from some earlier Sunsoft commercials was supposed to appear but was left unused in the final game. A few leftover graphic pieces for this mascot was later added (but still unused) in Hebereke no Oishii Puzzle wa Irimasenka.

This is what it will look like when the graphic pieces are put together.

These strange sprites of Muu-Neko are present in the game's data, likely meant for battles.

(Sound Test ID: 0D)
As the title suggests, it was originally meant to be played when fighting against Unyohn. The final game plays "Here's Sukezaemon!" instead, thus making it unused outside of the sound test. The name was taken from Takusan Hebereke (the game's official soundtrack).

(Sound Test ID: 10)
Hebe is... speaking. A remastered version named "Hebe to Oh-Chan No Rusuden" was made available on Takusan Hebereke (the game's official soundtrack), this version of the track is higher-quality as well as including Oh-Chan speaking at the end. It seems like this track was used to fill up cartridge space, as this track is not only long but is also the last track in the game's sound test.

Hebereke's Popoon was localized for European territories sometime around 1994, but it didn't use the character designs from Ufouria: The Saga and didn't use the extra scanlines.

The Sunsoft logo was changed between regions. While the Japanese version got a pink gradient and a much shinier font, the European version has a blue gradient and the font... not so shiny.

The Hebereke logo was brightened differently, "LICENSED BY NINTENDO" was added, "PUSH START" was changed to "PRESS START" in a much thinner font and in a different position, the Sunsoft logo in the copyright text was recolored, and an extra Hebereke logo (in English) was added.

The controller was removed and the letters for the buttons were recolored.

The icon removed the controller, changed Hebe's pose and added six stars around him.

The music and sound ID could go up to FF in the Japanese version, which the localization changed it to 10 and 44, respectively.

The Japanese version had 2 unique dialogs that were replaced by duplicates of the same dialog in the European version. 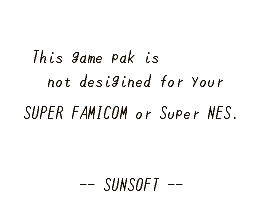 If the European version detects it is being played on an American/Japanese console, this error pops up. "Designed" is misspelled as "desigined".