Unyohn was originally meant to appear on the map at one point in development.

"LICENSED BY NINTENDO" was added in the European version, the Sunsoft logo was changed a bit, "PUSH START BUTTON" was renamed to "PRESS START BUTTON" in a slightly different color, the color in ©1995 was changed from cyan to orange, an extra Hebereke logo (in English) was added, and the © was touched up a bit. However, a mistake was made and as a result, the color for the bushes was messed up. Other than that, it's pretty much identical to the original Japanese version. 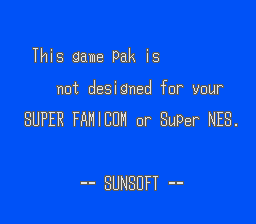 If the game detects a European/Australian cartridge is being inserted onto a Japanese/American console (or vice versa), this screen pops up.

If the game detects it is an illegal copy, after playing the game in a while, the game resets.