Primal Rage is a strange one-on-one fighting game where a bunch of prehistoric animals fight each other on a post-apocalyptic Earth. Techniques include farts as special moves and urinating as a finisher. 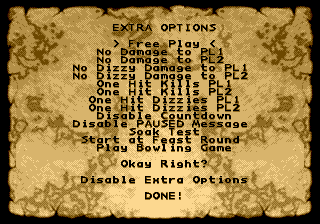 While many of the options are self-explanatory, a few of them aren't: 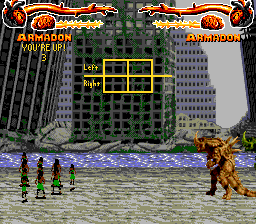 As noted above, there is an option to start regular matches with a bowling minigame: The fighters will walk offscreen and a bunch of humans will run up, serving as the pins. The player(s) or COM can use the controller to line up their shots, which consists of the respective fighter rolling into the "pins".

After the minigame ends (which consists of only two frames), the match returns to normal.

For the Sega Channel, three special versions of the game were made. The ROM files were found on a Sega Channel development disc. 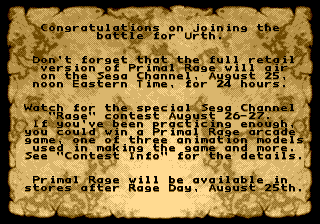 This version was available on the game's launch day, "Rage Day". It was claimed that this was the full retail version, but it does contain a few omissions - namely the "Okay Right?" option and the bowling minigame from the extra options menu.

The internal ROM header is copied from Mortal Kombat. 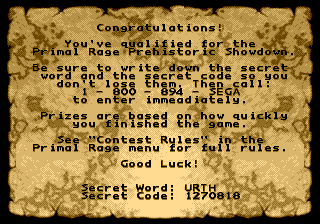 A one-day contest held on August 26, 1995 from Noon to Midnight, Eastern time. The first 154 winners could win a variety of prizes, the grand prize being a full Primal Rage arcade cabinet.

Players were tasked with completing the single-player campaign as either Sauron or Blizzard. Upon completion, the screen to the right appears instructing players to call a phone number with the secret word and code shown. While the secret word is static, the secret code is generated based on... something.