From The Cutting Room Floor
< Proto:Antonball Deluxe
Jump to navigation Jump to search

This is a sub-page of Proto:Antonball Deluxe.

Punchball Antonball is the half-sequel to Antonball Classic, released on March 19th 2020. It copies the gameplay from Punchball Mario Bros, with 7 of the same levels copied and pasted. While the game itself is poorly made and can cause crashes when taking damage, it has a somewhat functional prototype of Antonball Deluxe within, as both game run under the same engine

rm_test is still in this build with some changes from the Deluxe Test Build. The camera no longer functions and the moles move and can kill you.

rm_test1 has had some updates, though the room no longer functions the way it was supposed to. A new background was added, a placeholder border was added, however, spawning in this room results in an automatic win, with a crash following.

fin shows a sprite of Anton in full. This room is non-functional and never shows the sprite in-game.

sprite21 is the first revision of the arcade border. The characters are in different places, the mole enemy has a different grin and is duplicated twice, Anton's arms and legs are more spread around and Annie is looking in a different direction. This can also be found in rm_test. 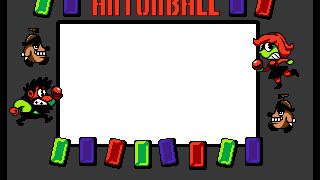 spr_border is the second revision of the arcade border. All of the character sprites are identical in the final, but with a brighter tint. This border also shows an arcade cabinet. 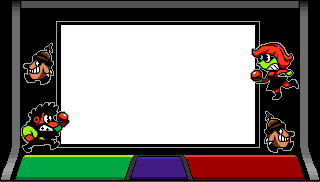 spr_border1 is the third revision of the arcade border. The tint is now darker, all the characters are in the same positions as in the final, and this border shares a few more unused sprites.

Objects exist for these sprites, showing that they would have moved along with the movement of Anton or Annie, but they're all unfinished and are never used in any rooms. A mockup can be seen below if all the sprites are layered correctly.

bg_sewerold is an early version of the sewer background, with missing water and a lighter tint.

bg_sewer is almost identical to the sewer background in the game, though it's smaller. Some very minor differences can be seen in the water.

bg_placeholdercity is a placeholder background of a city, similar to the December 6nd 2019 prototype, showing that the first levels would have been city based.

Although spr_mole_stunned is used in game and ment to be part of Punchball Antonball, only the first sprite of the mole being stunned is shown, and the other two frames are unused.

All of Anton's sprites from the January 30th 2020 prototype are here, with some new additions that are different from the final game. Interestingly, spr_anton_skid wasn't finished, so a skid sprite of Mario from Donkey Kong '94 was put in as placeholder instead.

For some reason, sprites related to Big Chungus are in the game's data.

Sprites from Classic Anton are in this build again, just left unused.

spr_antonlife is an earlier version of a life icon in the final game with the same name. The icon goes unused, however.

There's a group of sprites that are related to each other, called Red Switches and Blue Switches. This likely would have been a mechanic like Mario vs. Donkey Kong where color-based switches would reveal platforms based on the color switch that was pressed. No objects exist for these sprites, so all of this goes unused.

The game has a few sounds that made its way into the final release, with placeholders that the developer just forgot to remove.

mus_fire Probably a placeholder ment for the Punchball Antonball theme, as it's the Fireman theme from Game & Watch Gallery.