This page details one or more prototype versions of Chill Manor.

A "sampler" demo of Chill Manor was made sometime in mid-October 1996, in order to promote the game's upcoming release. It only contains Levels 1 and 12, and is based on a near-final (if not complete) version of the game.

The only level difference in the demo is in Level 12: six Rubies of Courage were added to the starting room to make the first fight easier. 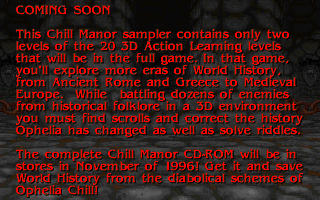 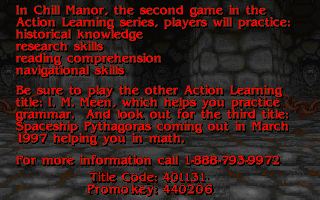 These two screens are displayed between the credits and the Simon & Schuster copyright screens. In addition to promoting the full version of Chill Manor, they also advertise I.M. Meen and the then-upcoming Math Invaders (under an earlier name, Spaceship Pythagoras). Both screens are dismissed by pressing a key.

Speaking of the Simon & Schuster screens, they also require a key press to disappear in the demo. The final game has them disappear automatically after a few seconds.

There is an unused, earlier version of the second advertisement screen in the RES folder, named COPYOF~1.LAB. In it, the title code and 888# VDN actually belong to Math Invaders, not Chill Manor. This was obviously corrected, but a few stray pixels from these early lines can still be seen in the final image.