The map of 1000 AD underwent several minor changes, and at least three major ones: 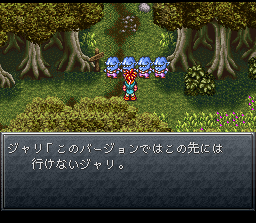 Fully functional and can be explored in its entirety, though the northern exit is blocked by a group of four Blue Imps who state "You can't pass this point in this version."

As mentioned above, the prototype Zenan Bridge is broken in 1000 AD, but more interestingly it's actually possible to enter it from the south, which grants a different view of the broken bridge not seen in the final.

Ultimately, this was probably deemed pointless, as it was still possible to reach Porre by ferry (which may well be why the ferry exists to begin with) and so it was patched up in the final. The tiles for the south/west broken bridge still exist in the final, but aren't used.

Identical in layout, though there are a few pre-opened chests here and there which were removed/closed in the final.

A few other oddities exist, however: 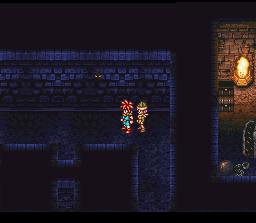 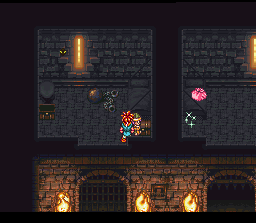 At two points, strange "eyes in the darkness" can be seen poking out from the walls. The first instance is in the hallway with the guards that can be knocked out from behind, while the second set can be found in the closed-off cell with two chests in it. This is the same sprite seen behind the gate in Bekkler's Tent in the final, with one distinct difference:

The eyes peer back and forth briefly before blinking, then disappearing, eventually reappearing and starting the whole cycle over again. In the final, all these strange eyes do is blink. 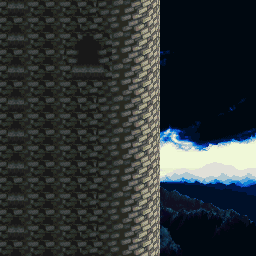 Also of interest, although inaccessible, mixed in with the maps is this tower exterior. It looks similar to one in the final, but is much smaller, and with the exception of a large window is completely devoid of detail.

Almost completely re-imagined for the final. For starters, the final uses a much brighter palette. However, the changes go far beyond that...

It should be noted that the cave is completely devoid of events by default: there are no monsters, and none of the holes work. They can be re-activated using the following Pro Action Replay codes:

The main hallway was made much more elaborate in the final. In the prototype, it's just a simple straightforward path with a small waterfall and stream. 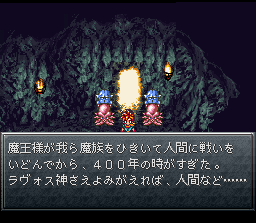 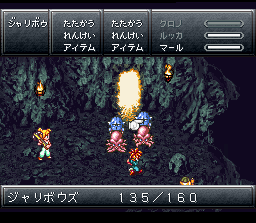 Immediately after entering, you're greeted by a pair of Octoriders, who deliver a message and then attack. These enemies were left unused in the final.

The dialogue translates to "The Great Demon King led us in the battle against the humans attacking us, four hundred years ago. When our God is reborn, the humans will not matter......" 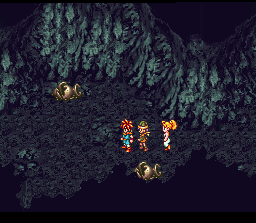 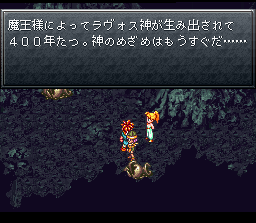 Further into the entry tunnel are a pair of broken Jinn Bottles, who also deliver a message (different from the Octoriders') before springing to life and attacking. These enemies, while present in the final, never actually appear broken, and the only monster dialogue spoken in the final is from the enemies at the very entrance.

This dialogue translates to "Four hundred years have passed since the Great Demon King brought about the birth of our God, Lavos. Our god's awakening is close at hand......"

The main area is where the true differences lie, being a large maze of currents and waterfalls at this point in development. The currents aren't powerful enough to hinder movement, but it's the waterfalls you need to watch out for, as once you've dropped down one you can't get back up it. The entrance is in the upper-left corner, while the exit is in the upper-right. This room is entirely devoid of monsters.

In the final, this area was greatly simplified: instead of bothering with waterfalls, it's a straightforward run through some raised cliffs with a few added battles in between. This room was also effectively broken into two parts, with a quick dash through the water from the cave on the left, to the one in the center coming a little later. 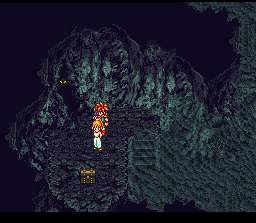 More of those creepy eyes can be seen lurking in one of the lower tunnels. These ones, unlike the ones in the prison, constantly peer left and right, do not blink, and do not vanish. It seems the developers wanted to use this sprite for atmosphere a lot more frequently than what ended up happening.

The sub-chambers of the cave weren't changed too much. The big difference is the lack of chests and the presence of several small holes which, if jumped into, all lead back to the waterfall in the entrance tunnel. These are necessary to escape, due to the presence of the one-way waterfalls in the main chamber. 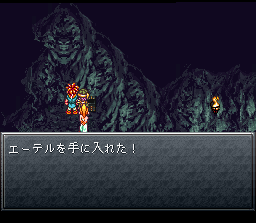 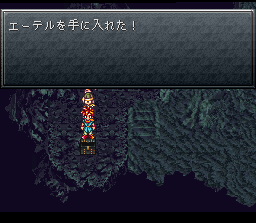 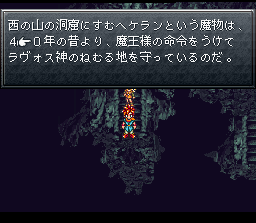 Other things of note include that the dungeon contains only two treasure chests (as none of the side-rooms with holes contain any; these are merely traps with monsters in them in the prototype), and that while the holes are functional the text displayed is incorrect despite the presence of a pointer.

Oddly enough, despite that it's clearly not intended to be used here, the text used for the holes is unique! It translates to "It is said that in the western mountain's cave, the demon Heckran resides, ordered four hundred years ago by the Great Demon King to protect the land where our God, Lavos, slumbers." (Video here.)

The ruins north of Choras underwent some heavy renovation, and palette differences aside these changes apply to the ruins in both 1000 and 600 AD:

As they're simply palette swaps of each other, it should come as no surprise that the 1000 AD West Cape underwent the same redesign as the 12,000 BC North Cape. The prototype version, however, lacks Toma's grave.

In the final version, the Forest Ruins north of Medina are rather enigmatic - it's a remnant of the Kingdom of Zeal, as an identical structure can be seen there, and an Enhasa NPC mentions that the "palace to the north" is where Zeal's "elemental weapons are sealed". Once you can finally deactivate the seal in 1000 AD, it comes as something of an anticlimax that all you get out of it is a choice between two sealed chests.

This build shows that it wasn't intended to be this way...

In the prototype, there are some extra graphics stored just off-screen, showing a large structure with a sealed door rising out of the blue blocks on the barrier-protected platform. And this door leads to a treasure-filled dungeon which was removed from the final game entirely.

Interestingly, the tiles for the structure are still present in the forest tileset in the final, but the structure itself has been deleted from the Forest Ruins map.

The interior design is perfectly in line with that of other Zeal architecture such as the Ocean Palace, Sun Palace, and Black Omen. Sadly, aside from that and all the exits working properly, there isn't much else to say - the chests all contain 500G, which is decidedly underwhelming.

The second and third rooms are on the same map, and both are loaded with more chests containing 500G. It doesn't matter which way you go, as both upper doors lead to the final room.

The final room was most likely going to have a boss battle, with some sort of elemental weapons being your reward for defeating it.