This is a sub-page of Proto:Chrono Trigger (SNES).

The map of 1999 AD, as seen in Arris Dome and the bad ending, underwent only minor changes; in both versions, the map is incomplete, with only what was needed in-game being designed. However, the prototype has some misplaced patches of grass in the dirt ground around the various domes on the western islands, which were corrected in the final.

While it's possible to visit this map in the final only via cheats/glitches, you can teleport here directly from the Epoch's era select menu in the prototype, and it's treated as a normal world map. However, the grid overlay from the Arris Dome display is always present (while it isn't in the final). None of the buildings can be entered in either version.

Finally, for some reason, there is collision detection in the prototype. It seems to be a carryover from whatever was used to make the map, as the collision is partly broken on the "Medina" continent.

The room where Lavos' second form is fought in the final went through a rather large change, going from a relatively mechanical area to something more organic. In addition to not occupying the same slot, the final map is also double the height for some strange reason.

Despite being a fairly small and unimportant area, the Sun Keep underwent a dramatic redesign: in the prototype, it was rather barren, apart from a hill in the back. The final added considerably more detail, including extra steps and an "arch" near the entrance. 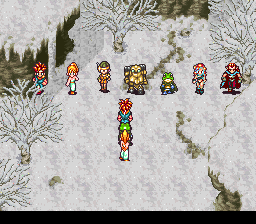 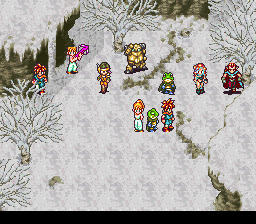 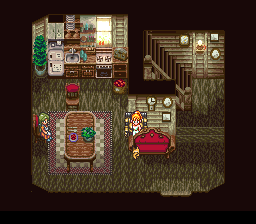 This test area uses the same map as Last Village Commons, functioning as a character selection area. Once three characters are pushed you are returned to Crono's House with that configuration, albeit in a wall. The palettes used don't appear to be correct, resulting in weapons having pink outlines and Ayla/Magus appearing teal and red. 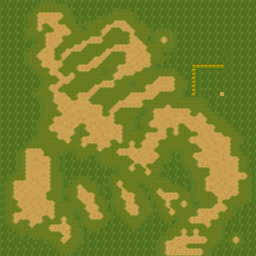 This large, empty field using prehistoric jungle tiles is repeated several times throughout the prototype, sometimes with events on it, sometimes completely empty. It appears to have served a dual purpose as a filler map and a testing area for assorted events.

The dirt appears to be in the shape of 鳥 (tori), a possible reference to Akira Toriyama (鳥山 明), the game's character designer. 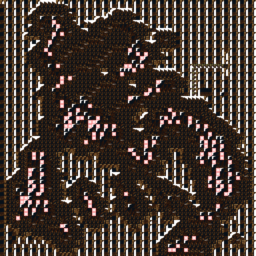 An "alternate" version of this area exists mixed in with the Algetty maps. It also erroneously uses its tileset, resulting in a glitched mess. 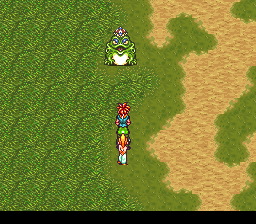 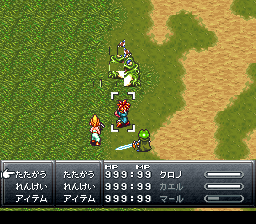 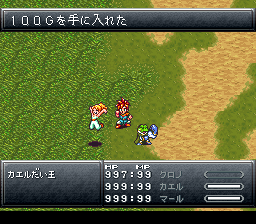 This area is used to test the Frog King, the enemy seen in Frog's flashback. Approaching gives some dialogue before a fight begins, although it's clearly unfinished as the Frog King not only graphically glitches, but dies in one hit due to not having any defined stats. It's very likely this enemy was never meant to actually be fought. 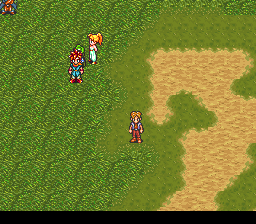 An odd area that contains an unknown man normally found in 1000 AD, and a default Melchior. No dialogue is associated with either character, leaving the area's purpose unknown. 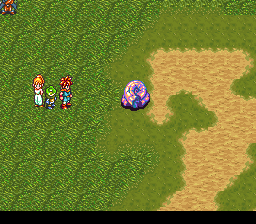 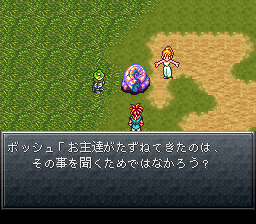 This area was used to test the cutscene when obtaining the Rainbow Shell. It's rather unfinished, with characters warping into place and only one dialogue box before it freezes. 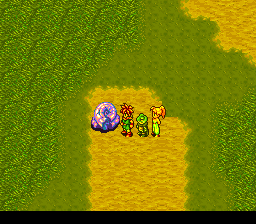 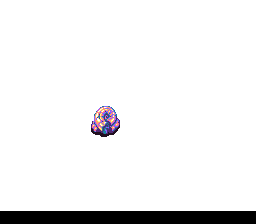 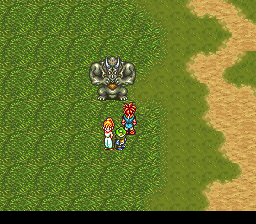 Another Rainbow Shell test area. Touching the Shell tints the screen slightly yellow, and interacting with it turns the entire screen white.

Nizbel is also present doing his flexing pose, but is otherwise non-functional. 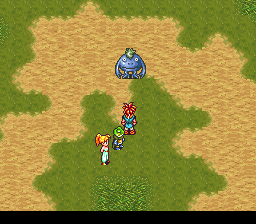 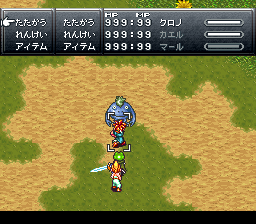 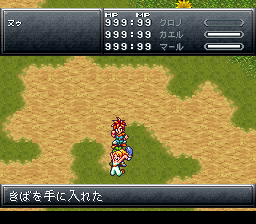 Another battle test area, this one being used for a Nu. Like the Frog King, the enemy dies in one hit and only does a basic attack.

Retrieved from "https://tcrf.net/index.php?title=Proto:Chrono_Trigger_(SNES)/Area_Differences&oldid=1043588"
Categories:
Cleanup > To do
Subpages