The prehistoric world map underwent some drastic changes...on the eastern half, anyhow:

The Mystic Mountains weren't altered as dramatically as a few areas were, but there are still several distinct differences:

Only a few palette differences in the "gate" cliff. The pink flowers in the prototype became yellow in the final, the trees and grass were brightened up, and the cliff tiles were darkened and adjusted to remove several green spots present in the prototype.

The base of the cliff features all the same palette changes as above, as well as several additional cosmetic changes. Some darker green (wet?) grass, dirt, and a small stream were added to the south exit, with a small "cave" being added as the stream's source. The nearby trees were modified to accompany this change in landscape, and extra trees were also added to the lower cliff, while some flowers and rocks were inexplicably removed from that same general area.

More of the same as above; all the same palette changes, and the stream and dirt path introduced in the previous screen follow the linear path all the way to the exit, with some flowers and rocks removed to make room for it. Also of note is the off-palette "600 AD" chest near the entrance, which would be replaced with a design unique to 65,000,000 BC in the final.

While the prototype's Ioka Village wasn't all too different from the final, there was one neat little touch that was sadly lost in the final: little sunbeams caused by tiny holes in the walls and ceiling. Other minor decorative tweaks can be seen throughout the various huts.

The prehistoric Hunting Range was another area that escaped with only minor tweaks as far as area design is concerned, but the monster formations are an entirely different story, as each and every one of them was changed. For starters, no Ion/Anion monsters appear on the field in the prototype (although they do exist), and the Croaker/Amphibite/Rain Frog and Ion/Anion enemies don't appear to be distinct monsters.

Ion/Anion monsters have a dark green palette in the prototype, as opposed to the black one used in the final.

In the prototype, the Nu that appear during the rain wander around. In the final, they simply stand there.

The Croaker/Amphibite/Rain Frog formation nearest to the entrance does not exist in the prototype.

A frog and two slimes were replaced with a standard Croaker/Amphibite/Rain Frog formation. There are no "mixed" formations here in the final at all.

In the prototype, a frog and four Leapers. In the final, yet another Croaker/Amphibite/Rain Frog group. Leapers do not appear on the Hunting Range in the final.

Yup. Another Croaker/Amphibite/Rain Frog battle in the final took the place of a group of five frogs.

A large group of six frogs in a hexagon formation was removed entirely in the final. There are no monsters on the upper ledges at all.

An Ion/Anion formation was added at the base of this cliff in the final.

The frog was removed from this formation in the final, leaving just the Ion/Anion.

The Reptite Lair underwent a handful of changes, although barring some chest placements, the main caverns were left untouched. The sub-caverns (pictured above), however, feature at least one significant change: the "emergency exit" cave (in the lower center of the map) was given a much more elaborate design. In the prototype, this was a simple setup consisting of some platforms and staircases. In the final, it was changed to a series of cliffs with rope ladders. The chamber where Nizbel is fought also underwent assorted renovations in the final.

The ruins of Laruba Village are inaccessible from the world map in the prototype, though the interior still exists. Several dirt patches were removed from the final, the statues near the entrance were slightly glitched in the prototype, and the palette used in the final was brightened slightly.

The Dactyl's Nest underwent some "prehistorificiation" from prototype to final. In addition to all the same palette changes and treasure chest updates seen in the Mystic Mountains, all the rope ladders were replaced with hand/footholds, and the rope bridge was replaced with a natural land bridge.

The summit of the nest is identical in both versions, barring the standard palette changes.

The prototype Tyrano Lair exists somewhere in a state between "almost finished" and...not. The layout is unchanged, but there are a significant number of event differences.

Note, however, that the area is still fairly unstable, even with these codes active, but it's only through their usage that additional differences between the prototype and the final can be seen.

The Cave Ape monsters look considerably more docile in the prototype. They were also slightly smaller, and used a slightly brighter palette.

The Laruban prisoners were given a distinct look in the final, while in the prototype they used a palette similar to, but not exactly the same as, the Ioka villagers.

The Reptite guards were of the weaker green variety in the prototype. The final replaced them with stronger purple palette swaps. 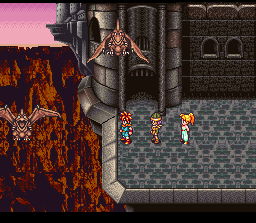 A pair of non-animated Dactyls, once used in a very early mockup screenshot, are hovering just outside of the warp room.

A Terrasaur and a Volcano replaced the two Cave Apes in the final. The switches work as they should otherwise.

Nizbel had yet to be updated for his return, using the same palette as in his first appearance. His "flexing" poses are also a fair bit different. 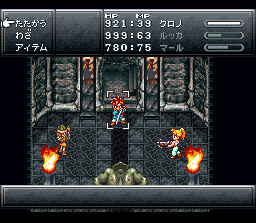 This early version of Nizbel is considerably easier to defeat than the update in the final. Not only does he do nothing but attack or attempt a completely useless "blank" move (seen above), he also has no special defenses, and can be damaged without being hit with a lightning spell beforehand. The normal battle theme also plays during the battle instead of the boss battle theme.

While in the final, pressing the center switch in the final switch room activates a save point, it's actually a fairly devious trap in the prototype. Pressing the switch drops a large stone sphere (which does not exist at all in the final) into the center of the room, effectively blocking you off and forcing you to jump down the pits to escape if you've opened them. 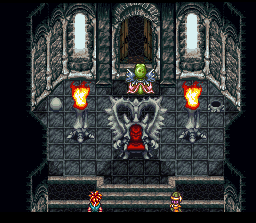 The encounter with Azala is rather strange and clearly unfinished. "Secret of the Forest" is awkwardly played during the dialogue in the throne room encounter, after which Azala walks out the back door, and the game resets to the title screen. Nevertheless, it's still possible to bypass this and trigger the Black Tyrano battle...

...which is just as unfinished as the Azala encounter before it. The Black Tyrano's body is actually background tiles; only its head is a sprite, and it's just... not here. The resulting fight is very easy, as you're fighting only Azala, and she can be taken out in only a single hit. After the "fight", the Black Tyrano simply disappears with no animation/effects, and Azala is shown laying where it stood. You can move around at this point and speak with Azala, but although there's quite a bit of dialogue, nothing else happens. Kino doesn't show up with Dactyls, and Lavos doesn't fall.

By far the most well-known of the prototype-exclusive areas is the Singing Mountain, due to its background music famously being included on the game's soundtrack while not appearing at all in the game proper.

The Singing Mountain was a prehistoric dungeon and, given its location on the world map and its song's position on the soundtrack, it's a safe bet that this was intended to have been explored (or at least made accessible) right after obtaining the Dactyls. It does indeed play the song you'd expect it to, but cannot be entered directly from the world map.

These maps were entirely removed, and replaced by the ones for the Black Omen, in the final. 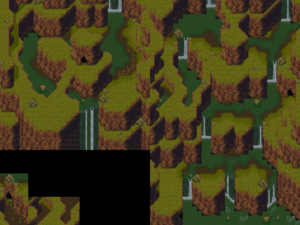 The exterior areas of the mountains are clearly unfinished. The entire area is mildly graphically glitchy, there are no scroll boundaries in place, collision data is largely unimplemented, and despite the appearance of a few caves, there are no exits. The design itself is also rather haphazard, with the cave entrances seemingly placed on inaccessible ledges, and no clear path leading upwards. The tiles in the lower-left corner, however, appear to suggest that it was necessary to move a boulder and block a waterfall, which would reveal another cave entrance. 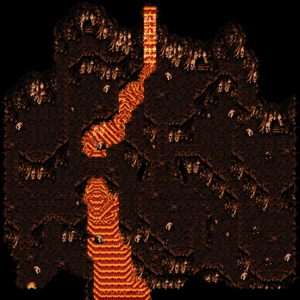 A river of lava.

There are two sets of maps for the interiors. This one appears to be the "meat" of the dungeon. It uses a tileset similar to the one used in Heckran's Cave, but with a red palette that effectively changes the water into lava. As is the case outside, there are no exits, and collision data doesn't appear to entirely be in place, but there does appear, at the least, to be a coherent design here. 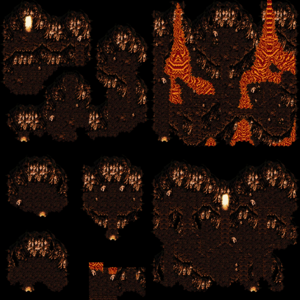 A whole mess of caves.

The second set of interior areas, which appears to be a series of smaller caves, many of which would presumably have housed treasure chests. The same lack of collision data and exits thwarts any attempt at trying to figure out what each area is meant to connect to, however.

The large upper-right room has a conspicuously raised platform, which suggests a boss fight may have been intended for this location, while the tiles in the lower center part of the map seem to hint at using rocks to stop the lava flow, and a door appearing on the back wall of the aforementioned raised platform.

The last part of the Singing Mountain is a small cave, very likely accessed from the "hidden door" mentioned above. It goes without saying, but whatever was supposed to happen in this dungeon would've come to its climax here.