While 600 AD's world map didn't get tweaked as much as 1000's did, there are still some subtle differences, and three somewhat significant ones:

Entering the Cursed Woods normally causes the game to reset to the title screen. It can be explored properly with the following codes:

With the lockout removed, it's clear that the Cursed Woods are finished. The design is identical to the final, as are the events, right down to the randomly appearing Nu. However, in the prototype, it uses the 1000 AD forest palette instead of the one for 600 AD forests.

Frog's house contained an extra (empty) chest in the prototype, which was removed entirely in the final.

While attempting to enter the Magic Cave from its south entrance will boot you back to the name entry screen, it can be entered and explored via the entrance near Magus' Castle. Its design is identical to its final incarnation, but there are a few event differences: 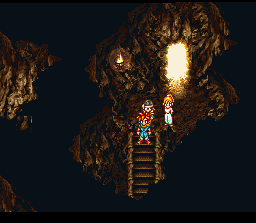 The dead guard with the warning note next to the entrance is not present in the prototype. 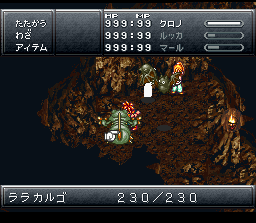 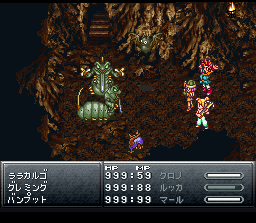 In addition to the rats and bats, some strange insect-like creatures that resemble Sir Krawlie appear in battle. These were removed from the final. 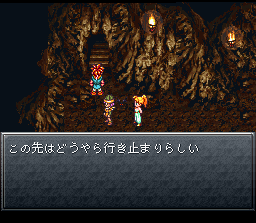 Attempting to exit from the other end gets you this message, which translates to "This appears to be a dead end.", and you're prevented from actually leaving. This is simply one of the prototype's "the demo doesn't continue beyond this point" blockoffs.

Yet another of many areas that resembles the final in terms of design, but differs in various subtle ways.

In the prototype, the Slasher, as seen mounted on the wall in Slash's room, was unsheathed. Its hilt also changed from brown in the prototype to gold in the final.

The monsters summoned by Ozzie were replaced with stronger palette swaps in the final. 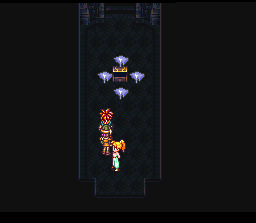 The fake children/shadow monsters regenerate upon leaving the room and returning in the prototype. In the final, they're gone for good once defeated. 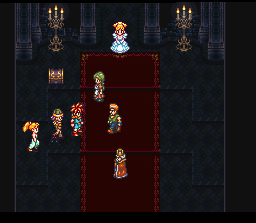 If Frog is not included in the team, Queen Leene will still appear in the "doppleganger" room, but does not move and cannot be interacted with.

The monsters transformed into (and summoned) by the dopplegangers are also of the weaker variety. For the record, the Sorcerers are also much weaker in the prototype. 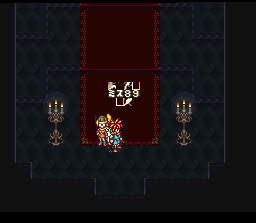 After defeating the first of the dopplegangers, a strange glitched object appears in its place. Touching it causes you to fight the same battle as before, after which it disappears. 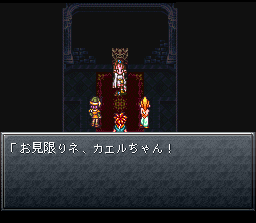 Flea's right leg is graphically glitched for some reason.

The guillotine chamber is slightly different in the prototype: the little room at the end was moved back one tile, the carpeted stairs were changed to extend across the entire hall, and the lower-right guillotine was moved up one tile.

More minor architectural differences: The columns in the statue hall were all moved down slightly. There's no particular reason for this change, as although it's possible to avoid battle by walking around the statues in the prototype, this cannot be done in the final due to a different monster setup. Plus, the statues can still be walked around.

The Roly monsters in the side-view tower areas have a broken palette in the prototype. In addition, the final uses standard Rolies in the first tower and the black Roly Bombers in the second. In the prototype, Roly Bombers appear in both towers. They also do not self-destruct when attacked, but rather counter with an attack on the entire team.

The symbol in Magus' chamber is brighter in the prototype. Also, while it cannot be seen in-game, a second duplicate chamber is present in the prototype alongside the normal one. What purpose this would have served is unknown, but it was cut from the final entirely.

The Sunken Desert exists in a very preliminary state in the prototype. It's clearly unfinished, and differs greatly from its final incarnation:

The first part of the cavern is much smaller and less interesting in the prototype, and contains no treasure chests whatsoever.

However, the second part of the cavern, when compared to the final, is much bigger, far more elaborate, and absolutely loaded with chests! Unfortunately, the developers evidently deemed this a tad bit...much, and decided to scale it down drastically. 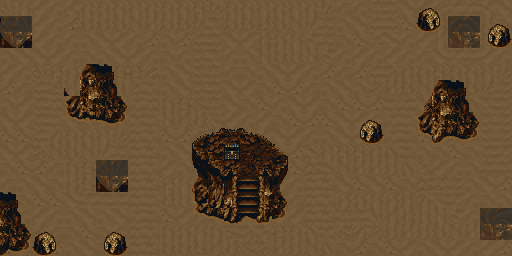 Also present with the Sunken Desert maps in the prototype is this mess. Whatever this is appears to be incomplete (note some of the poorly-placed tiles), although whether it was the start of an unfinished and ultimately scrapped third section, or simply a place where graphics to be used later were pulled from, is unknown. This...thing isn't present in the final at all.

Ozzie's Fort is in a very preliminary state in the prototype. There are no events present, no scroll boundaries in place, and the background music ("Underground Sewer") has water effects in the background, unlike the final.

Structurally, however, it isn't a whole lot different. An extra room was added in the final, as were two chests in the largest room (where Ozzie and company are fought), the secret room where Magus' strongest equipment can be found doesn't seem to exist in the prototype, and the prototype also features a strange pit shaped like an upside-down T in the final chamber.

The Giant's Claw may be inaccessible from the world map in the prototype, but maps for it do exist, and although there are no events whatsoever (not even chest data; chests simply don't open at all), all the exits are perfectly intact, allowing for exploration.

The dungeon's assorted smaller caves were moved around for some reason, although only the upper-right (prototype)/lower-right (final) room saw much in the way of real changes, going from a dead-end treasure room in the prototype to an emergency back exit in the final. The empty room in the lower right (prototype)/upper right (final) is accessible in the prototype, but not the final.

An extra cave entrance was present in the first large tunnel in the prototype. It leads to the Tyrano Lair teleporter maze (which inexplicably plays the Guardia Castle theme), then exits to the small empty room mentioned above. This was closed off in the final, and the teleporter maze is no longer accessible.

Other minor changes to this room include a chest on the far right being replaced with a Power Tab, and the cliff near the south exit being lengthened slightly.

The second large tunnel features a rope ladder in the final which was not present in the prototype, which eventually leads back to the entrance. As you have to fall into a pit in order to proceed, this is necessary in order to leave.

A chest in the upper part of the room was also removed, but unlike the instance above, it was not replaced with anything.

The final area was changed significantly for the final. Originally, it was a one-screen cave containing the Rust Tyrano, while another cave present in the back that has no noticeable entrance was presumably used to house the Rainbow Shell. In the final, it was changed to a straightforward tunnel. The Rust Tyrano's red palette had also yet to be included, so it looks exactly the same as the Black Tyrano. 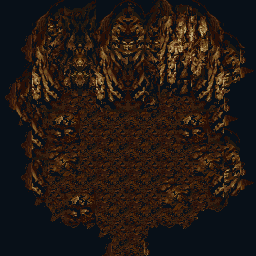 Removing the Tyrano from the map reveals nothing behind it. The structure of the final area would suggest that a cave was supposed to appear upon its defeat.