This page details one or more prototype versions of ClayFighter 63⅓.

A prototype of ClayFighter 63⅓, commonly called the "beta version", was leaked on the Internet at some point. It's mostly the same as the final, but with a few differences. 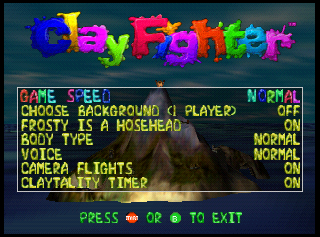 The Secret Options menu has a couple of items missing from the final menu: