This page details one or more prototype versions of Freedom Planet. 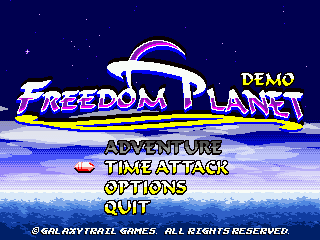 These two builds gave some first insight into the game, not too long after Strife intended for it to be its own intellectual property. They still contain a few traces from their Sonic fangame roots.

Backers who pledged $50 during the game's Kickstarter had the opportunity to test the game during its Alpha phase. Occasionally, the public would also get a few demo versions that were based on them, but the meat can only be found in the full versions. 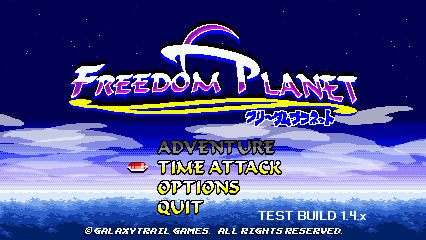 Titled "Like a Boss"; composer Leila Wilson originally wrote it for a personal project, Symphony of Shifting Tides (then known as Elancia Chronicles), and it was included in Freedom Planet starting with v1.5 as a placeholder for boss fights with Prince Dail. By the game's release, it was replaced with a proper theme ("Prince Dail Boss Battle" from the OST). The placeholder itself was later remade and uploaded to SoundCloud in October 2014 following the game's publication.