This page details one or more prototype versions of Mario & Luigi: Partners in Time.

Two very late pre-final builds of Mario & Luigi: Partners in Time, a US store kiosk demo and an EU store kiosk demo. These mostly identical builds both grant you access to either Toadwood Forest or the interior of Vim Factory. 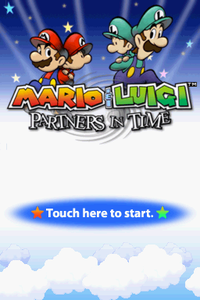 When booting up the demo the player is greeted with a screen featuring artwork of the four Bros, the game's logo, and a message saying "Touch here to start" with red and green stars flickering to its sides.

When pressed, the screen transitions to the DS' standard epilepsy warning, and then to the "Alpha Dream / Nintendo" logos and title screen like in the final game (with the only difference being the text "Demo Version", which can be found underneath the logo). 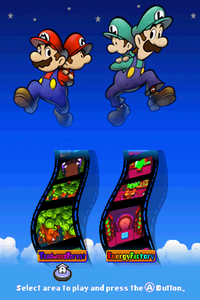 Pressing Start leads the player to a screen allowing them to choose between either "Toadwood Forest" or "Energy Factory" (a literal translation of Vim Factory's Japanese name). These graphics still exist in the final game, alongside the one for the fabled Yostar Island. 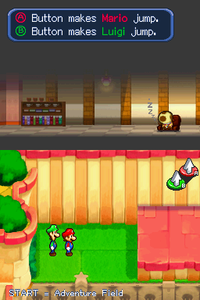 Selecting either of these areas brings you to a tutorial area narrated by Toadsworth. This tutorial is set in Peach's Castle, and teaches basic overworld actions, which in the final these are told either in the outskirts of Hollijolli Village or in Bowser's Castle (interestingly, in the final game, the Bros. Move tutorials are the ones set in Peach's Castle). At the very beginning of the tutorial the player is given the choice to skip it, which brings the Bros. to the blue pipe room leading to the area they chose (finishing the tutorial or pressing "Start" at any point during it also leads you to this very room).

When selecting Toadwood Forest, the player starts with Mario and Luigi both at level 8 and Baby Mario and Baby Luigi both at level 9. In their inventory are eight Mushrooms, four Mushroom Drops, and two 1-Up Mushrooms. Their equipment consists of Branded Slacks (Adults) and Preferred Pants (Babies). They have in their possession 12 Green Shells, six Bro Flowers, and four Cannonballers. The Cobalt Star and Badge options are missing.

As for Vim Factory, the player starts with Mario and Luigi both at level 15 and Baby Mario and Baby Luigi both at level 14. In their inventory are 12 Mushrooms, six Mushroom Drops, and four 1-Up Mushrooms. Their equipment consists of Puffy Trousers (Adults) and Heart Pants (Babies). They have in their possession 10 Green Shells, eight Bro Flowers, and eight Cannonballers. The Cobalt Star and Badge options are still missing.

For comparison, in the final game the adults start at level 1 and wearing Wafer Slacks, and the babies both start at level 3 wearing Silky Pants. As for Stuffwell, he only comes with 10 Mushrooms upon "joining" the party.

The enemy stats from the kiosk demo are mostly those used in the EU version of the game, with lower HP overall but higher POW and DEF for most enemies. There are, however, some differences that are unique to the kiosk build:

In Toadwood Forest, the player has to collect a total of five "Stars" in order to complete this area of the demo. Their sprite (which still exists in the final game) is a golden recolor of the full Cobalt Star, and they are mostly found in blocks within stumps. When hit, the star shoots out of the stump like a 100-coin for the player to collect (a star will despawn once you leave the room it's in, but the block containing them is reset once you re-enter it). As for "Energy Factory", the goal is to defeat the "boss monster", which is none other than Swiggler. 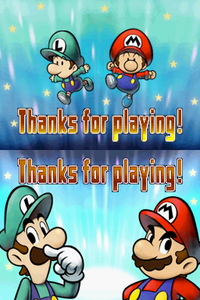 Completing an area brings you to a screen where the Bros. thank you for playing. It's interesting to note here that the artwork for Baby Mario is the one shown in the E3 press kit, but edited to have the correct shoe color.

Differences between US and EU Versions

The epilepsy warning screen is slightly different in the EU version, with the text being less condensed as it lacks the line above "Touch the Touch Screen to continue". 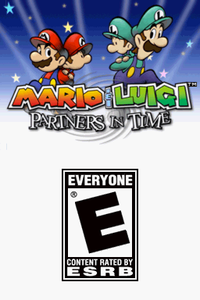 In the US version, after the epilepsy warning is a short screen showing the game's ESRB rating. No equivalent for this screen exists in the EU version.

The EU version's level select screen uses "Vim Factory" instead of "Energy Factory" like US does.

The "CLEAR!" graphic in the EU version is larger and more blocky, as well as lacking the dithering present on its US equivalent. The EU graphic and the jingle associated with it would later go on to be used in the final game in the timed Bros. Ball section of Gritzy Caves, as well as the first UFO shootout section in Shroob Castle.

The pier on top of which the Time Hole normally sits doesn't exist, and the Save Album and Pipe Block are also absent. The fence at the bottom of the room was also made duller in the final game. All the blocks which contain coins that are worth 100 now have Stars inside them. None of the Toads have dialogue. Toadiko and her cutscene are also missing, but judging from the E3 press kit's screenshots it can be deduced that it was simply removed for the demo's sake.

In the room with the high stumps, there are only three glass blocks instead of six; it's unknown if this was the original intent or if this was changed for the demo. In the underground part of this area, the Elasto Piranha normally found near the topmost glass block is missing. 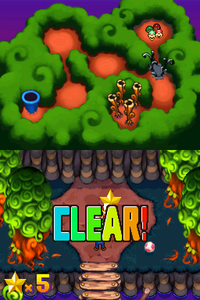 In the last room, the Pipe Block, bean spots and blue pipe are all missing, and a Star can be found where the pipe normally would be. Collecting the Star plays a little jingle while the word "CLEAR" shows on the screen, marking the end of the demo.

The Save Albums are missing and it's impossible for the Babies to dig underground despite the Hammer being available; as such, the gate in the second room is gone. The enemies normally in this room are also missing, more likely to make the demo easier and shorter. 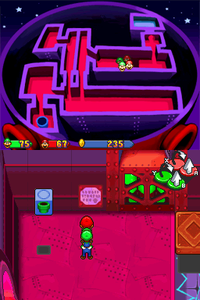 The room with the electrical pit, while it lacks the Dr. Shroob, actually has something not found in the final game! Near the Pipe Block and the entrance to the Babies-only area is a sign describing how Cruise Platforms work. Interacting with the sign the message brings up the message "Use Cruise Platforms like the one on the right and savage pits will terrify you no more. You should be able to start this Cruise Platform by hitting a block somewhere...". This sign was most likely removed due to the exterior of Vim Factory (which is missing in this demo) already serving as a tutorial on how to use Cruise Platforms.

As for the Baby-only area, the Cruise Block is found where the first Spiny Shroopa normally is as opposed to being next to the Bean spot. Back with the adults, the first platform is missing its block, and afterwards the bottom right block in the four block formation contains four Copy Flowers as opposed to three Green Shells. 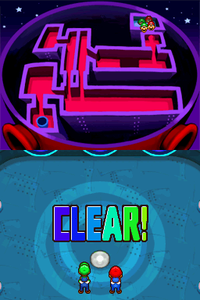 Proceeding forward in the following rooms plays Swiggler's cutscene and starts a battle with it like normal, with the only difference being that the battle is rather short and easy, seeing as how the Bros' stats are quite high in the demo. Beating Swiggler plays a little jingle while the word "CLEAR" shows on the screen, marking the end of the demo.

These prototypes appear to contain quite a large amount of unused content in the form of data for attack patterns used by enemies which don't appear in the levels available in this prototype. The same thing also applies to maps, although they all appear to only feature objects and no other graphics.