This is a sub-page of Proto:Mario Kart: Double Dash!!/Multi-Game Demo Disc Demo.

Since you can only select Mario Circuit, there are some course previews that are different from the demo, plus some unused ones. Peach Beach, Mushroom Bridge, Sherbet Land and Mushroom City all have the same images.

Interestingly, many of those images depict earlier designs for the courses.

There's a lot of leftover E3 graphics hidden in SceneData\English.

The E3 title screen in the trailer. 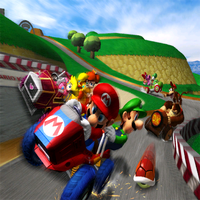 The E3 title screen which uses the early logo. Note that Peach and Daisy's kart has been slightly moved between the trailer and these files. 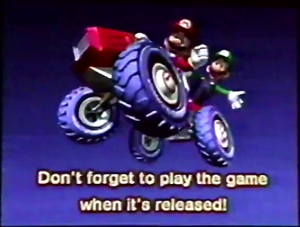 The screen as seen from the E3 booth. 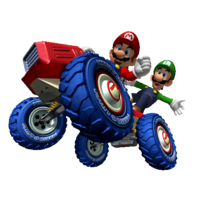 The E3 game over screen.

The E3 Luigi's Circuit logo can be found at MRAM.arc/race2d.arc. None of the other E3 logos are here though, except the Peach Beach logo. 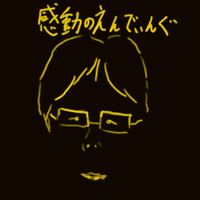 Hidden ending message graphics. The ending screen has "感動のえんでぃんぐ" (exciting ending) written on it, while the man is saying "ピース" (peace) and making the "peace" gesture.

Placeholders for a time attack screen. The first graphic says "名前を入力してね" (please enter your name), while the second graphic says "タイムアタック" (time attack). Also note the misspelling in "best lap time" button, possibly due to L and R not being distinguished in Japanese.

Some early character icons, which show that Donkey Kong Jr. was originally planned to be included in the game. Diddy Kong's filename uses "dk_jr" as a replacement.

The icon for mirror mode also seemed to go through a drastic change.

The icon for special cup is missing its mouth.

Same with the special cup, the all cup tour have some different icons. The early icon has the cup models facing different directions, while the final icon has all four icons facing the camera.

Oddly Luigi's Mansion is refered to as "Y Maze" in SceneData/English/LANPlay.arc.