From The Cutting Room Floor
< Proto:Pokémon Diamond and Pearl
Jump to navigation Jump to search

This is a sub-page of Proto:Pokémon Diamond and Pearl.

On July 24, 2020, the complete source code for Pokémon Diamond and Pearl was leaked. The data corresponding to the version control system it used - CVS - was intact, to such an extent that a large number of file versions from commits from March 2006 onward are now available to us.

While no builds were present within the repository, a number of builds can be compiled from a handful of the commits. As such, the true extent to the revision history of the game cannot be captured by a small selection of builds, but they still provide key snapshots of development that can provide useful insights.

As we have the full history of the files which go into the build - perhaps most notably the Pokémon sprites in "pokegra.narc" and the SDAT files holding the game's soundtrack - the specific histories of those files are also documented here. The subpage for each build will specify which version of each of these files are used in the build process.

The English, Korean, and European debug ROMs were also compiled, along with a debug English demo ROM. They are otherwise completely the same as retail, so they are left undocumented.

Though the commits in the source data range from March onwards, much of the data within the commits seem to be from quite a bit earlier. Specifically, the .imd and .gmm files in each commit contain what is understood to be a more accurate means of dating the data than the commit dates themselves. With that in mind, the builds listed below - which were built from key milestones within the commits - are dated corresponding to the dates on these .imd and .gmm files, though many of them correspond to commit dates which are a bit later in development.

The builds have been grouped together to split development into three phases:

Asset differences from the source code, listed by their commits (or by the gmm / imd dates in the same commits). Each of the build pages will also link to each of the pages corresponding to the assets used by that build.

The first compressed narc file was included within the March 12th commit. However, the files in this commit actually seem to be from around mid-February, given the dates on the .imd and .gmm files within this commit.

Although the gym leaders' trainer sprites are not available in the prototype, the badge case gives a glimpse at some earlier designs for the characters. Notably:

In particular, Crasher Wake's mask seems to resemble a Swampert, which may have fit into his location on the Great Marsh. 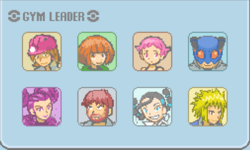 The badge case before defeating the respective gym leader gives a glimpse at earlier designs for each character.
Retrieved from "https://tcrf.net/index.php?title=Proto:Pokémon_Diamond_and_Pearl/March-August_2006_Source_Leak&oldid=1032287"
Categories:
Cleanup > To do
Cleanup > Works In Progress
Subpages