From The Cutting Room Floor
< Proto:Pokémon Emerald
Jump to navigation Jump to search

This is a sub-page of Proto:Pokémon Emerald. 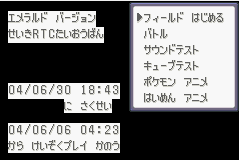 This menu can be accessed on the Title Screen by pressing Select. There are two pages here, which can be scrolled between using Right and Left on the D-Pad. On the left, there is some information about the build.

Below is the listing of the build date. This is the exact same build date as the final Japanese version, indicating that the only difference between the debug and the retail build is the removal of debug features.

Under that is what appears to be the last major build. 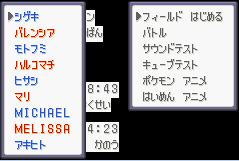 This opens a second menu where you can scroll through a list of names. Picking any of them loads up a file with the player at the very start of the game. However, these files have been given several things for the purpose of debugging. They have the Running Shoes, PokéDex, and PokéNav, as well as a level 95 or 99 Treecko with the moves Leaf Blade, Psychic, Surf, and False Swipe. Treecko cannot naturally learn any of these moves, though its evolutions can learn Leaf Blade and False Swipe. They also have 10 Pokéballs, 15 Great Balls, 20 Ultra Balls, and 25 Master Balls. They have some of the main key items, consisting of the Acro Bike, Old, Good, and Super Rods, a Pokéblock case with a variety of Pokéblocks, the Wailmer Pail, and Dowsing Rods. These files also have a unique feature. Holding down R allows you to walk through walls. No wild encounters will occur, and trainers do not spot you. Letting go of R will immediately disable the mode. 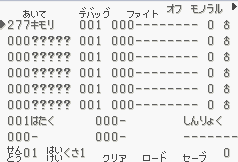 Starting on the left, the first column allows you to pick the teams that will be used in battle. The number on the left represents the Index Number of each Pokémon, and the number on the right is the level. Pressing Select while your cursor is on one of the Pokémon switches you to the Moves section for that Pokémon.

The second column allows you to select the item each Pokémon will have in battle. Like the Pokémon, the items are in order of Index Number. There are quite a few dummy items that are just question marks, if they are chosen your Pokémon will not have an item in battle, and giving your Pokémon any type of a Poké Ball, will make them appear as caught in it. Pressing Select brings you to the Moves section for the current Pokémon.

This column sets a value between 0 and 8. It is unknown what this controls specifically, although setting it to 6 or higher makes the Pokémon shiny.

As expected, this allows you to set the gender of each Pokémon.

Going down to the middle row, we have Moves. Pressing Select while your cursor is in the Pokémon or Items section will lock you into this section. It allows you to pick the moveset for the relevant Pokémon. The moves are in Index Number order and there is no restrictions on what moves you can choose. Pressing Select again will return you to the usual navigation mode.

Displayed next to the moves. It does not appear that you can select which ability a Pokémon has if it has more than one.

Now the bottom row. On the bottom left, Battle allows you to pick from 15 different battle types.

The default trainer is different depending on the battle type. 2-4 default to a male Aqua Grunt, 8 is Hikers, and 9-15 are all Youngsters.

Triggers different backgrounds. These just change the appearance of the battle, and do not activate any weather effects.

As the name suggests, clears everything. Pressing Select will cause a debug overlay in battle.

Loads a saved set. If no set has been saved, it will load garbage data into the slots. Trying to start a battle without hitting Clear will crash the game.

Allows you to modify a value from 0 to 8. 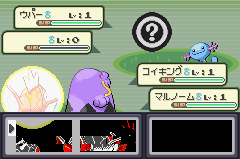 Start allows you to switch between seeing your opponent's health bar and their exact hit points. Start in the moves menu allows you to scroll through every move based on Index Number. Start shows the move as if you were using it, while Select shows the animation as if your opponent was using it. This feature has the side effect of creating some delightful graphical glitches in the menu. Once you enter this mode you cannot get out of it, effectively softlocking you. 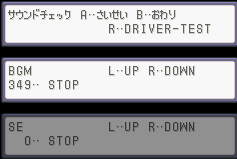 This sound test is practically identical to the sound test in the German Ruby Debug Version and the FireRed and LeafGreen Debugs, however, the Sound Meter is not included. Every track and sound effect from FireRed and LeafGreen is present. Up/Down maneuvers between music and sound effects, Left/Right scrolls the tracks, A starts and stops each track, L brings you to the Sound Effect Test and R takes you to the Driver Test. 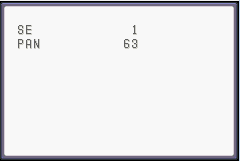 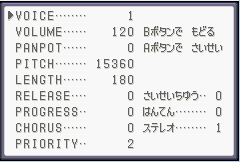 Lets you experiment with Pokémon cries by changing different sound parameters. Left/Right scrolls through the options, L/R increments by 10. Select toggles the first option at the right which seems to be echo. Start toggles the second option which plays the sound in reverse.

Does nothing. May have been related to connecting to the GameCube.

A mode where you can test the movements assigned to front sprite animations. The functions of the buttons differ depending on what option you currently have highlighted, but in general A and B are used for scrolling through the choices, L/R increment by 10, and Start shows the animation.

Lets you pick which Pokémon's sprite you want to view. Each Pokémon starts with their default animation effect.

Asks if you want to save or load something. Whatever you pick, nothing seems to happen.

All of the animation effects. The amount differs depending on the Pokémon. Some Pokémon have over 100 options, causing the counter to display a question mark.

Changes the intensity of the effect, from 0 to 255.

It's like the front sprite test..... but for back sprites!

Lets you pick which Pokémon's sprite you want to view. Each Pokémon starts with their default animation effect.

All of the animation effects. The amount differs depending on the Pokémon. 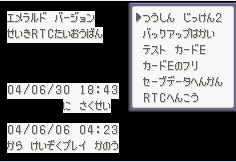 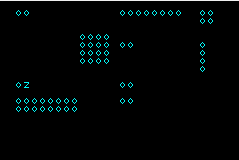 WARNING!!! Choosing this option will corrupt the current save file! Very similar to the German Ruby Debug. Displays a screen that shows various link-related parameters. Pressing A makes one of the zeros flash to a one for a split second. Pressing L makes it disappear and fade in again. 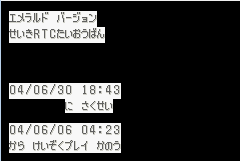 WARNING!!! Choosing this option will immediately delete the current save file! Makes the menu disappear. Resetting the game shows that the save file has been completely wiped. 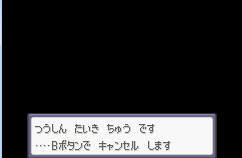 Gives a communication error. B returns to the title screen. 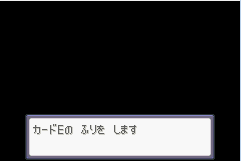 Likely has functions similar to German Ruby Debug when linked up to another copy of Emerald. 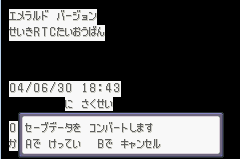 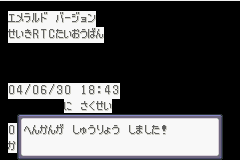 Prompts to press A to confirm or B to cancel. Pressing A immediately gives a "conversion completed" message. 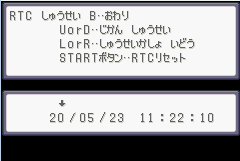 Brings up a page that displays the current time. Should theoretically allow you to change the clock, but appears to not work in this build.

Retrieved from "https://tcrf.net/index.php?title=Proto:Pokémon_Emerald/Test_Menu&oldid=866775"
Categories:
Cleanup > To do
Cleanup > Works In Progress
Subpages