This page details one or more prototype versions of Puggsy (Genesis). 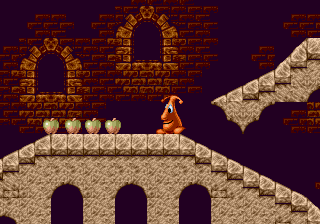 Prototype 0.1a of Puggsy is effectively a tech demo. Judging by the header, this was compiled in November 1991.

This build was released by developer Jon Burton through his GameHut channel on September 23, 2017, albeit in a rather unconventional way: through rapidly-flashing images in a YouTube video (seizure warning!). If the data was correctly decoded and converted, it resulted in the ROM.

By default, the game only works on Model 1 Genesis units, as the ROM doesn't write SEGA to $A14000. A patch has been made to address this along with the checksum issue.

The demo uses a very incomplete version of the Red Wood tileset.

Puggsy has no arms in the prototype, though this doesn't affect his ability to pick up objects. His eyes are lacking a shine and are bluer, while his mouth had an extra pixel added for the final version to keep the smile inside the sprite. When standing still, his right foot is raised up rather than being level with the ground, while his left foot sticks out more.

In this build, all of the objects Puggsy can pick up are rotten apples. However, graphics are loaded for beach balls and balloons.