From The Cutting Room Floor
< Proto:Shadow Warrior (1997)
Jump to navigation Jump to search

The September 16th, 1993 Shadow Warrior prototype (called Ninja) is a proof of concept demo sent to Scott Miller of Apogee by Jim Norwood, one of the game's original creators. The demo is a very barebones first person game that features the player in a Japanese-like environment with some ninjas roaming around. There is nothing to do besides explore the level and quit. This is a rare glimpse at what a game looks like when it's first pitched to a publisher.

Of note is that the graphical style in this prototype is very similar to the graphics seen in the 1994 prototype, including some graphics shared between the two.

This demo has a neat little intro that plays as soon as the game is started. It starts off with a shot of a city with cars moving and a helicopter flying to the city, then cuts to an image of a guy in a room getting ready to do some martial arts stuff. Suddenly, a yellow bolt comes down and he turns into a NINJA!!!! The intro then repeats until the player hits a key, after which the player is sent to the demo's playable level.

The demo runs on a Wolfenstein 3D-like engine that was likely created by Gerald Lindsly, a programmer that worked on Monster Bash.

This prototype does not have any weapons to fire, but the game does register something when the player hits "Enter" once. 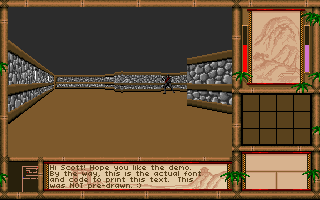 This demo uses a HUD that doesn't match any other HUD in the Shadow Warrior prototypes, though it does have some stylistic similarities with the HUD in the 1994 prototype.

The takes up both the bottom the right sides of the screen. The right side has a red bar and a pinkish bar (like the 1994 prototype) and some boxes underneath the bars.

The lower part of the HUD contains an automap in the lower left-hand corner and a box in the center of it. The automap represents the player as a dark blue box and the ninjas as red boxes. In-game, the center box has a message to Scott Miller that is drawn in real-time. The lower right-hand corner is a box that is further divided into three smaller boxes.

Of note is that the raw graphics for the HUD show a ninja with an evil glare in the box where the automap is, possibly as a placeholder.

This prototype has some hidden graphics inside its files that can be extracted.

An animation for tossing a gray and less detailed version of the Bomb weapon from the 1994 prototype can be found.

A set of sprites that are exactly the same as the hand used for casting the Red Arrow spell in the 1994 prototype can also be found. This shows that the concept of casting spells came with the game extremely early in production.

This prototype comes with a very large sky texture that is quite similar to one found in the 1994 prototype.

This prototype contains a set of textures that go unused in the demo itself.

A graphic containing a black box with a gray box that says "DEBUG MAP" in a blue font underneath it appears in the game's files. 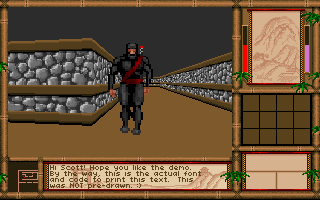 The prototype only contains one enemy, a ninja. The sprites for this enemy are the same as the ones used for the ninja in Shadow Warrior 1994 prototype.

This prototype comes with only one level.

The level itself consists of a small set of interlinked corridors with the occasional ninja standing or walking around, and a very large empty area that surrounds the corridors the player can access.