From The Cutting Room Floor
< Proto:Shadow Warrior (1997)
Jump to navigation Jump to search

The August 1996 Shadow Warrior prototype shows the game getting closer to the final game. While many of the levels are still either WIP or don't exist, the arsenal has been mostly finalized. Meanwhile, enemies, graphics, sounds, music, and items are mostly the same as they were in the previous prototype. It seems that the game is getting closer and closer to reaching the final Shadow Warrior as we know it, but still has a bit to go. 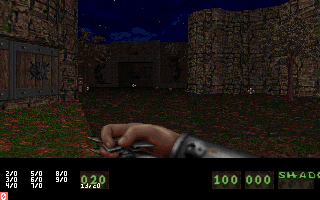 The main graphic for the HUD has been removed, but everything else works fine. If the player removes the HUD, then brings it back, the HUD will show a hall of mirrors effect.

In many levels, the use key doesn't seem to work. This means that doors cannot be opened and switches cannot be pulled, making it very difficult to explore most of the levels. Most likely it was due to some kind of core change to sector functions with levels not being updated rather than something to do with the key itself. Thankfully, all of the levels affected by this are in earlier prototypes, so there's no real loss.

Turrets now function, unlike previous prototypes. They cannot be destroyed.

The inability to destroy turrets will stay in the rest of the prototypes. Only the final game lets the player destroy them.

This prototype adds the cheat "swclip", which allows one to fly through walls. However, this tends to crash the game if the player tries to go through a thick wall.

Sounds and music are the same as the previous prototype.

The weapon order has been changed a bit in this prototype. The Katana and Shuriken are both accessed with the 1 key, which moves down each weapon by one key. The final game undoes this and gives the Shuriken the 2 key, like in earlier prototypes.

The Katana is the same as it was in the previous prototype.

The armband on the Shuriken's first person sprite has been modified to better match the rest of the armbands in this prototype.

In-game, it behaves the same as it did in the previous prototype.

The Uzi is the same as in the previous prototype.

The Rocket Launcher is much closer to the final design, but still has some elements from the previous prototypes' designs, such as the white dots in the center of the gun.

This prototype gives the ability to either fire a single rocket or the burst-fire more from previous builds. When the 20 rocket mode is selected, the number on the gun will switch to 20.

The Sticky Bomb now has spikes sticking out of it and behaves like the final's, but the stripe on it is still blue instead of the player's color.

The ability to put Sticky Bombs on enemies is bugged in this prototype. A bomb can be stuck on an enemy, but will not follow the victim while he moves, making it appear static. It will still explode a second or two after being put on someone, however.

The Railgun has received a cleaned up first person sprite that is similar to the final design in idea, but differs in several ways, such as having a larger scope, a bigger and lighter blue portion that has a completely different design, and a smaller rear.

When fired, the Railgun shoots a projectile that explodes with a trail of smoke following it from the muzzle instead of an energy wave that causes little chunks to come out of a wall if it hits a wall, or blood if it hits an enemy. This is similar to how rockets were fired out of the Riot Gun and Railgun in the previous prototypes, but the Riot Gun's smoke trail had a small limit.

The Ripper's Heart is the same as it was in the previous prototype.

The Guardian Head has a new draw animation. When the weapon is pulled out, the head will turn toward the camera, open and close his mouth, then turn back. The head used in this animation appears to be from a different source than the one used for the regular sprite, and it's much darker and has different details than the other one.

It behaves the same as it did in previous prototypes, but the head graphic no longer changes position when changing the firing modes, making it difficult to see what firing mode the weapon is currently on.

The enemies are the same as the previous prototype, but with one humorous difference.

The rocket the Red Ninja shoots is a flying graphic for the Railgun's first person sprite instead of the proper sprite because someone forgot to update his sprite definitions when the crossbow arrow/rocket sprite was changed. Ooops.

Several items from previous prototypes, such as the old rocket ammo for the Riot Gun/Railgun, have been removed with their sprites replaced with a placeholder that says “DELETE ME” in red text.

Interestingly, one of the items deleted is the Uzi magazine item, but not the box of Uzi rounds item. It seems the developers replaced the box of ammo sprite with an Uzi magazine, then reduced the amount of ammo accordingly.

This prototype adds a new item, the Environmental Suit. This item protects the player from dangerous substances, such as lava, for around 60 seconds.

When the item is active, an icon of the items will be on the upper left-hand corner. It will begin to flash soon before it expires.

The sprite itself will blink in and out because it occupies a space for the white potion seen in previous prototypes, which did have an animation. Since the other frames no longer exist, the game will show nothing.

This item was removed from the final game, leaving the player with no way to protect himself against deadly liquids.

The level $airport has received some touch-ups, but otherwise the levels are the same as they were in the previous prototype.