From The Cutting Room Floor
< Proto:Sonic the Hedgehog (Genesis)
Jump to navigation Jump to search
This page contains changes which are not marked for translation.
Other languages:
English • ‎polski

This is a sub-page of Proto:Sonic the Hedgehog (Genesis).

Green Hill Zone, having been present since the very beginning of Sonic the Hedgehog's development, is the most polished Zone in the entire prototype, and the only one that ends with a boss battle.

However... it's still a ways off here from what eventually shipped, in no small part because it is teeming with giant boulders of destruction. (They're in all three Acts!)

The background of Green Hill Zone had 3 unique layouts in the prototype, unlike the final which only uses 1 layout. 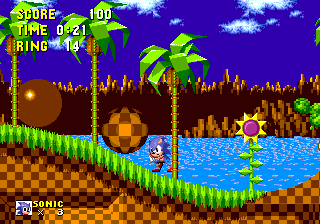 This palm tree near the bridge didn't have a spring on top yet.

The design of these chunks were changed to emphasize the impression that the foreground cliff is jutting out.

There are spikes on the wall just below the spring. These were removed in the final game.

This area underneath the spiked wall had a spring surrounded with two spikes. The final build removes the extra spike and leaves only one spike on each side.

The platforms on the hill above the two S tunnels are missing, however an Invincibility monitor is present. The nearby flower is also shorter than in the final game and the shading on said hill also doesn't go as far up.

One of the rocks near the start was removed, and a yellow spring is placed on top of the other rock in the final. The rings were also moved up.

A 1-Up Monitor hidden behind the Speed Shoes Monitor was replaced with a Shield Monitor.

The prototype has an extra row of rings here.

A checkered boulder was removed, and a missing spike was added. A crumbling platform was also added to the ledge above.

A set of three spikes were removed, and a green Newtron was added on the wall to the right.

There are many unused chunks for Green Hill in this prototype, unlike the final game's total of zero.

Chunk 2A is notable for using border tiles reminiscent of those seen in the 8-bit versions' rendition of Green Hill Act 2. These tiles still exist in the final game, where they're likewise still unused.

While unused in this prototype, chunk 3A appears to be an earlier version of what would become chunk 02 in the final game. After flipping chunk 02 horizontally and removing its three palm trees, the two align perfectly, shadows and all:

Retrieved from "https://tcrf.net/index.php?title=Proto:Sonic_the_Hedgehog_(Genesis)/Green_Hill_Zone&oldid=1171676"
Categories:
Cleanup > To do
Subpages