This is a sub-page of Proto:Spyro 2: Ripto's Rage!.

The August 11th, 1999 Prototype of Spyro 2: Ripto's Rage! is a preview version of the game dated around a month and a half prior to the final PAL release version. It was released on April 17th, 2021. 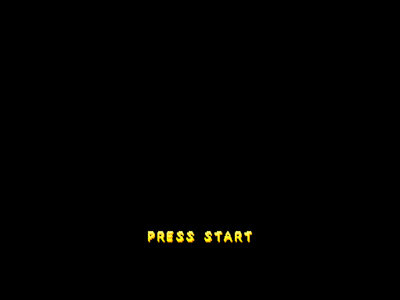 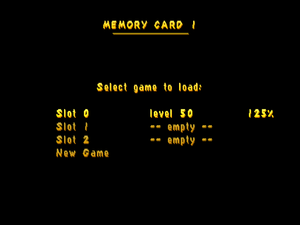 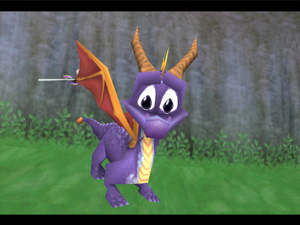 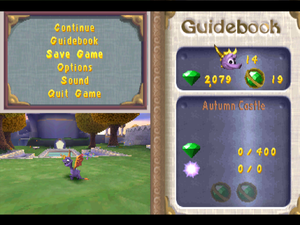 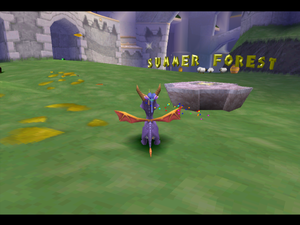 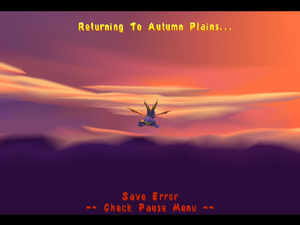 Like other versions of Spyro 2 and 3, the skyboxes shown when on loading screens are stored separately from the individual level WADs. They don't always match the skyboxes used in the level portals or within the level, but for this build in particular it seems like most of the time they do match. There are a number of these skyboxes which differ from the final: 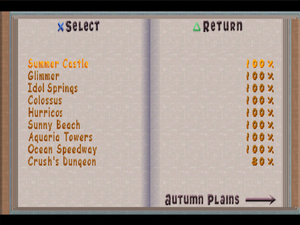 The Guidebook is perhaps one of the most noticeably incomplete parts of this version of the game. In addition to its clearly unfinished appearance, it features quite a number of quirks which make it unique.

The gem total across the entire game differs quite a bit from the final game, but on top of these placement differences, there are some differing gem totals.

Presumably due to the presence of a ? jar in Zephyr which awards a single gem to the player, the total number of gems for the level is 401 instead of 400. Evidently this is not intentional.

Additionally, the ? jar in Robotica Farms - which outputs purple (5) gems - seems to be missing two of the gems it's supposed to spit out, as the timing between each of the gems that are released is irregular. The level has a total of 390 gems in this version, and these missing gems are expected to be the result of this discrepancy.

On top of these quirks, Moneybags still charges the player 4100 gems over the course of the game, but does not return the gems to the player at the end of the game. As such, the player's gem count is permanently lowered by however many gems Moneybags has taken from the player.

The guidebook totals still indicate that each of the 25 levels with gems in them should contain 400 gems, matching the final game. Furthermore, using the cheat code which maxes out the collectable totals directly sets the total gem count to 10000, further pointing to the clearly intended total gem count.

However, the introduction of the cheat is also where things get sinister. Despite the cheat setting the total to 10000, this does not always reflect the actual number of gems marked as collected in each level. The cheat manually sets the total collected gems in each of the first 25 levels to 400, which would certainly total 10000, but the kicker is that two of those levels are levels without gems in them at all - Crush's Dungeon and Gulp's Overlook. Furthermore, the last two levels with gems in them - Robotica Farms and Metropolis - are untouched by the cheat, so the true number of gems in the player's total after using the cheat is 10000 plus however many gems are collected in those last two levels (minus how many gems Moneybags has taken from the player, if necessary).

Using the cheat will also bump the guidebook percentages for Crush's Dungeon and Gulp's Overlook from 0% to 80%, due to the additional gems. Without using the cheats, the levels can never go above 0% completion under normal means, in this version.

When the console is reset and the game is loaded, the total gem count is recalculated using the number of gems collected in each level. As such, the gem count will not stay at 10000 and will change once the game is reloaded. More precisely, the gems in each level are added up and the amount paid to Moneybags is removed.

Due to a glitch, exiting and reloading the game will appear to increase the player's gem, orb and talisman counts to quantities far higher than they're intended to be. This seems to be because the gem and orb totals are not reset to 0 when the game is exited, and so when recalculating the counts, the total gems and orbs collected are added to the existing stored amounts, effectively doubling the totals. As the actual orbs and gems collected per-level are not affected (only the total variables are) and the totals are reset to 0 after a console restart, these higher totals will not persist should the player save the game and restart the console.

As a result of these complicated dynamics, there are a number of different ways of interpreting the total gem count of this version.

The entrance to Dragon Shores does not look at the total gem count, but rather totals up the number of gems collected across all levels. As 9991 gems are collectable under normal means, the player does not have enough gems to enter the level without using the cheat. Amusingly, this also means that hypothetically the player can collect as few gems as possible in Robotica Farms and Metropolis, assuming they have enough orbs across the two levels, and still enter Dragon Shores after using the cheat.

One final quirk of the gem count calculation comes as a result of the cheat code which unlocks all of Spyro's abilities. The cheat also marks each of the instances of Moneybags where he offers to teach Spyro a new ability as paid for, and as such, quitting the game and reloading will subtract the sum of those gem requirements from Spyro's actual total. Since this can be used regardless of how many gems Spyro has, this can result in the gem count becoming negative, which causes some interesting graphical glitches in the HUD. In the final game, the cheat code does not result in any gems being taken from Spyro's total, even though those instances of Moneybags still disappear.

Similarly to the discrepancies in the gem totals, there's quite a number of ways in which the orb totals don't quite add up, like they do in the final.

First off, there's an additional orb in Autumn Plains that was entirely removed in the final game. This results in the final orb count being 65 rather than the final's 64. The orb in question is the one at the top of the castle, though both this orb and the one on the castle wall are registered in the Atlas. The orb on the island is not referenced at all by the guidebook text, and collecting the orb does not impact either the guidebook or the pause menu orb listings, due to both instances suggesting the level only has two orbs.

Additionally, there's a slight discrepancy in Robotica Farms - the orb obtained by clearing the tractor path incorrectly sets the 4th orb bit for the level, rather than the 3rd. As a result, despite the level being marked as having 3 orbs collected once they're all obtained, the guidebook does not recognise the third orb as being collected. This - along with the missing 10 gems - results in a maximum of 79% completion for the level. Furthermore, the guidebook text for that orb goes unused as a result - it reads "Exterminate Crow Bugs", due to the orb names being mismatched from the orbs themselves, in this version. The orb listing on the pause menu will also appear to show one orb as uncollected, due to this discrepancy. This does not adversely affect the total collected orbs calculation.

On top of this behaviour, there is an array listing the number of orbs present in each level, represented as a bitmask. The array is incorrect for a few levels and seems to reflect an earlier version of the game:

There are a few notable features of the array:

There's also an array which directly lists how many orbs appear in each level - this agrees with the above array. The cheat code uses the array of orb totals rather than the bitmask array, which results in a few extra steps of calculation, but causes no fundamental change in the end result.

The arrays contain a total of 60 orbs across the game instead of 64. However, when the max collectables cheat is used, like with the gems array, only the orbs of the first 25 levels are set, and they're set according to the array above. Unlike gems, rather than overwriting the number of gems for each level, the cheat takes the output of a bitwise OR between the collected orbs and the orbs array - this essentially means that collected orbs are not accidentally erased.

As a result the 3 Robotica Farms orbs and 4 Metropolis orbs are not set by the calculation, whereas the speedways and Autumn Plains variables are set slightly lower than is expected. This means that despite the cheat setting the orb total to 64, should the player input the code at the very beginning of the game and then restart the console, they'll find the total orb count has dropped to 53.

Collecting the orbs in the speedways, Autumn Plains, Robotica Farms and Metropolis will bump the count up to 65. That said, even if all of these orbs are skipped and the "real" count remains at 53, as the Gnorc in Dragon Shores only checks the total orb count when letting the player into the level, using the max collectables cheat will always be enough to get into Dragon Shores.

The cheats present in this version - like other Spyro prototypes - seem to largely be there for the sake of testing and QA. All can be activated using button inputs in the pause menu.

This cheat gives the player permanent invincibility, until the cheat is disabled. The code is not present in the final game.

This cheat unlocks the swimming, climbing and headbash abilities, and matches the code used in the final game.

One of the cheats sets the orb and gem totals to their maximum of 64 and 10000 respectively, also allowing access to Dragon Shores.

The specific process by which is is achieved has some interesting quirks to it, however. Essentially, the cheat performs the following for the first 25 levels:

The cheat then sets the total gems and orb counts to 10000 and 64 respectively.

There's a few reasons why this cheat behaves in unusual ways:

The total orb and gem values will re-calculate themselves after a console restart, and so performing this procedure will change the number of orbs and gems to match what is in the orb and gem arrays - e.g. if a player uses the cheat at the beginning of the game, saves, and restarts, they'll find that they have 10000 gems and 53 orbs.

See the "Gem Totals" and "Orb Totals" sections above for more information on gems and orbs and the effects of this cheat code.

A cheat code which appears to be intended for activating the credits is present, despite the credits not being present at this stage. This is presumably a leftover from Spyro 1. Using the code causes the game to crash.

The code also differs slightly from the one in the final:

The big head mode, flat mode, alternate Spyro colours and extra hit point cheats are not present at this stage of development.

The save file icon used in this version matches the one used in the final version of Spyro 1.

Dongle protection is present in this build, which can stop the game from running on real hardware and certain emulators. There's an unseen string which corresponds to what save data would be present in the dongle:

The dongle protection can be bypassed using a patch, or by setting the int at address 0x80011AF0 to zero.