A later build than April 13 build, and very similar to the unreleased prototype, though it still has some differences. The ROM has a timestamp of May 18, 1992, and is in English, unlike the earlier April 13 build.

The build is actually split into two files: kart_01, which is the base ROM, containing the game's main code and assets, and kart_02, which contains data related to the debug menus. To get the build working, append kart_02 to the end of kart_01 and then apply this patch.

Changes between this and earlier build 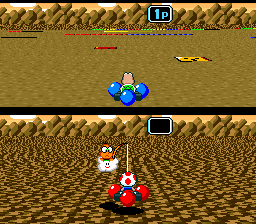 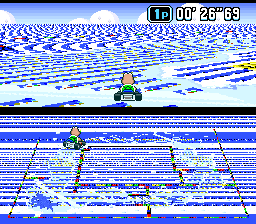 An extensive Debug Menu can be accessed on the titlescreen by pressing Start + Select. Accessing it will also enable Debug Mode in a race/battle that features numerous input commands and debug features such as a RAM viewer and item debugger. The Debug Menu itself inlcudes various tools like course editor tools and sound tests. Due to Debug Mode been made for the Japanese version of the game, some menu options on the main menu got corrupt Japanese characters, because the Japanese tileset been removed from this build. Furthermore, upon activating the main debug menu (Start + Select) starting any course will load course configurations such as AI checkpoints and objects from SRAM instead of the Rom itself (which can crash the game when not configured properly).

The earlier April 13 build has much more title screen commands compared to this build.

Start + Select + B + Y: Soft Reset back to the title screen (can be used everywhere).

Like the earlier April Proto there are several unique endings for ranking in the top 3 with two of them getting removed in the final.

Some changes were made. The unique 2nd and 3rd place ending cutscenes have been swapped around and have small changes in the animation.

Retrieved from "https://tcrf.net/index.php?title=Proto:Super_Mario_Kart/kart_*&oldid=1221482"
Categories:
Cleanup > To do
Cleanup > Works In Progress
Subpages