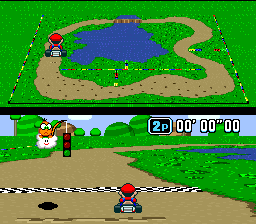 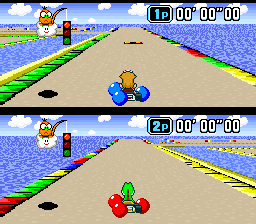 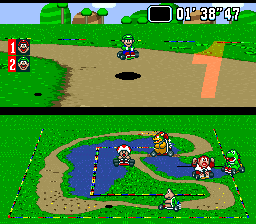 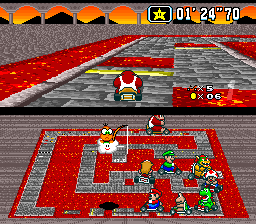 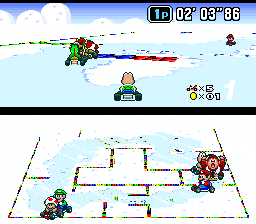 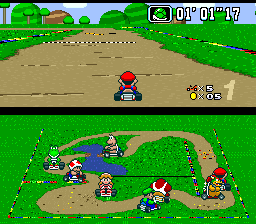 An example of swerving AI in Donut Plains 2, with Peach, Luigi and D.K. Jr. cutting off-road and Bowser going too fast on the last turn. 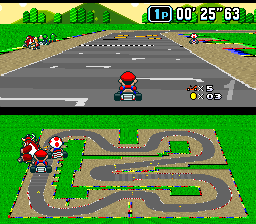 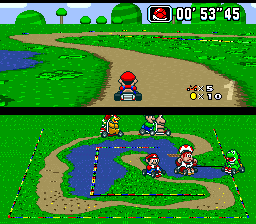 An example of the AI struggling in Donut Plains 3, with Yoshi stuck out of bounds, and D.K. Jr. and toad in the water, a result of the misplaced target point.

The tracks are in a different order than the final game and the later prototypes, and some have different layouts. Notably, this build lacks Rainbow Road, instead having a third Choco Island course.

Also, Luigi uses his own body graphics, whereas in the final, he uses Mario's body graphics as a way to save memory. His seat is also blue and his shading looks partially unfinished.

Peach and Donkey Kong Jr.'s ranking icons were redrawn. With Peach having a narrower face than the final.

Donkey Kong Jr. is missing the letter on his shirt during the Award Ceremony and the shading and pixel placement was slightly tweaked.

Before getting the first item, The item slot will display the player number. In the proto there is a "P" for player added next to the number.

The yellow reverse flag was missing the X and some pixels were moved.

The edge of the flag was changed slightly.

Cheep Cheeps flop upside down in the proto.

Mario’s mouth is closed on the prototype title screen. Aside from that, it's pretty much identical to the final Japanese version.

Everyone except Mario, Yoshi, and Toad was rearranged.

An orange border and a heading with the selected cc class was later added to the Cup selection. All trophies are obtained from the start.

Start + Select + B + Y: Soft Reset back to the title screen (can be used everywhere).

Press Select and one of the following buttons on the title screen to access a debug feature:

Loads a track selection screen. It uses a variant of the Time Trial one and Mario is set by default as the character for the player. If the player didn't access the driver select menu in Time Trial before (using the main menu), the selected track crashes as soon Lakitu's countdown finishes or when one of the players starts to accelerate (it may glitch and allow another player to participate).

If Battle Mode was accessed before, the game will send you to the battle arena selection instead.

Starts a Match Race with the last selected drivers and track, if Match Race was selected before. If Battle Mode was played before, it will start a battle.

By default it will start a glitched 2P Grand Prix on Mario Circuit 3 that makes the game crash when it finishes, with Mario (Player 1) and Luigi for (Player 2) and no computer players. The players have 0 lives and screen is almost blackened because the game is put in a "game over" state, but the players can move and they are visible on opposite screens (Mario appears on Luigi's screen and vice versa). Quitting the race triggers a Game Over. 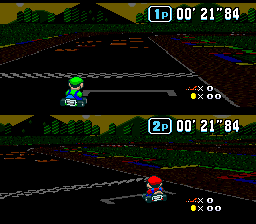 Any other mode that was selected before will crash the game or start a 1-Player solo race that crashes the game as soon the start countdown finishes.

Crashes the game. According to kart-init.asm from the source, this is supposed to open up EDIT1, which is the checkpoint data editor.

Starts a Grand Prix with the last selected driver and cup. The Mushroom Cup with Mario set as Player 1 will load by default.

If Battle Mode was played before, it will start with a glitched battle on the first track of the last selected Cup. The players appear to have no balloons, their speed is faster than normal, and laps don't work. When the battle is completed and you go to the driver or track selection, everything will be set back to normal Battle Mode.

If Match Race was the last choice, the game will crash.

After the screen becomes black, the game softlocks or crashes. In the earlier uncompiled Feb proto, it will open up EDIT2, which is the object overlay editor.

Crashes as well. In later prototype builds it will load a Debug Menu.

Any other button combination won't do anything.

A coin sprite with graphics for different distances can be found among the item graphics. This could mean that the coins were originally supposed to be standing on the track rather than laying flat, an idea that would be revisited in Mario Kart 7 and 8.

It's also most likely a leftover from the scrapped Coin Runners mode and other modes found in the November 1991 prototype.

The coin graphic used for the coin collecting animation can be found among Lakitu's graphics.

A full small font found among the Item Storage and the Race Time numbers, most likely used for debugging purposes and such. The first row can still be found in the final.

Retrieved from "https://tcrf.net/index.php?title=Proto:Super_Mario_Kart/mkart&oldid=1286558"
Categories:
Cleanup > To do
Cleanup > Works In Progress
Subpages