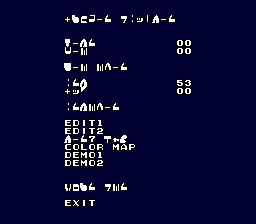 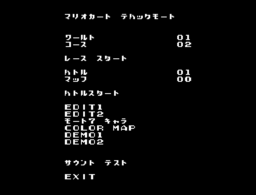 This Debug Menu can be found in the May build, mario-kart-* build, and the kart-d build as well as the uncompiled Feb build, and possibly more prototypes (investigation needed). It can be accessed by pressing Start + Select on the title screen.

The kart-d build includes the debug menu, but is inaccessible without hex editing. To access it, open the ROM in a hex editor, and go to offset 0x80000, and insert the first 0x8000 bytes from kimura/kart/risc/bin/editchar.bin, and save the ROM. The Select + Start combo should now work and the menu should load.

The katakana on this menu does not use any dakutens or handakutens, however they can be implied when translating. For verification, check kimura/kart/risc/join/edit_data.asm.

Start a Grand Prix or a Match Race (depends on what was selected before on the title screen), based on the cup and race number given by options 1 and 2 (shown below).

The Grand Prix/Match Race will be in a Debug Mode. The race starts instantly (even before the countdown) and there are debug tools and commands accessible by pressing a certain button combination:

More on that below.

Starts a battle (requires you to select Battle Mode on the title screen before to prevent it from crashing). 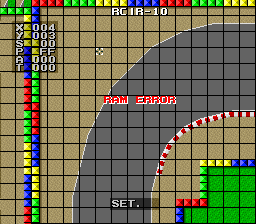 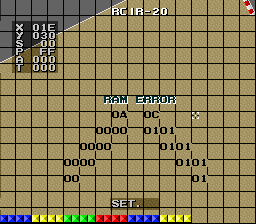 Unused Area forms 0A and 0C.

Editor for the AI zones as well as AI target/respawn points. It loads the selected track in the 5th option (マッフ) in a top-down view. It's also gridded. RAM ERROR is displayed on the screen if SRAM does not contain valid data.

There are also coordinates on the top left.

When pressing Select, you can shuffle through 3 options: SET., CODE and PONT.

Puts down numbers and letters by pressing Y that increase in 2 increments (00 - 0C). These are used to create AI zones. Putting one down and pressing B on it will increase it, pressing Y will decrease it. These numbers determine what form the zone will get.
Number that determines the form:

Puts down target location and respawn points by pressing B (it also makes a coin sound). They are shown in the form of wall part. Pressing X on a square will change its color that determines the speed configuration of that checkpoint.
The color determines the speed:

Hovering over one of these blocks will set the values of S and P in the top-left window. S is the speed setting of the current target block, and P is the AI zone number that the target corresponds to.

Pressing R will reveal some other options that can be shuffled through by pressing Up and Down: 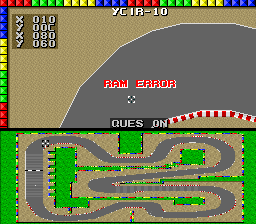 Loads an editor for placing the objects like Itemfields, Coins, Zippers and more. 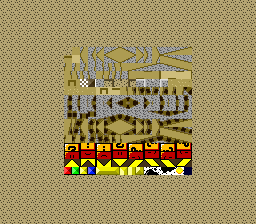 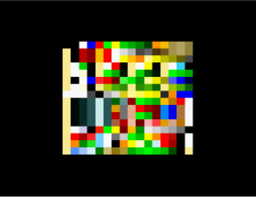 Color Palette Viewer. Static, and buggy. Currently unknown whether there is any control over this option. 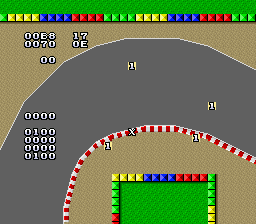 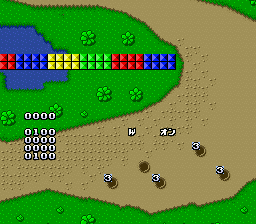 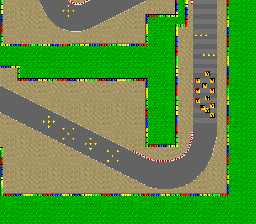 Appearence in kart-d with zooming function.

Loads a viewer in a top down view of the track selected in the Course and World value. The track's specific objects like pipes, thwomps, moles etc. and also Match Race objects like the Chain Chomps and the Bananas can also be viewed and edited. They will be displayed in the form of numbers while the number determines which kind of object and to which visibility area it belongs. It doesn't seem to be possible to save new edits however (Investigation needed).

Depending on which mode was accessed before, overlay objects like item fields can be displayed as well (Time Trial for example will remove them).

At the top-left are the coordinates and the currently placable object. The numbers at the middle-left side appear to be Mode7 values of how the track is zoomed and placed.

This editor has some differences in some builds:

Pressing Select will remove the coordinates and the cursor.
Holding R will display the letter R and pressing B then will load the objects for the track. Holding L displays a W and pressing B then will display some garbaged tiles for a short moment (possible for saving?). Replacing the font with the Japanese font type will fix the garbaged tiles (shown right). (Translation needed). 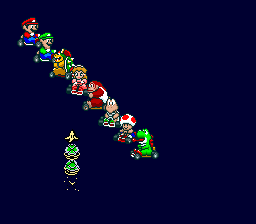 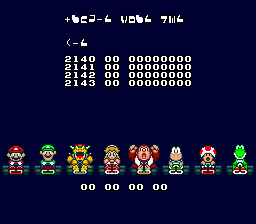 Completely unfunctional. Routine that is activated by this does not check controller inputs, and does nothing except return. 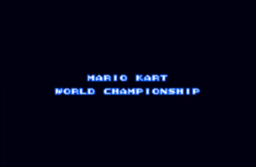 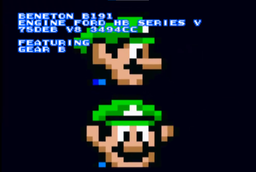 Video footage of this in action can be found here. 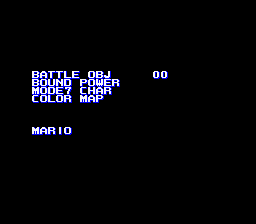 There are three other options in this menu that don't seem to appear in later prototypes:

BATTLE OBJ: Value is supposed to be bounded between 00 and 01, however due to unclean RAM it will sometimes start with a different value.

As of the time of this release, the "Gate Battle" was not properly implemented, so it is inaccessible by normal means.

BOUND POWER: Represents the power at which objects are knocked back by collisions. 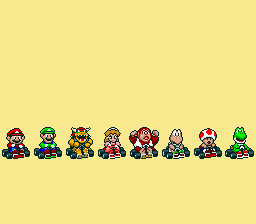 "MARIO": This option will load up a screen with all 8 characters' sprites loaded up at a skewed angle. Unsure at the time if anything else is supposed to happen on this screen. 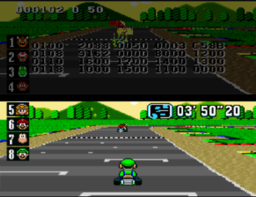 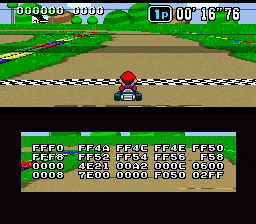 Appearance in the May proto. All debug commands enabled at once.

This mode is currently accessible in the Nov'91 prototype, May prototype, and the kart-d build.

Version 1 includes a full page of RAM viewing, with 4 groups of 8 bytes each. This version is accessed by pressing L+R+Down+Select (L+R+Select in kart-d). The selected nybble will flash, and you can move around the cursor with the D-Pad. Pressing A will increment the current nybble, and pressing Y will decrement the current nybble. The accessible area is from address $7E:0000 to $7E:FFFF, so the upper area of WRAM is not accessible.

In the May build, it is required to start the race from the Debug Menu to get access to the RAM Viewer with the button combination. And you can only move the cursor when pausing the game.

This mode is currently accessible in the Nov'91, February, May prototypes and the kart-d build. This can briefly be seen on a Japanese Promotional video.
The left chunk shows a 24-bit address which can be adjusted to anywhere in the SNES's 24-bit address space. The right chunk shows the values at that address.
To control this version, L and R move the cursor left and right respectively, A increments the selected nybble, and Y decrements the selected nybble.

In the May build, it is required to start the race from the Debug Menu to get access to the Mini RAM Viewer with the button combination.