This sub-page details all the levels of World 5.

This level is very similar to the final release of World 5-1. The layout of the first part is a bit more plain-looking, though the Thunder Lakitu is still present, and there's still plenty of enemies and obstacles to overcome.

The second part of the level is also within a cave, but the cave is completely different from the final. The cave has to be scaled more vertically than the final, and is devoid of the frozen theme in general, including the icicles. Just like the first part, though, there's plenty of various kinds of enemies in the cave, including the cannon enemy from World 2-6.

The third part of the level is where the snow comes in, like in the final version. Yoshi moves slower in the snow in the prototype than he does in the final. There are no Bumpty enemies yet, though there are a bunch of Shy Guys hidden beneath all of the trees.

The overall layout to the third part of the level is also very different. It's more hilly and features bouncy balls. The hills are oddly fragmented and look unnatural, while the balls had to be put up on blocks so the player could see them. 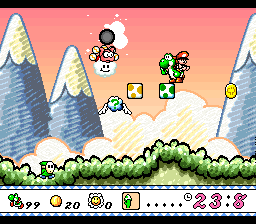 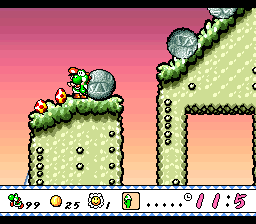 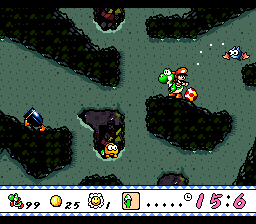 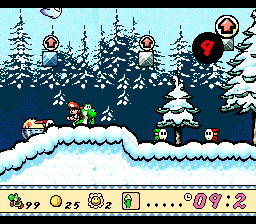 The upper level features a lot of generic platforms with balloons that will drop missiles on Yoshi. At the end of the line of platforms comes a bunch of walls of sand chock-full of enemies, coins, and flowers. Oh, and the balloons with missiles are still present. There are platforms underneath the sand walls in case they are completely compromised and there's nothing else to stand on. Once the player reaches the end of the sand wall portion, they are forced to make their way down to the end of the level by either ground-pounding through more sand, or by standing on falling square rocks.

The lower portion of the level features MORE platforms, falling square rocks, and balloons with missiles. The main difference is instead of the sand wall, there's a bunch of tiny planets with Raven enemies on them (hence the picture of the level). The Ravens have an odd hitbox - they can be stood on, if Yoshi is standing on its planet, the Raven can just walk through Yoshi, but they also harm Yoshi if interacted with a certain way. After a ton of falling square rocks, the player has to make their way up to the goal by climbing on an obscene amount of Raven planets. 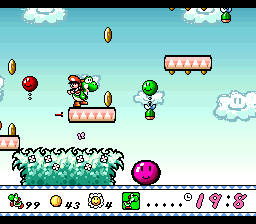 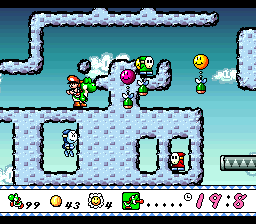 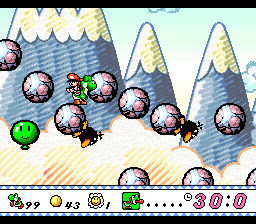 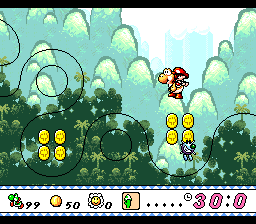 This level starts out kind of weird at first, completely lacking the final's Shark Chomp chases entirely. Instead, Yoshi starts out on a small island with a barred door, and hovering around the island are a ton of timed platforms. After hopping on timed platforms for a little bit, the player will find one of two doors on a platform up high, all by itself. Going into this door leads the player back to the beginning of the level, with Yoshi exiting the barred door that was there. After a bit more hunting around on the timed platforms, the player will find a path that leads up higher. They will encounter a small sand wall with a Snifit (with slightly glitched graphics), and then more timed platforms. The platforms lead to a new island with a middle ring and another door on it.

The second room of the level is much more similar to the final, featuring a long line of platforms on paths in which enemies need to be avoided. At the end is a sand wall with more Snifits, Tip Taps, and a ? cloud that contains a door.

The door leads to the third part of the level, which very suddenly changes the setting to that of a fort, as in the final. This third part of the level is a pathway full of enemies in which a key needs to be obtained to unlock the door at the end. Potted Spiked Fun Guys and a Wild Ptooie Piranha fill this area. Unsurprisingly, the final's bonus room is absent here.

Upon entering the door at the end of the level, one would expect a boss because of the room they enter. However, there is no boss, only the end goal. 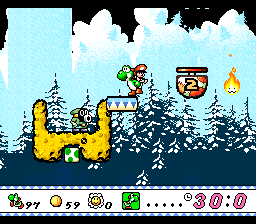 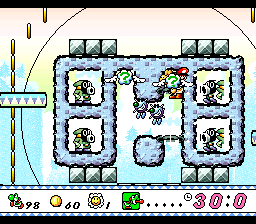 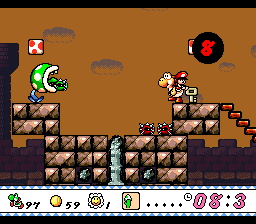 This level is essentially the auto-scrolling portion of the final version of World 5-6. It lacks variety, though. The level uses the same group of enemies (balloons carrying Needlenoses, Gusties, Shy Guys, Piranha Plants, and one Cactus Jack) throughout instead of having them change as the level progresses. The only platforms Yoshi ever walks on is the large clouds - it doesn't get changed up like in the final version.

As one would suspect based on the image for the level, this is actually a prototype of the final version of World 5-2. There are a couple problems right upfront. The Chomp Rock that the level provides (not a snowball) cannot obtain enough momentum from Yoshi to get pushed up the hill, because Yoshi both has a lower top speed and walks slower in the prototype. Since the rock cannot get enough momentum, the jumping Tip Taps that are waiting to get run over, can't get run over. This makes progressing pass them needlessly difficult.

If the player can manage getting past the hill, they will find the ski lifts. There's no intermediate pipe leading up to it. The ski lift portion is very similar to the final, with the marked difference of having Ravens walking around a sand wall half way through the section. The player will have to pick up a fire melon in one of the ? clouds in order to melt the ice blocks in front of the door leading to the next part of the level.

The next part of the level does not have any more ski lifts like the final version. Instead, the player is led to an area with a starlit sky, where there's a wall every few feet. The player has to dodge enemies while melting the ice blocks below each wall in order to progress. After getting through the walls, there's a pond with a fish that shoots water. The ? cloud above it will spawn some red steps for Yoshi to get across (there's a chance they will glitch and not actually spawn. This is reminiscent of the beginning of World 5-3 in the final release. After that, there's a bit of jumping between gaps and dodging enemies, and then there's a section full of ice blocks. At the end is an ice block that holds a key. When this ice block with the key is unfrozen, a locked door also appears with it.

Entering the door leads Yoshi to a snow field where it's actually snowing. The snow has problems with triggering a gradual increase/decrease, and it glitches out the screen after passing the goal ring. After getting past the snow field, the level starts to look more like the final version of World 5-2 after its middle ring, all the way to the goal. 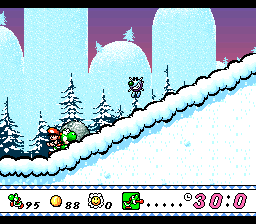 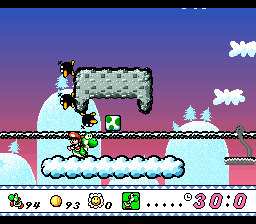 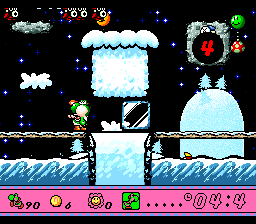 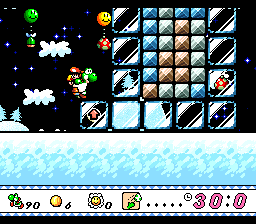 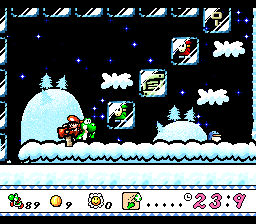 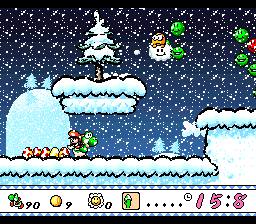 The prototype sends Yoshi to the cave that is seen in World 5-1 in the final version, with the icicles and frozen water with Shy Guys in them and everything. There are some slight differences, like how the prototype added Slime enemies to the cave. The exit to the cave is a door blocked by ice blocks instead of a pipe (in case you haven't gotten enough ice blocks yet). After the cave is a lovely meadow that doesn't have snow, but is packed so full of Goonies that it can make the game lag. 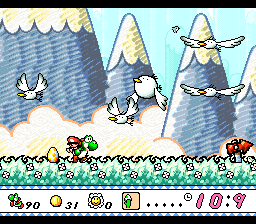 The first part of this level features a field with Goonies and Bumpties. The egg spawning plants are also here, but they passively shoot bubbles instead of eggs. After a while the player comes up on several platforms linked together by stairs, filled with Ravens and Bumpties crawling about. Off to the right of the platforms is a wall that makes up part of the fort. The fort has an entrance at the top, but the player needs to break through the rocks and get past the cannon enemies in order to get to it, and then they still need a key for the door.

The Mole transformation makes an appearance on one of these platforms, but what the player has to do with it is not immediately obvious. They have to drop off of this platform and scale down the side of the nearby cliff down to a door that's tucked away into the ground a bit. This door leads to an passage that leads under the fort. Under the fort is a bunch of cannon enemies that are guarding the key in a ? cloud in the very back. The player has to get the key and get back to the front of the fort.

The inside of the fort does not resemble the final version of the fort very much. The fort is one large room that consists of enemies including Bumpties and Slugs among others. There is a large amount of small, square sand walls with Ravens on them, as if these are acting as placeholders for their planets. There is a tunnel at the top that's meant to be traversed by another Mole transformation of Yoshi in order to get to a flower. The pipe that leads to the next part of the fort spawns Yoshi slightly out of bounds, causing Yoshi to get stuck and take damage and until Baby Mario gets taken away. Using Free Movement, the player can get unstuck. While this is going on, there's a Raven walking on an invisible planet. The room doesn't have any more progression, so this Raven must be a placeholder for the boss that's supposed to man this fort. Level is unwinnable. 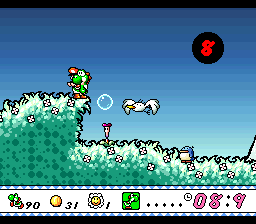 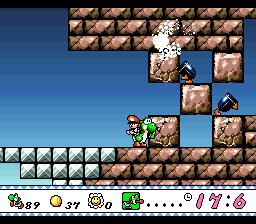 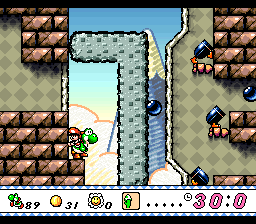 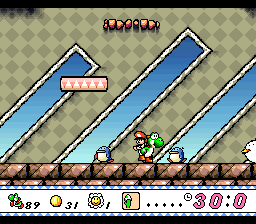 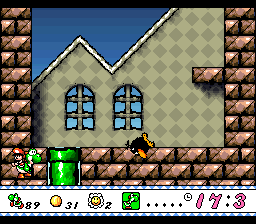