This is a sub-page of Proto:X-Men 2: Clone Wars.

The game name is named "X-Men 2: The Bio Wars" in this build. It is missing the trademark symbol and the "Developed by Headgames, Inc." string at the bottom. The screen is a bit taller in the final, shifting the bottom stuff down. The X-Men logo is also a bit lower than in the final game.

The character select is also in this build, but with placeholder icons used instead. Magneto is also available at all times. 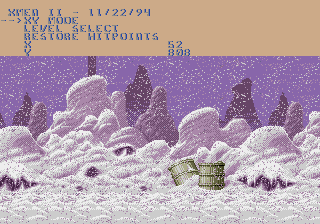 The debug menu is mostly gone at this point, even though this build is only six days after the previous one. It can be accessed by pausing the game and pressing A. Only the movement mode, the level select and restore health functions are left.