Escape from Mars - Starring Taz is about Taz the Tasmanian Devil being abducted by Marvin the Martian and he must eat and spin his way back home to Earth while going to different planets on the way. It's also the sequel to Taz-Mania.

Hold down the A and the B buttons on the first controller, as well as the B and C buttons on the second controller, when the Sega logo animation plays. A barking sound will play. Afterward, begin the game and press Start, then A. 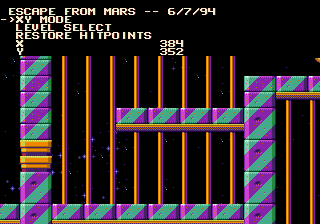 Below the menu is the player's current position in the level.