In Looney Tunes: Sheep Raider, Daffy Duck presents a reality show in which the contestant attempts to steal an entire flock of sheep using nothing but wits and the sponsor’s amazing products. Sponsored by Acme, of course.

In plain words, it’s a stealth puzzle platformer, and it has a level skip cheat code for a reason.

The US version includes all text and sound assets of the entire Italian, German and Dutch dubs, accessible only in the European version. Interestingly, Brazilian Portuguese is the only available language across both versions that isn’t dubbed - its sound data is an exact copy of the English dub. The Windows version of the game, released a bit later, did include full voicing for the Brazilian Portuguese version, probably meaning that it wasn’t finished in time to make it into the PlayStation release. This is corroborated by the fact that the wording in the dub differs slightly from the subtitles present here.

LEV02.MLT includes the text of the two demo-only signs in French and in English. In the other languages, the first sign remains untranslated in English, while the second one is missing entirely.

Quite a few! First, the copyright line under the Warner Bros logo is slightly different:

Who grew up with the US version most certainly remembers the odd intro of Black Sheep Productions: crudely-drawn white sheep happily skip a fence one after another while a bird flies back and forth and someone hums a tune. A black sheep then appears, stops, looks at the viewer and… the film is ripped right off the projector with a grinding noise. One may be surprised to learn that was, indeed, a censorship measure: the projector gone awry cuts the film just short of the black sheep pulling a gun and shooting the bird dead.

The game logo is also obviously different to accomodate the title variation on both sides of the Atlantic – but oddly enough, the EU version always displays the British title, even though different game covers with localised titles were used in Spain, Italy and France. Besides that, the picture that accompanies the title was completely redone for the American release.

Despite including all data for the Italian, German and Dutch localisations, the US version allows only for majority languages of the Americas, using the United States flag for English and the Québec flag for French. The Brazilian Portuguese localisation is the only one exclusive to the US version, and it is not present in the European release’s game data.

The loading screens for the levels are completely different across both regions: while the PAL release has a closeup on the inventory map being held by Ralph’s greasy mitts with an illustration of the level’s environment visible on the background, the NTSC version opted for the same shot of Ralph’s workshop for every level with the level-specific illustration relegated to a blurry polaroid on the background, but with an illustration that sometimes hints at how to solve the level in place of the map. The font has also been changed from the ever-present Comic Sans to a more sober grotesque. Finally, the cutscene loading screen of the European release shows blueprints of the cannon elbow, robot, fishing rod and catapult taken from the game’s concept art bonus files (oddly without compensating for the squishing discussed below), while the American release has a hodge-podge of elements of some of its other loading screens.

On Level 2, the fan and Lady Sheep items are inexplicably swapped in the inventory of the NTSC release. The demo predictably uses the same order as the PAL release.

In all but two levels of the game, there is a secret time clock that awards the player a point if activated. These points can be traded for prizes in the overworld, either in the form of tips for finding the two secret levels or in the form of image galleries that include concept art and pictures of the developers posing for Infogrames Police Dept. mugshots for humorous faux criminal charges. One of them is Yohann dos Santos Monteiro (credited with object coding), charged for being a “FLYING ASS”. Since winged equines are taboo in America, someone drew a crude X on top of the offending word (and also removed the letter G from “FLYING” for good measure). In the censoring process, the image also lost a bit of dithering for reasons unknown.

It may also be worth noting that, despite this instance of censorship, there was no intervention on Nadège de Bergevin’s charge of “F★?@✱¶G PRODUCER”.

(Sidenote: all developer mugshots appear squished on the raw TIM files, but they were made like that because the higher resolution areas of the game, which includes the picture galleries, are internally rendered at 560 × 576 px PAL or 560 × 480 px NTSC and then stretched horizontally to fit the respective standard. The slight difference in aspect ratio between PAL and NTSC is compensated by letterboxing.)

Finally, the American release’s credits have one additional screen for the US version personnel, accompanied by animations of Ralph and an instant Martian running in place. 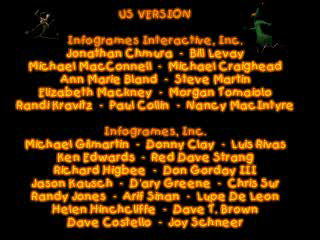