Daffy Duck: The Marvin Missions takes many cues from the famous "Duck Dodgers" shorts, so much so that it's pretty baffling why they didn't just call the game Duck Dodgers.

What appears to be a dedicated sprite for jumping, separate from using the jetpack. While both are a thing in the SNES version, this was streamlined to just the latter in this game.

A bunch of tiles depicting blinking and feet-tapping. Daffy doesn't have any idle animations in the final game.

Only one sprite of Marvin on his hover-scooter is used when he appears as the Stage 1 Boss and in the chase sequences of Stages 2 and 3, leaving these others unused.

Graphics for a full run cycle exist for the little Instant Martians, but only two of the frames are used in-game.

A bunch of unused frames for the boss moving around.

There also seems to be a second frame for its movement during the second phase of the battle.

Tiles are present that would have given this boss an animation while moving around. It just glides around in the game proper.

An unused in-between frame for the boss's projectile attack at the start of the battle.

It is possible this Super Game Boy border was going to be used at the last battle, since that is where Marvin's telescope is located. However the default border is used. Game Genie code 081-C8F-C42 or GameShark code 010808D0 will load this border at startup. 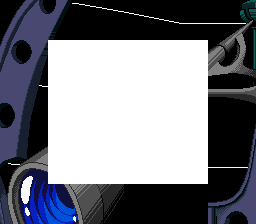 A background was added to the title screen for the Super Game Boy release.

Many enemies were removed from the fifth room of the first level, making some of them completely unused in the Super Game Boy version.

A cannon was removed.

On the Super Game Boy version, if you move left at full walking speed and then press Right + B on the next frame, Daffy's health will be increased by about 64 units, making the health bar glitch out. This does not work on the Game Boy version.

On the Game Boy version, Select can unpause the game and pressing Select + Start during the staff roll resets the game. This does not work on the Super Game Boy version.

On the Game Boy version, only one breakable tile can be cleared at a time; if you try to shoot many tiles at once, the shots won't be registered. This was fixed in the Super Game Boy version.

These sound effects are not used anywhere in the game.

You gain one point for each enemy or object you kill, displayed as the "score" on the bottom of the screen. On the pause screen, pressing certain buttons will convert those points into something useful. In boss battles, only the last two codes can be used.

Although the jetpack refill code converts the same 10 points as other cheats, it can't be used if you have less than 20 points.

This game has a hidden hard mode which can be accessed by stepping on the cart right at the beginning of the first level. This makes Daffy acquire a lot of speed as long as he doesn't touch the ground. If you manage to reach the end of the room at high speed (a feat in itself), instead of loading the next room, the game will show a black screen with the text "Super stage" and you can play through a new set of levels. These levels are almost impossible to be beaten by a human player due to their ridiculous design requiring constant nearly frame-perfect use and timing of jet pack fuel.

Hard Mode has its exclusive cheat code that will convert 10 points into a refill of your jetpack by pressing A twice on the pause screen. On some levels, the cost becomes ALL your points.

For this mode you are given 100 points as well as 9 lives instead of only 2, making this mode somewhat more feasible to complete.

Losing all your lives will reset the game instead of bringing up the game-over screen.

Enemies Only Appearing in Hard Mode

This enemy can't be landed on and has 20 HP. It chases Daffy at very low speed but will dash at him when hit (while puffing itself up). Appears in Levels 2 and 4.

This enemy also chases Daffy, but can be killed in one jump. Appears in Level 2.

This sprite appears in a dead-end in Level 2 and will trigger an enemy to drop down behind Daffy when it is shot.

This enemy appears in Level 4 and rushes forward after a few seconds.