Wile E. Coyote's Revenge was supposed to be the sequel to Road Runner's Death Valley Rally, until Software Creations realized that their Acme® SNES Development Kit wasn't as reliable as they hoped.

SNES Central features a retrospective on the game's development by producer Rene Boutin. 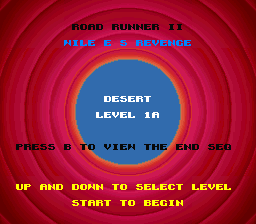 At the copyright screen, as the yellow "WILE E COYOTES REVENGE" letters begin leaving hold A + B + X + Y + Select + Left (you may need to stretch out a bit for this one).

The level select screen allows you to play any of the available levels, though being a rough prototype most of the options cause the game to crash. Press B to see the unfinished and otherwise inaccessible end credits.