These graphics are exclusive to v0.04, or were first found in this version.

Found in the CharSet folder are the two bed sprites. In v0.04, the bed sprites that are used are only in ChipSet images. It's worth noting that this image matches up perfectly with the beds on the ChipSet for Madotsuki's room, 部屋チップ１.png.

Some stone blocks can be found in Puddle World's ChipSet, but they are not used anywhere.

Found in the ChipSet folder is a loose image of the tiles used for the dirt in the Barracks Settlement. It's most likely a leftover from before Kikiyama pasted the tiles into the respective ChipSet.

A similar image for The Wilderness tiles can be found in the Thumbs.db images with the same 64x32 dimensions under the name 砂浜64 32.png.

The elevator graphics used for the Mall in v0.10 exist in v0.04, but are never utilized. They are colored differently from its v0.10 counterpart.

The face of one of the ghosts found in Forest World, specifically the one with the pink mouth. The center of its mouth is darker, making it look like it has lips. This tile was removed by v0.06.

An alternate version of the Hat and Scarf effect where Madotsuki's braids are hidden. It was overwritten by Mafurako's visible form in v0.08.

A light graphic broken up into three rays. The shape suggests that it could have been used to show the shine on windows.

An image named どろどろ.png ("Sordid" or "Muddy") can be found in the ChipSet folder. It is not assigned to any tileset in RPG Maker 2003, and was deleted by v0.06.

It contains some reddish terrain, several poles, and the blood splatter that's found in other maps. The two typical gates are also present, showing that the map that would have used this ChipSet would have had connections to other worlds.

A mock-up map of how this ChipSet could have been used has been provided. 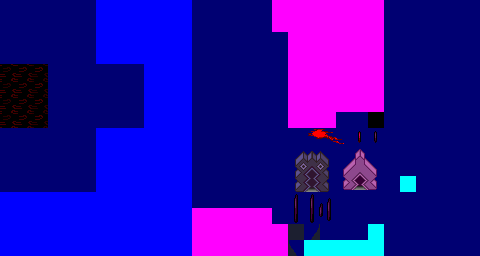 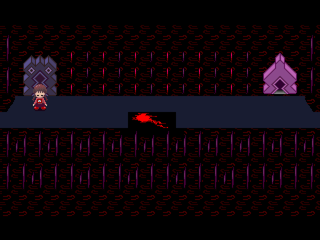 If this ChipSet is added into RPG Maker 2003, the red terrain is revealed to be an animated water tile.

Both the used and unused variants of the Submarine Fish from v0.10 have sprites in v0.04, but neither of them are used. Both of them lack shadows in v0.04, having a "chopped-off" appearance.

What appears to be an earlier version of the TV can be found on the same CharSet image as the TV that is used, along with an unfinished outline of the TV.

Just an ordinary vending machine, except in the CharSet folder. The vending machine sprite that is used is on ChipSets instead, however, none of them have the teal background found in this image.

The Will-o'-the-Wisp effect only has a mugshot in each of the other versions that have been found, but v0.04 finally allows us to see the sprites that would have been used with this effect. It appears that it would have been able to change colors. 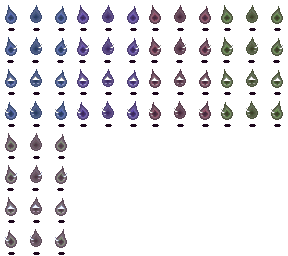 Version 0.04 has a lot of hidden images within its Thumbs.db files, offering a look at in-development graphics and ideas Kikiyama had for the game. Sadly, the quality of these images are very poor due to the nature of compression in Thumbs.db files.

Some of the timestamps on these images are from before v0.00 was released, with a few dating back all the way to early 2003.

These graphics are also still unused in v0.10, showing that Kikiyama was holding onto some assets from 2004 for possible future use.

The same sprites for the unused Blindfold effect are still here. The only differences are that the mugshot has a bluish background, and there are no wake-up sprites.

A mugshot for when Madotsuki is riding the desk chair exists, but can never be seen in-game. The scooting animation for sitting still in the chair is also unused in this version.

FC World Crick in the Neck

FC World sprites for when Madotsuki has this condition exist, like in v0.10, but are never used.

While some sprites of Greyscale Madotsuki are used in Mini Hell, the walking sprites and mugshot are never seen in-game, just like v0.10. Like all mugshots in v0.04, it has a bluish background instead of a black one.

The only remnant of the Will-o'-the-Wisp effect in later versions. Like all mugshots in v0.04, the background is blue instead of black.

A 16x16 square found in an FC World CharSet. It was probably used to measure FC World sprites.

The same unused colorations of Kinoko-san are also found in v0.04.

The same unused objects and tiles for Madotsuki's room are also present in v0.04. Some of them are alternate designs for objects that you collect effects from.

The friendly toriningen in the Mall has sprites for facing other directions, but it only ever faces forward.

The Eye Palm has graphics for facing left like the other arms, but this is never seen in-game. These frames remain in v0.10, but are still unused.

Some confetti can be found in Forest World's and Shield-Folk World's ChipSets. It still isn't used in later versions.

These tiles have a similar pattern to the floor tiles used in Hell, possibly making them in-progress versions of the tiles.

There are some additional tiles for the FC Goblin room, suggesting that the room could have had a different layout at some point.

Some kind of hole that is never used in the Mall.

This autotile is a recolor of what's used in Madotsuki's room, but is never seen in the Mall.

These tiles are likely placeholders. The circular tiles can be used to (kind of) make your own custom puddles.

The unused sewers graffiti is also in v0.04.

Some tiles that resemble tatami, a type of Japanese flooring.