So a thread about this proto was posted on NeoGAF. A user named Ishida listed a ton of little differences from the final game. A nice reference. --Rabidabid (talk) 22:54, 13 November 2016 (EST)

Hey! Thought I'd share some useful PAR codes and advice for breaking the game. I'll update as I find more.

I'd like to find a code to unlock free camera scrolling, as shown in the unused vertical boss door screenshots in the X3 page. I'm interested to see if the area above Blast Hornet's boss room has any content in it or not in the prototype. If anyone knows of such a code or any other method of actually viewing that area, let me know. It's obviously possible, since we have those screenshots! --Schyfis (talk) 01:58, 15 November 2016 (EST)

According to the MegaED X map editor, there is a very disappointing nothingness above Blast Hornet's boss room. Which just raises further questions as to what they had in mind for that door, if not for a way for Hornet himself to enter. (But then why does it respond to the player...?)
~ Doc Lithius (Info|Chat|Edits) 06:33, 15 November 2016 (EST)

Dang, that is indeed disappointing. It's also notable that the Blast Hornet refight in Doppler 3 also contains this door, which is incredibly weird. Why would they place a door there, when they already know you're going to be teleporting in? This is just speculation, but I think at one point it must have been planned not for X to enter the door, but for Blast Hornet to interact with it somehow. Perhaps it's a placeholder for some other object. Also of note is that I cannot enter this door through the same manner I described above. Getting into the room above the refight room and colliding with the door does nothing.
Speaking of the refights, I'm getting really weird results when I enter those teleport capsules. I'm not sure if I just got the game in some weird state, but I've had it teleport me to a broken Maoh fight from the intro stage, as well as to a glitched cutscene with Cain and Zero present. I think it has something to do with whether or not I leave the PAR code for Doppler 3 enabled.
Finally, I used my Y-value and room-changing codes to actually get into one of those empty rooms that some of the teleporters lead to. You get hit immediately when you teleport in, and at first I thought it was just because you teleport into a wall. This is not the case! There are actually two invisible objects in this room that will damage you. The first one is on the ceiling, near where you teleport in, and the second is directly below it on the floor. You can shoot both of them, but it doesn't appear to do anything. They appear to be two distinct objects, as I can shoot between them and the shot will pass through. It might be interesting to try other weapons on them, but I'm not sure how effective it'll be. Screenshot.
--Schyfis (talk) 16:34, 15 November 2016 (EST)

My guess is that it was indeed at one time an alternate entrance, almost certainly linked to a path starting at the spot on the building's roof where you get the health tank. Or, alternatively, that was the initial plan but they never followed through with it beyond having the shutter on the ceiling in the boss room.
Only other thought would be having it as an entrance for Hornet, but since most other square room X-series bosses just drop in by clipping through the ceiling it would seem odd to make him an exception.
--Sanpuruban (talk) 03:07, 16 November 2016 (EST)

Interestingly, I actually noticed that while this happens in Crush Crawfish's room, somehow his grabbing projectile can grab you through the ceiling and bring you back down. Probably the only fight in which you can escape from the ceiling. Rick (talk) 21:53, 18 November 2016 (EST)

So far we seem to be referring to the Doppler 'bots and Nightmare Police by their English names. Wouldn't it perhaps be more appropriate to use their Japanese names for future formal subpages in order to avoid confusion regarding how the bosses are named in this proto? --Sanpuruban (talk) 03:28, 16 November 2016 (EST)

I thought about that when I uploaded the first pictures for the article. Honestly, I've been using the English names out of pure convenience, but you make a good point. It may confuse some people who aren't familiar with both games. And since this is a Japanese ROM and all... It's probably okay to leave the names as their English versions for The Dumping Ground, since it's just that, though.
~ Doc Lithius (Info|Chat|Edits) 13:51, 16 November 2016 (EST)

So, there's text for a graphic viewer in the final version. I can't imagine this not being in this version too, especially four months before the game is released. If that's the case...there might be actual programming for it this time around! Anyone checked yet? Rick (talk) 21:55, 18 November 2016 (EST)

I haven't fully checked that yet, but what I can tell you is that the code for the map editor is completely gone from the sample ROM, even though the text for it is there at 0x3249E. It's been dummied out and replaced with a single RTS opcode. --GoldS (talk) 22:50, 18 November 2016 (EST) 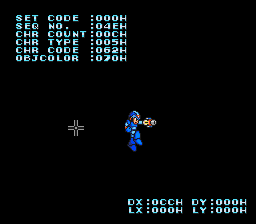 Nevermind, here it is. PAR code is 00887E01 + 00887FE1. It should start up after the Capcom logo. Note that the viewer is very glitched compared to the ones in Mega Man 7 and Mega Man & Bass and the game will crash if you try to view an object past B3. — The preceding unsigned comment was added by GoldS (talk) • (contribs)

You're right... That thing is glitchy as heck. Which is a real shame because I was hoping to see more of those weird pre-beta Vile sprites buried in his object set somewhere. Trouble is, the Object Viewer doesn't seem always seem to want to load all the right tiles all of the time. This results in kind of a scrambled mess for a lot of objects... I did learn one particularly fun thing though: Apparently, the Ride Armors all share the same body "sub-object" but swap out arms or sometimes legs. That's kinda neat.
I also learned it can outright crash ZSNES, if you're not careful. Heh heh.
~ Doc Lithius (Info|Chat|Edits) 02:36, 19 November 2016 (EST)

About that early Vile sprite...it's a completely different object than the actual Vile boss, and it's only used because both the ride armor (exploding) and Vile have to be on screen at the same time. Once the ride armor has finished its destruction sequence, the proper Vile graphics are loaded to VRAM and the placeholder Vile sprite is replaced. It's just that in the prototype, they forgot to update the placeholder graphic with the new Vile design, something that they remembered to do in the final game.

I managed to locate some values that change the camera locks. Editing these can push X through solid surfaces, allowing X to get to otherwise inaccessible areas.

Oh yeah... I kept meaning to mention that you can access the second half of alt. Doppler Stage 2 if you run through the normal stage, turn on the "access damaged Doppler Stage 2" code, then die. Since there's a checkpoint after the Mosquitos room, you end up spawning there in Vile's version of the stage.
But of course, there's probably a "checkpoint" value you can manipulate just as easily via patch code, so... whichever!
~ Doc Lithius (Info|Chat|Edits) 18:25, 19 November 2016 (EST)

vSNES will probably be good enough for examining most things, but just in case I've been working on a program to decompress the graphics. I'm still working on cleaning up the code for it, so in the meantime here's a BIN file with all the decompressed graphics (I padded each data to a multiple of $200 bytes and then added $400 bytes of padding afterwards for easy viewing). --DarkHunter (talk) 16:10, 19 November 2016 (EST)

Using this code, it's possible to access the latter half of the destroyed Doppler Stage 2B (PAR code 7E1FAE0E) unhindered, as well as the often-looked-for Press Disposer boss (!!) in Doppler Stage 1 (7E1FAE0A). The fact that setting it even higher in Doppler Stage 3 causes a cutscene to play makes me wonder if the epilogue and ending are hiding out somewhere. (They might be!)

I'm also unsure if any stage actually has a fourth checkpoint, but setting the value to 03 does spawn you in a void location in most stages. ~ Doc Lithius (Info|Chat|Edits) 21:08, 19 November 2016 (EST)

I filled in the missing values. Doppler 3 is a bit odd in that the only natural respawn point is in the capsule chamber, despite using all those values. You can even kill yourself before entering the capsule chamber and it will respawn you there (this was fixed in the final). The graphics for the epilogue cutscene are in the ROM (stored compressed), so perhaps there is a way to trigger it and the credits sequence. ----DarkHunter (talk) 01:18, 20 November 2016 (EST) 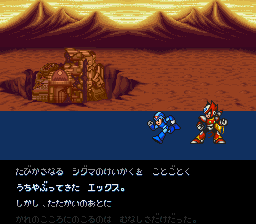 Found a hacky way to trigger the ending sequence: Activate PAR code 7E00D106 and start a new game. The ending will play automatically. A lot of differences in here, like the different mountains and laboratory in the epilogue, the background that's shifted up too high, the cast list that lasts about five seconds, etc.

Has anybody been able to determine anything from the jumbled, glitchy mess that appears when you destroy Buffalo's ice shots? After looking at them in-game, I am about 99% sure that they are fragments of an earlier design of Blizzard Buffalo. The part I can see of what appears to be his head doesn't look like it matches up with the version shown in EGM2, so it might have been used in a build from between those two versions. --Sanpuruban (talk) 02:16, 23 November 2016 (EST)

I just wanted to take a moment to thank everyone who's contributed, no matter how minor, to this page and its sub-pages. Seriously, you guys are awesome and I really appreciate what you've been up to since the very first edit!