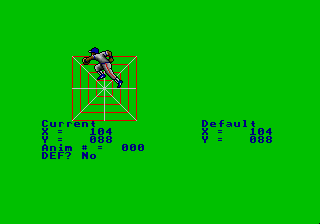 Go to the main menu and set "CONTINUE" to "YES", where the player will be sent to a password screen. Enter MOBAAAAAAAAA on this screen and press A to see the above screen. Pressing Left or Up will go back by one frame, while Right and Down will go up by one frame. The sprite can also be moved with the second controller's D-Pad. Pressing A sets "DEF" to "YES", while B sets "DEF" to "NO" and sets the player's sprite back to its normal position. To go back to the title screen, press Start.

Oddly, no credits are seen throughout the whole game, not even accessibly with cheat codes or passwords. However, credits do exist starting at 2A365.